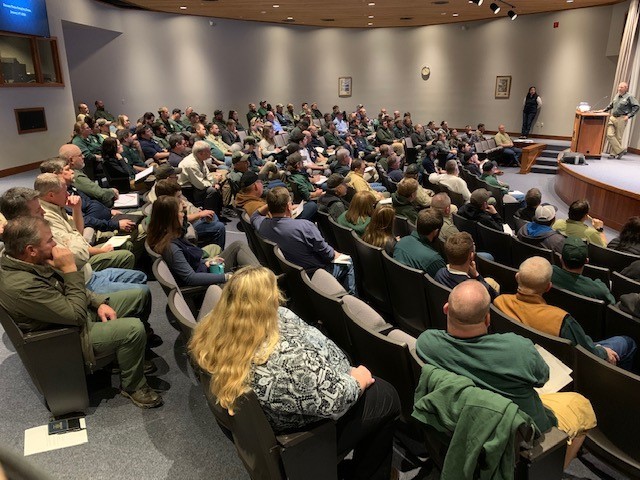 Feral hogs are invasive, destructive pests that roam wild in certain areas of Missouri and other states. They’re aggressive animals known to prey on turkey poults, fawns, freshly seeded fields, fully mature crops, as well as other wildlife. They’re known to carry diseases that can be transmitted to humans, dogs and domestic pigs such as swine brucellosis, pseudorabies and others.

“This unified interagency effort is critical to eliminating feral hogs on and around the Mark Twain National Forest,” said Amy Salveter, the USFS Public Services Staff Officer representing the MTNF on the unified command team. “We look forward to working with our partners to rid the Missouri landscape of this dangerous and destructive pest.”

“Winter operations will be a large-scale effort where we will scout thousands of acres of public and private lands to pinpoint locations of feral hog sounders, identify areas that do not have feral hogs so we can place the area lower on the priority list, and to trap and dispatch the hogs we find,” Jensen said.

The Partnership’s mission is to eliminate feral hogs in Missouri by implementing the Statewide Strategic Plan for Feral Hog Elimination. This is a strategic incremental approach, clearing each watershed inhabited by feral hogs one at a time.

Land management agencies used public recreational hunting as the primary means by which to eliminate feral swine in Missouri from the early 1990s until 2016. Recreational hunting proved to be an ineffective strategy that resulted in the further spread and establishment of additional populations of feral hogs.  Beginning in 2016, agencies involved in the Partnership significantly increased feral swine removal efforts and put in place hunting prohibitions consistent with the Statewide Strategic Plan for Feral Hog Elimination. This has resulted in the total elimination of feral swine from 116 watersheds totaling over 2.7 million acres previously occupied by feral hogs across Missouri.

Although the feral hog problem in Missouri increased in the 1990s when hog hunting for recreation gained popularity, DNA research suggests the feral hog population has since spread via truck and trailer, not through natural migration of the species. As groups began raising and promoting European wild boar for hunting, some of them were released intentionally on public land.

Even two feral hogs introduced into a new area is a big problem, because they’re highly adaptable and prolific breeders; their numbers grow at an alarming rate. One sow can give birth to two litters of about six piglets twice per year, resulting in a population growth rate of about 166% per year. The Conservation Department has received damage complaints from private landowners since the late 1990s. Today, feral hog populations are established in over 30 Missouri counties.

Efforts on private land are only conducted at the landowner’s request and as a partnership with the landowner. Landowners will receive assistance from MDC and USDA employees to trap and remove the feral hogs. Success of the winter operation will be measured in acres covered by staff, sounders of hogs located, sounders of hogs removed, and number of landowners serviced.

“A large majority of Missouri’s land is privately owned, so working together with private landowners is vital to the success of eliminating feral hogs from Missouri,” Jensen said. “If you’re a private landowner and feral hogs are tearing up your land, we want to help you.”

Jensen stressed that complete success will take time. The strategy is to pinpoint the location of a sounder and remove the entire sounder, keep feral hog numbers from increasing in the heart of the population and stop the spread of feral hogs into new areas. Technicians will strategically remove feral hogs along the perimeter of the known hog population, shrinking it until the hogs are eliminated.

For security reasons, the Partnership is not releasing locations and exact dates of trapping operations.

“We’ve experienced vandalism, theft and interference at trapping sites in the past, so it’s important not to invite that sort of attention to these efforts,” Jensen said.

Jensen said this initial effort will take place from January through March because it’s an optimal time due to limited food supply. However, feral hog elimination work will continue in the summer months, when the feral hogs are known to root up crops.

“Knowing the habits of these invasive animals helps us to adapt our strategy to eliminate them at specific times of the year. While we are increasing efforts at this time we still have staff that are working with landowners to eliminate hogs on their property every day. Increasing efforts when hogs are vulnerable will allow us to strategically remove more hogs from Missouri’s landscape,” Jensen said.

Report feral hog sightings or damage, and learn more about feral hog elimination at www.mdc.mo.gov/feralhogs. Sign up to receive updates from the Missouri Feral Hog Elimination Partnership at https://short.mdc.mo.gov/ZoP.