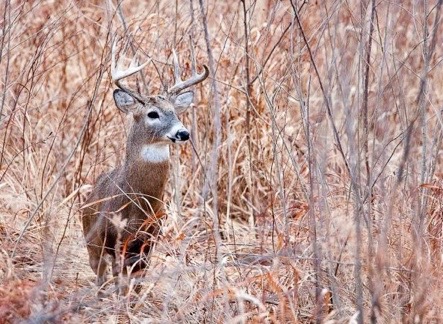 Top harvest counties for the overall deer season were Franklin with 6,247 deer checked, Callaway with 5,703, and Texas with 5,157.

While the total deer harvest was down slightly from the year before, the archery deer harvest was considerably higher this year. According to MDC Cervid Program Supervisor Jason Isabelle, season timing was a factor.

“The shift in the calendar this year with Thanksgiving occurring later in November resulted in archers having an extra week of prime hunting before the November portion of firearms season started,” Isabelle explained. “These extra days of hunting during the rut when bucks are particularly vulnerable to harvest, and an increasing trend in the number of archery hunters, contributed to a record year of archery deer harvest.”

Isabelle added that the calendar shift caused the November portion of firearms season to occur a week later than last year and during peak breeding when buck movement is reduced.

“As we get closer to the middle of November, bucks simply don’t have to move as much in search of receptive does as they do earlier in the month, making them less vulnerable to harvest,” Isabelle explained. “Whenever this shift in season timing occurs, we expect a decline in harvest during the November portion of firearms season, which is when most of each year’s harvest occurs.”

Top harvest counties were Callaway with 315 deer harvested, Franklin with 297, and Pike with 261.

The harvest total for last season’s alternative-methods portion was 12,109.

For more information on this season’s deer harvest totals, visit the MDC website at extra.mdc.mo.gov/widgets/harvest_table/ or for past years, visit huntfish.mdc.mo.gov/hunting-trapping/species/deer/deer-harvest-reports/deer-harvest-summaries

For more turkey harvest information for the current season, go online to extra.mdc.mo.gov/widgets/harvest_table/ and for past turkey seasons, visit huntfish.mdc.mo.gov/hunting-trapping/species/turkey/turkey-reports/turkey-harvest-summaries-past-seasons