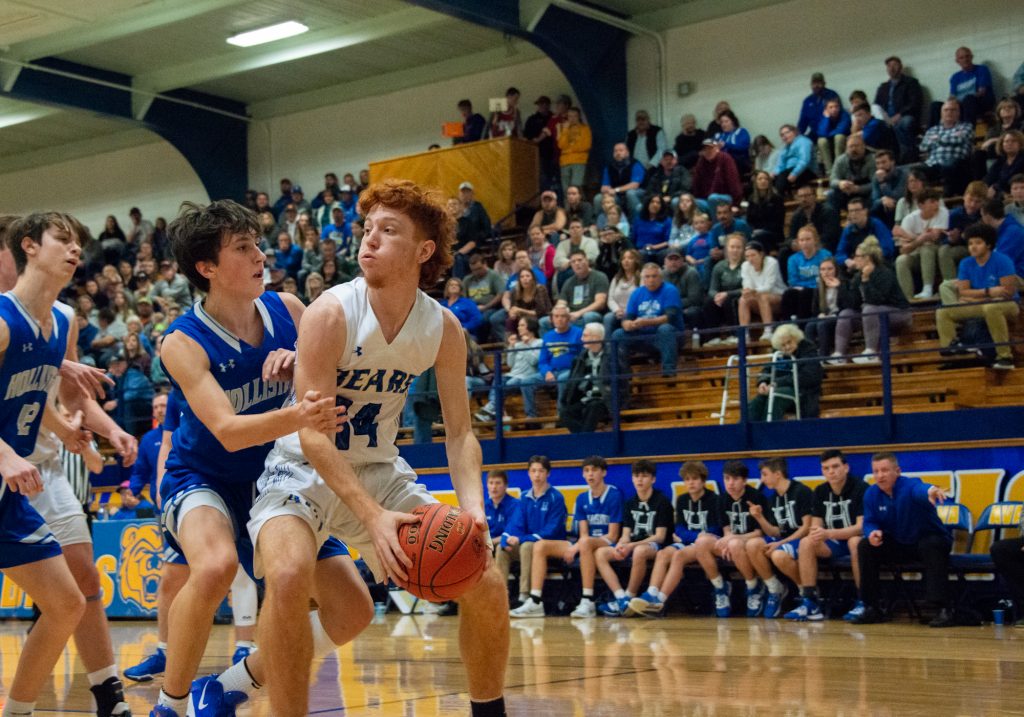 Ava High School junior Zack Mendel (14) looks for an open teammate as he is stopped near the paint by the Hollister defense on Friday, January 10, 2020, in Ava, Missouri. (Jason Hoekema/Herald)

A cross court pass to Blake King with the solo layup sealed the 47-35 win over the Hollister Tigers on a stormy Friday night. It did not, however, start that way.

Not to be confused with “Five Stars,” the Bears were a near no-show in the first quarter allowing 11 points to the Tigers as a quiet fell upon the stands.

Shooting efficiency was dismal, shots bouncing off the glass and three-point attempts hit like bricks and back into the hands of defending Tigers.

“I wish I had the answer to exactly what (caused it),” said coach Damon Seiger post-game. “Even though we’ve been in here busting our tail for the last six days in practice, you can’t implement game play. I was a little concerned coming to this one because we had been off for such a long period.”

The Bears’ last appearance was in a third round of play at the Blue & Gold Tournament on December 28.

“We had a slow start,” said Seiger. “I do feel like it benefited us to have those six days because prior to then we had had only eight days collectively as one (team) with our football guys. So, we had almost as many practices prior to this game as what we have had all year long. That’s a big sign in itself and hopefully a big step for us.”

Even with a small spark on defense with a denied layup by Jacob Gillies, the Bears were throwing water on a smoldering fire instead of the gasoline they need to catch fire.

Call it rust, but the Bears shot a .250 from the stripe in the first quarter. A far cry from the team’s overall season free throw average of .681. Even Andrew Dalton missed his first two on a foul drawn from Wylder Wilson.

“We missed a lot of shots around the basket,” said Seiger. “I think on most given nights, those are makes. Tonight, they just didn’t go down and when they don’t go down you’ve got to find ways to be successful in other areas.”

Hollister didn’t run away with the game early, either. With a six-point lead going into the second they just needed to keep winning quarters to win it as long as the Bears didn’t show up.

The Bears changed their tune, or tuned-in, to the game and came up with an 11-9 second quarter. Even with the small victory they trailed 20-16 going into the halftime break.

Buckets started to happen as the stubborn rock started hitting the net with deuces from Blake King and Blayne Mendel.

It was a fast break pass to the other end from Mendel to Swofford which showed the spark of usual Ava Bear Basketball with 1:30 left in the half.

After the Break the Bears came out of the locker room in a fury.

Ava swelled to a 15-6 third quarter on a 15-2 run out of the gate. The take down started with a shot from downtown by King to bring the Bears within one while the defense moved to zone for a change in tempo.

Dalton had himself a game in the third with ten points on top of eight in the first half. Four buckets and a pair of singles drawn from Cole Jones put Ava back in the black, 31-26.

Jacob Gillies again came up big on defense with another denial of a Hollister layup, a sign of sorts of what was coming.

“I think the tempo of the game kind of aided both teams,” said Seiger. “When we had the tempo, more of the pace we wanted to play, it benefited us. You saw us go up, then when the game slowed down and kind of become that grinder in that zone in which they run the game it swung back in their favor.”

More than triple the first quarter score, the Ava Bears kept the pressure on with a rocket across the court from Dalton to King who put it in for two.

Swofford also picked up a bucket, a bouncer which finally sunk before he drew two one-and-one fouls from Colby Teaster and Ethan Lemaster for four points.

Swofford was perfect from the line Friday, scoring six in the fourth quarter.

Defensive pressure was up for the Bears, apparent with a pop-out forced by Swofford and buckets in transition being made all while drawing three trips to the charity stripe.

The defense earned praise from coach Seiger for helping hold the Tigers to 35 points.

The lead started with a long ball by Blayne Mendel giving the Bears a two-point buffer.

In addition to the first quarter woes where the Bears dipped below by as much as seven, they also had to manage a surge from the Tigers which put them back in the red by five early in the fourth.

Thanks to the pass to King and the bouncer from Swofford the Bears took the rest of the game to the line as Hollister fouled the Bears and gave up an additional five points in the fourth.

To add the cherry to the icing, Blake King took a pass and found himself all alone on the other end to cap off the match with a solo game-sealing layup before the buzzer in a complete 180 from the first quarter.

“It was just basically being who we are,” said Seiger. “I didn’t feel the first 16 minutes was who we are at all. I think the guys knew that, came out and responded just to that. We talked about what they had done to them last year when Ava was up, 31-19, going to the half and Hollister ended up coming out and taking care of them. I said, here’s our opportunity. We had our bad 16 minutes. Let’s go out and play better basketball for the next 16 minutes and see where we’re really at.”

Andrew Dalton leads in scoring with 202 points and is shooting a .844 from the line as of Friday’s game against Hollister. The Sophomore has hit three from downtown and has been brutal from the stripe with 54 point on fouls drawn.

Springfield Hillcrest learned that lesson in a hard way as Dalton took them to the line for 16 points, seven in the overtime periods.

Blake King is also a major contributor with 75 points this season from 18 deuces and eight threes.

Leading in threes is Quinton Donley with 13.

Donley has become a bit of a specialty player and can be devastating from outside as we learned from the start against Gainesville where he hit the net four times for the win and again with four against Hillcrest during the 2019 Blue and Gold Tournament.

Jacob Gillies chimes in with 78 points this season and is the length needed in the post where he has chipped-in 33 buckets and drawn fouls for another 12 points shooting a .571 from the stripe. 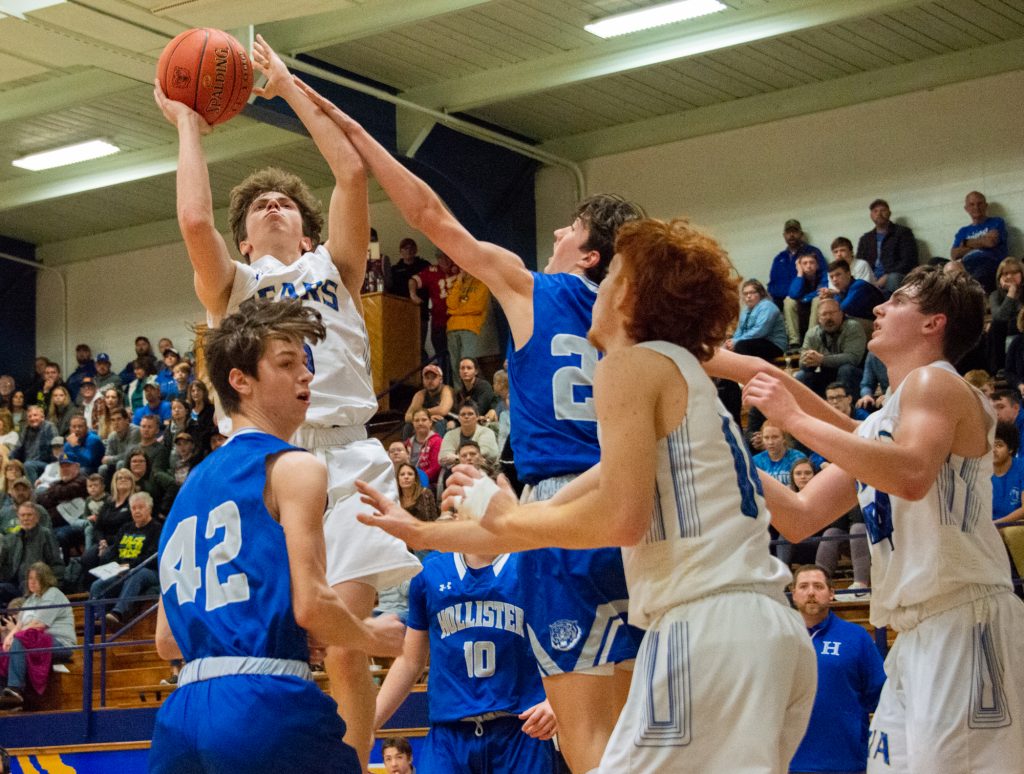 Ava High School senior Nate Swofford (5) elevates for an attempt at the hoop during a game against Hollister on Friday, January 10, 2020, in Ava, Missouri. (Jason Hoekema/Herald) 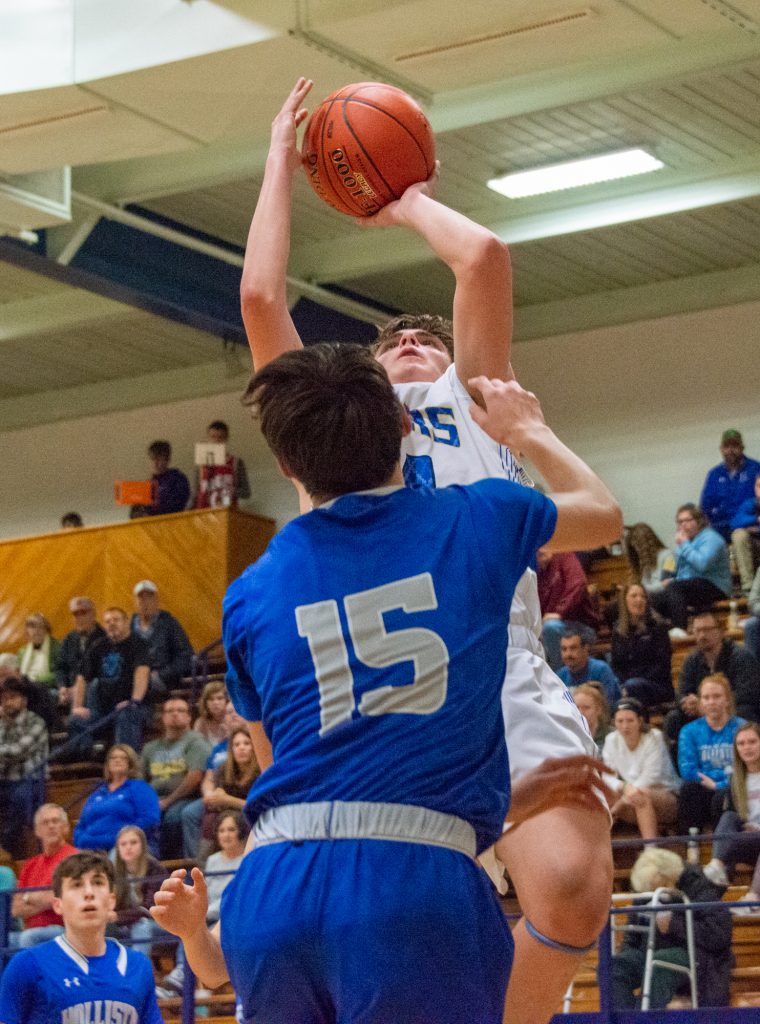