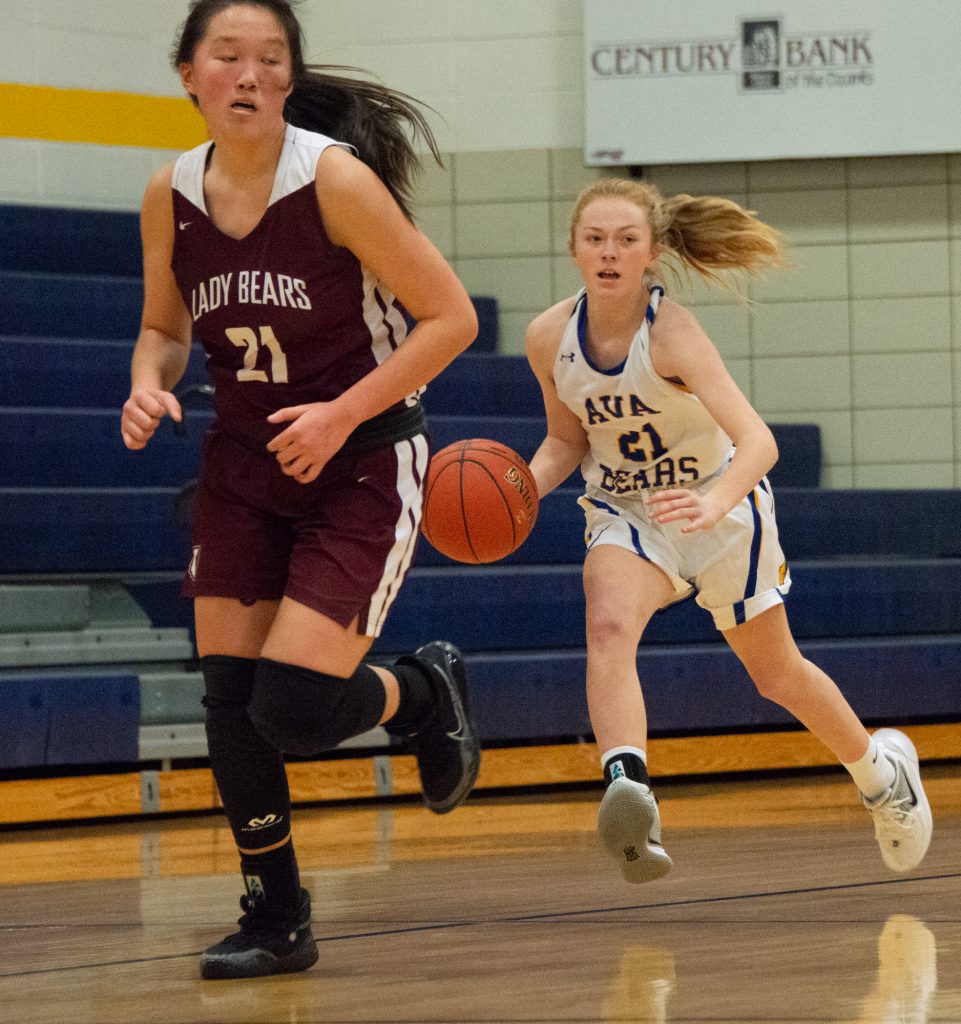 Ava High School freshman Lexie Gastineau (21) moves the ball down the court during a game against Willow Springs on Monday, January 13, 2020, in Ava, Missouri. (Jason Hoekema/Herald)

Hannah Evans missing off the starting five was an attention getter Monday as the Lady Bears hosted Willow Springs and kept the victory at home, winning 54-33.

Evans had suffered a fall during the game against Mansfield and was concussed according to coach Nathan Houk. He hopes for her return today against the Thayer Bobcats.

The takedown created by the younger players on the roster helped foster a 20-point lead going into the half where Houk said, “we never looked back.”

Claire Fossett got the tempo going early with eight points in the first quarter, 16 overall. Her second highest count this season.

Sync that performance with buckets from Baylan Alexander and threes from Emaly Keyes and Olivia Gastineau and you have an idea of how the 18-8 first quarter went down.

The Lady Bears didn’t layoff, either. Fossett worked for another six before the break as the Lady Bears continued to surge in the 14-4 second quarter.

“Claire got us going offensively by hitting shots,” said Houk. “When that happened, we just started clicking and got off to a good lead in the first and then had a 20 point lead at half and really never looked back.”

Alexander was the star before the break with an offensive rebound for two, rebounding something the Lady Bears were struggling with early on.

Willow Springs had ample steals and rebounds, but the ball would not go in while pressured by the Ava defense.

The shortest player on the Willow Springs roster was arguably the most athletic, putting in the work and finding a way through the paint for eight points Monday.

The Lady Bears dropped the third quarter to Willow Springs, 13-11. However, with the 20-point lead Ava had going into the half, there was no coming back from it unless you’re Patrick Mahomes and the Kansas City Chiefs.

Fossett cooled in the second half with one big assist to Alexander and a bucket of her own before the junior members of the roster hit the maple and took over, still outscoring Willow Springs 11-10 in the fourth quarter.

Beside the turnovers made by the Willow Springs defense, the Lady Bears were at .400 from the stripe, a season low sconded by a .470 against Stoutland at the New Covenant Tournament.

The margin could have been narrower had Willow Springs shot better than .545 from the line. They were still able to take six points from Ava on fouls.

Buckets in transition were hard to come by for Ava after the break. In back-to-back occurances the Lady Bears were able to get the ball to the other end, but one resulted in a steal by the Willow Springs defense and the other a turnover when Eden Little couldn’t get to the ball quick enough to keep it from going out at the baseline.

With the comfortable, 20-point lead some of Ava’s up-and-coming were sent out on to the maple for positive minutes in Monday’s game.

“I was really proud of our kids,” said Houk. “The way they stepped in, stepped up and filled spots. I thought Baylan did an outstanding job coming in and defending the low (post) for Willow. She’s an outstanding post player.”

Keeley Akers was sent in to handle the post and put two buckets in back-to-back while Sara Mendel was able to play and sink another.

Lexi Gastineau worked for three points, bringing her up to 19 on the varsity books this season. Akers is now at seven with positive varsity time while Celia Fossett and Mendel are at four a piece.

Collectively the team has played for 524 points, closing in on last year’s total of 965. In the previous season the team shot a collective .590 and are still on top of that statistic this year with a .619 from the stripe.

Hannah Evans tied herself into the record book on January 6th with four three-point shots in a single game. She joins Emaly Keyes who also holds a record-high of four in one contest.

The school record belongs to former Ava High School athlete, Kelli Bilyeu with six in a game against Licking in the 2009-2010 season and Baily Lee with six during the 2012-2013 season.

“There are some things we can work on,” said Houk. “(We can) finish in boxes, boxing out, rebounding and taking care of (the ball). We’re a young team. To be able to come away with a win like that when you’ve got freshmen and sophomores out there, a lot of the time, it’s very encouraging.” 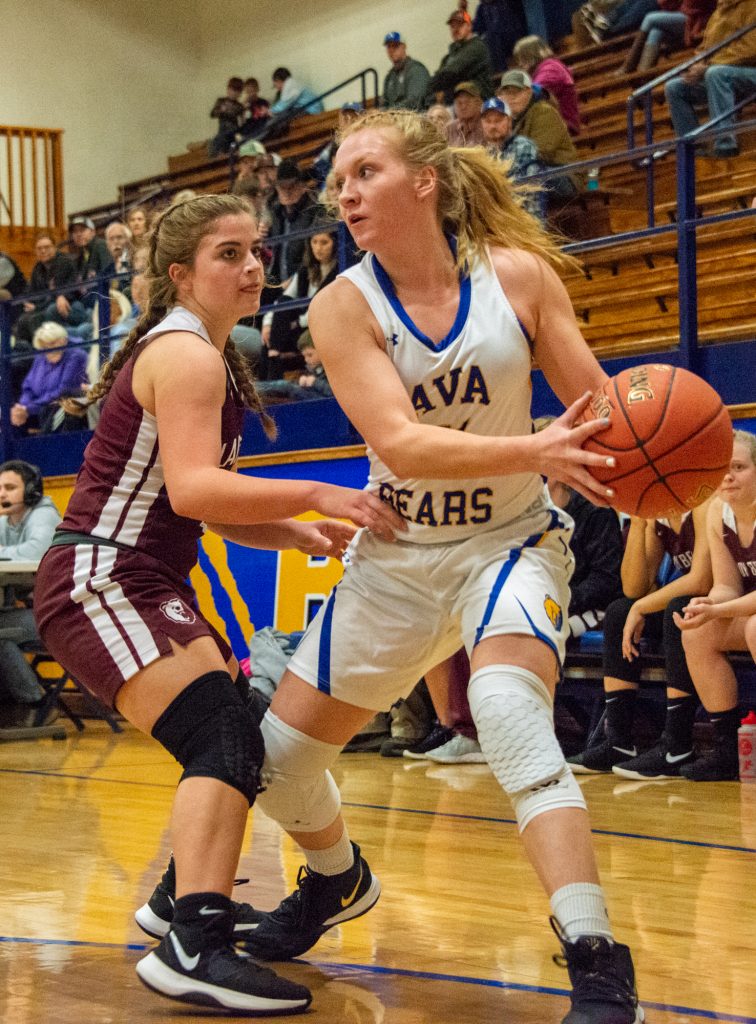 Ava High School senior Eden Little (51) holds the ball in the corner waiting for an open teammate during a game against Willow Springs on Monday, January 13, 2020, in Ava, Missouri. (Jason Hoekema/Herald)