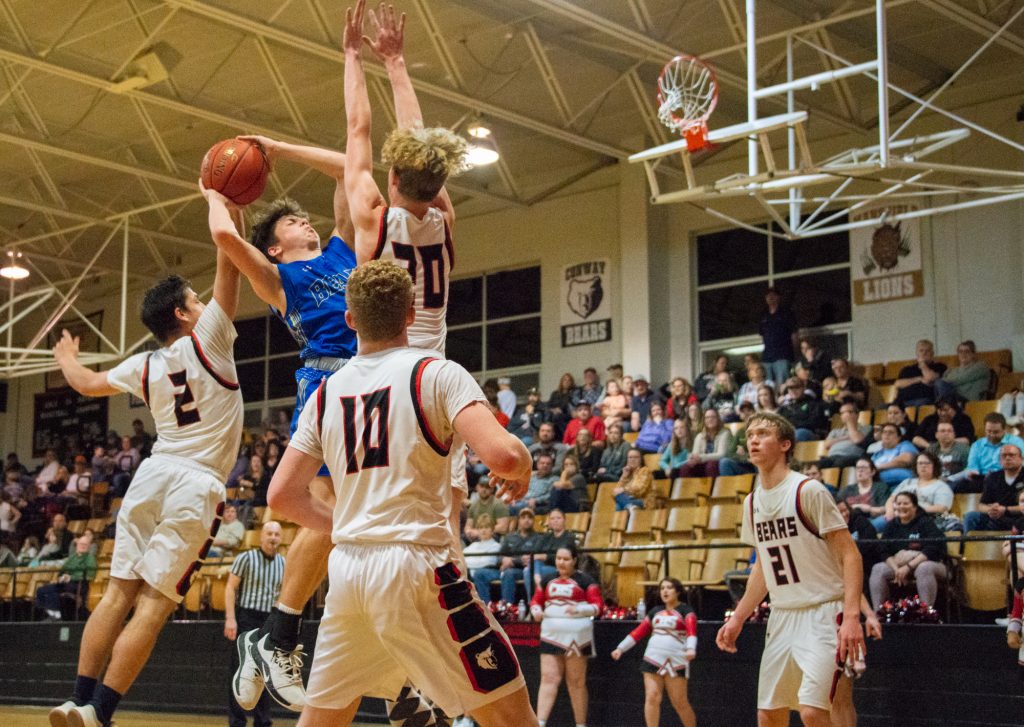 Unleashed is the term to describe how the Ava Bears came out at the start of Tuesday’s game on the road against Conway. Quickly, the Conway Bears found themselves in a corner led by Ava, 24-12 at the end of the first quarter.

Five three-pointers made the net in the first half making 15 of Ava’s 41 points at the break. Blake King, Nate Swofford and Kaden Bruce each hit the net from the arc, Swofford twice in Tuesday’s runaway game.

In total, Ava turned Conway’s game on its end after seeing the team at the Mansfield Tournament earlier this season.

In that game Conway went outside for nine three-point shots. This time around the Ava Bears hit seven from outside while also working the defense to limit shots from Colby Vavruska, Andrew Dame, and James Shockley to just six this game.

A three from Vavruska ended a 9-2 run by Ava out of the gate but improved shooting efficiency put the Ava Bears on top, big, and in a hurry.

The arc was not the only place where action was seen. In the midst of dropping threes the Bears worked the paint on Conway for 22 buckets.

Last time the two teams met Ava had dominated in the lane and up close by out shooting Conway 19-6 from inside. Tuesday wasn’t much different with Ava’s 44 points inside the Conway defense.

Swofford came up with an impossible shot as he dodged traffic in the lane and hit the bucket for two in the first quarter.

Blake King took the inbound on a well-designed play and hit the bucket for three from the wing and put up 19 for the Ava Bears.

Andrew Dalton went big this game after he was limited to just 14 points in the teams’ last meeting. This time around the sophomore worked the floor and put up 22 points for the Bears.

Nine of those were in the fourth quarter where Ava had a lead of over 20 going into the end of the game.

The Bears were able to recreate the offensive onslaught coming back out of the locker room at the break.

With twos across the roster and two more three-pointers by King and Quinton Donley the Ava Bears racked up another 24 points, shocking Conway and holding them to just nine in the third quarter.

Fouls crept up quickly for Ava with Jacob Gillies and Blayne Mendel in the first half. Each with three personal fouls before the break.

Although Gillies had to sit out the final six minutes Tuesday after fouling out, the Ava Bears were able to draw the whistle in their favor for 15 points.

Had shooting been as good as it was against Springfield Hillcrest, the Ava Bears could have stunned Conway with several more than the 80-57 final.

Things did cool slightly in the fourth, but Dalton came up with difficult shots, one which a swipe from Conway’s Jake Vestal may have helped the ball in a bit.

After the horn, three Ava Bears were in double digits. Dalton led with 22, King with 19, and Swofford with 11.

Some up-and-coming players got to see some positive time on the maple as well with Zach Mendel scoring eight, Bruce six, and Donley with 5. Dylan King picked up two as did Blayne Mendel and Kayden Myers who filled-in the post after Gillies fouled out.

“I told our guys that it’s time we start playing the way we’re capable of playing,” said Seiger. “We’ve seen flashes of it, but we haven’t seen the consistency of it, and we haven’t had the greatest of starts. Third quarters have usually been pretty good to us. But the start has not been. Understanding that getting out early – and I think we were up 9-2 right at the gate. Once you can do that, it really sets a tone for the rest of the half. We let them get back in a little bit, but in the second half we put the hammer down and said we’re done, and we’ll take this over.”

Andrew Dalton has kept climbing the record book with 710 career-points as of the Conway game. The sophomore has passed Josh Dalton who had 700 career-points from 1995-1998. The current all-time record sits with Pete Leonard who scored 1,744 points between 2007 and 2011.

The Bears move up to 9-3 with 686 points this season. They host SCA rival Mountain Grove at home Friday. 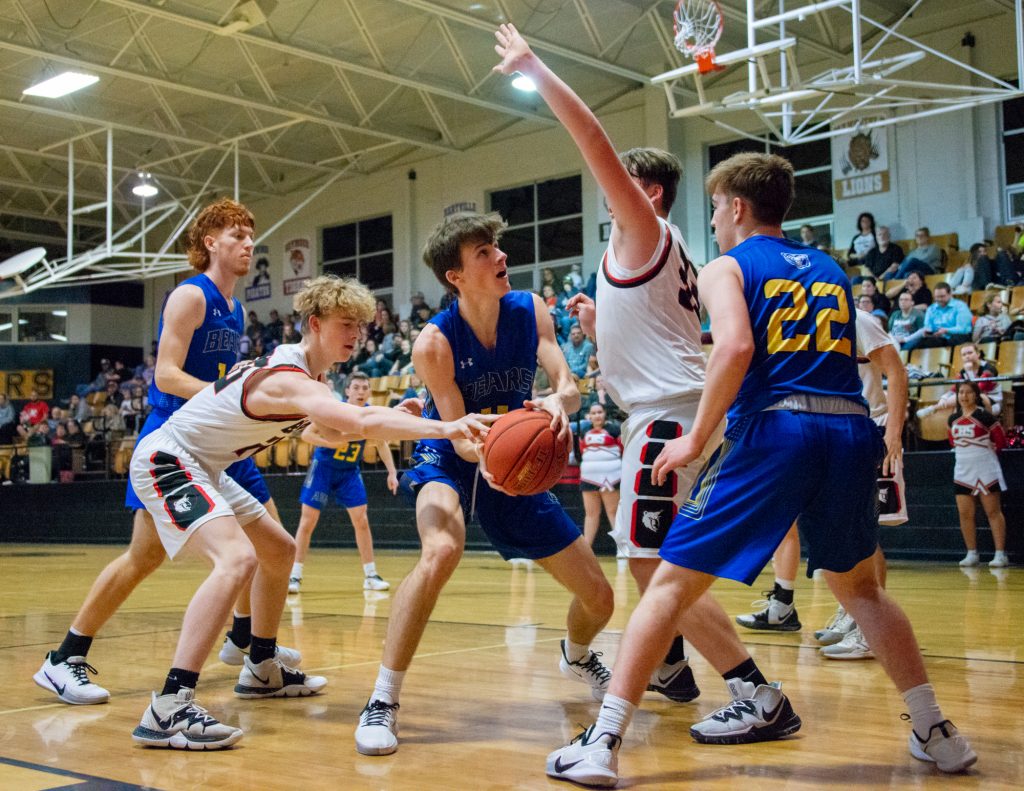 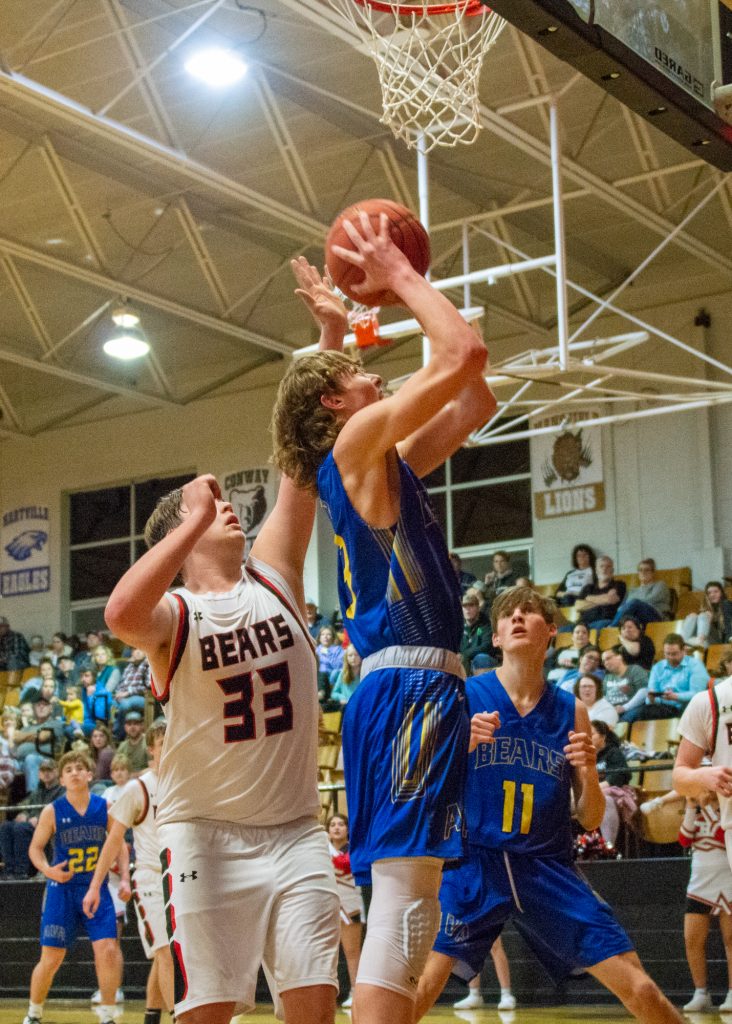 Ava High School senior Blake King elevates for an attempt at the bucket during a game against Conway on Tuesday, January 14, 2020, in Conway, Missouri. (Jason Hoekema/Herald)