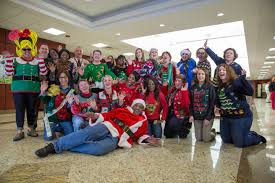 WASHINGTON, D.C. – The holiday season brings out the selflessness in people as they go about their preparations for Christmas and Hanukah, and that’s a good thing. But, says the Association of Mature American Citizens [AMAC], it can also bring out a funnier, quirkier side in some individuals and institutions.

A lot of good deeds are done this time of the year, like the one Zellie Thomas and his friends in Peterson, NJ concocted recently. They met up at a local IHOP restaurant for a holiday gathering recently and left a whopping $1,200 tip for their waitress. The gesture was well appreciated by their server, as you might expect. But, Thomas is hoping the idea will go viral. He tweeted this message to the world: “If you and your friends have the capacity and heart to pool your money to give a large tip to a waitress this holiday season that you know deserves it. I encourage it. You’ll be surprised how many of your friends would be supportive of the idea!”

There are also those achievers who seek to stand out as they celebrate the season. For example, it was all about Christmas trees in Mason County, WA, where logging and holiday recreation are mainstays of the economy. So, the Chamber of Commerce decided to prove Mason County is, indeed, “the Christmas tree capital of the world.” They gathered 797 fir trees in one location, decorated them and got the nod from Guinness that they, indeed, deserved to be in the Record book. The previous record was set in 2015 by the Hallmark Channel, which created a maze consisting of “a mere” 559 illuminated tree.

After all, it is a festive season, a time for good food and celebratory gatherings. For example, Christmas Eve is known in Spanish-speaking countries as Nochebuena and is celebrated by a dinner featuring roasted pig. But two lucky pigs in Miami, FL, Peppa and Petra, have a much better fate in store. They were rescued from the slaughterhouse and received a pardon from Mayor Carlos Gimenez and will live out their lives at the Aguacate Sanctuary of Love. The pardoning ceremony took place at Miami’s Latin Cafe 2000, a restaurant known for its vegan fare.

And then there are those who seek to commercialize the occasion.

Take Alaska Airlines, for example. They are offering priority boarding to passengers who show up wearing ugly Christmas sweaters. “We love going above and beyond to make your trip memorable; celebrating Ugly Sweater Day is just another way we’re making the holidays a priority,” according to the marketers who came up with this stunt.

But, perhaps, it is Walmart that takes the cake when it comes to stunts that don’t quite capture the reason for the season, says AMAC. The retailer’s Canadian Web site was forced to issue a public apology when it featured a “tacky and truly ugly Christmas sweater” at its online store. It featured a Santa apparently touting the ‘benefits’ of cocaine. It was adorned with a likeness of Santa and the caption, ‘Santa really likes to savor the moment when he gets his hands on some quality, grade-A, Colombian snow’.”

Walmart quickly took the product off its site, noting that it was offered by a third-party seller and apologizing “for any unintended offense.”