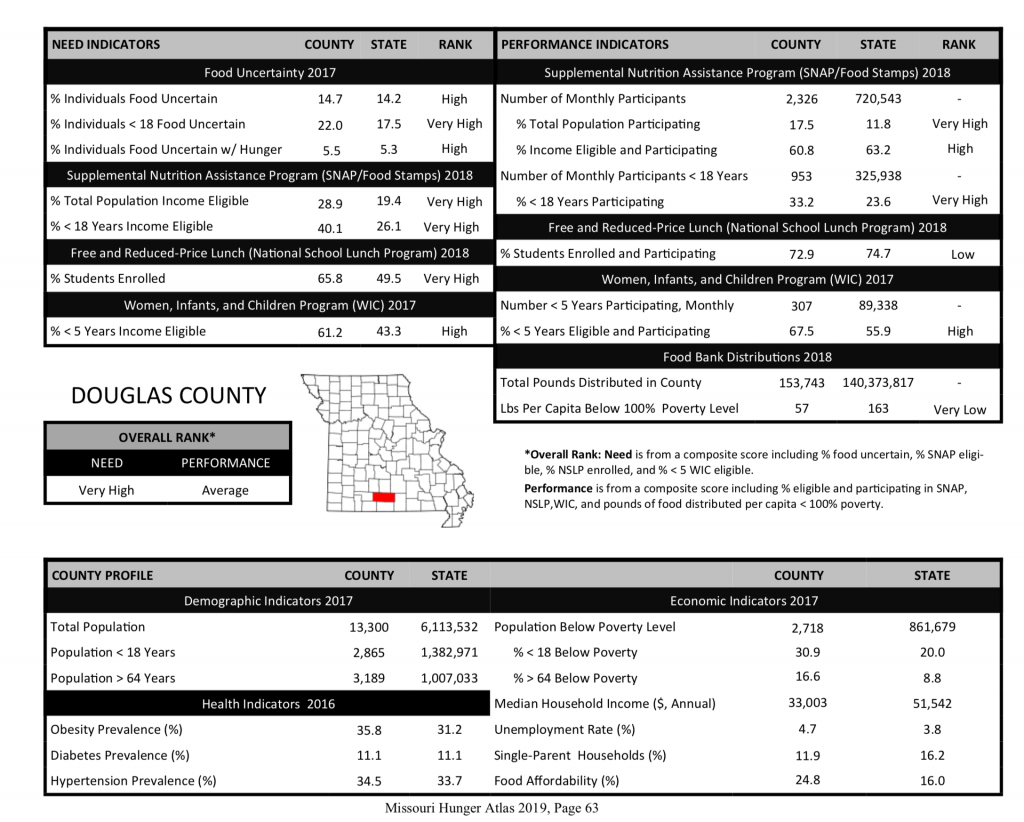 From the University of Missouri Extension, southwest region

“The Missouri Hunger Atlas,” published every three years by the University of Missouri Interdisciplinary Center for Food Security, assesses food insecurity and hunger for the state of Missouri on a county-by-county basis.

Food Security is defined by USDA as “access by all people at all times to enough food for an active, healthy life.” Access to food means having the ability to obtain a variety of affordable, high-quality food within each person’s community.

“Those who are food insecure generally lack resources for food purchases at the household level. There is a strong connection between poverty and food insecurity, with poverty being the best single predictor of food insecurity,” said Duitsman.

Forty million Americans, which is 11.8 percent of the population, lived in food insecure households in 2017, including 15.7 percent of all households with children. Those most at risk (4.5 percent of households) experience “very low food security,” meaning that members of the household experienced a reduced food intake due to lack of money and other resources to acquire sufficient food.

The report indicates Missouri’s statistics have improved since the 2016 report, but are still worse than they were prior to the Great Recession, which began in 2008.

Over the last three years, the state has averaged 12.8 percent food insecurity and 4.8 percent very low food security – both higher than the national average. Clearly, access to nutritious food remains a critical issue in many of our Missouri communities.

“Nearly one in seven individuals lacked reliable access to sufficient quantity of affordable, nutritious food, with the most vulnerable populations including children and the elderly” according to the study.

“The Missouri Hunger Atlas” report also evaluated how well public programs are doing to meet the needs of Missouri’s Food-Insecure citizens. The report contains maps for every county in Missouri, each containing data to provide a picture of Food Insecurity and measures of “performance”— an assessment of how well that county is doing to meet the needs of their food-insecure citizens.

The Hunger Atlas is just one example of how the University of Missouri is working on food security in Missouri. The Interdisciplinary Center for Food Security recently received $250,000 from Feeding Missouri to conduct the first comprehensive statewide study of Missouri households using food pantries linked to the state’s six regional Feeding America food banks.

Other initiatives include interdisciplinary research and nutrition and health programs that are offered in all Missouri counties through MU Extension.

In addition, since 2016, MU students have volunteered in eight food pantries and seven community gardens in Missouri as part of a student-led program from the University of Missouri: Mizzou Alternative Breaks. The program sends groups of approximately twelve students on trips around the country over weekends, Thanksgiving, spring, summer, and winter breaks to volunteer at various places in need.

The 2019 Missouri Hunger Atlas is a public service of the University of Missouri and used by many individuals and private and public agencies around the state. The Atlas includes county specific information for all 114 Missouri counties and the city of St. Louis, and is available online at: http://foodsecurity.missouri.edu/projects/missouri-hunger-atlas/.