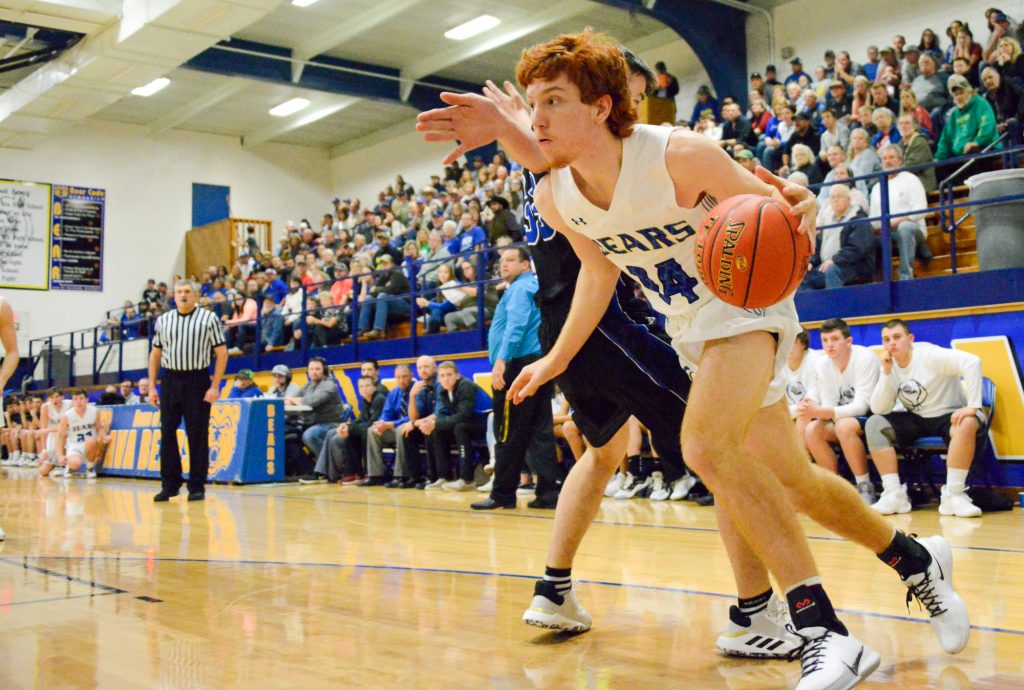 Ava High School junior Zach Mendel (14) moves out of the corner before a Forsyth defender can trap him Friday, December 20, 2019, in Ava, Missouri. (Jason Hoekema/Herald)

The Ava High School Bears basketball team hosted Forsyth Friday at home and sealed the 64-51 win early in each half with high defensive pressure forcing turnovers and the inevitable buckets on the other end.

With the number of turnovers going in favor of the Bears, it is possible that one of the key players in Friday’s game may have put the work in for a double-double or might have come close.

With Jacob Gillies opening up his skillset this year on the varsity roster the now senior has been putting up some points this season. This year he is second only to Andrew Dalton in scoring with 23 points as of Friday.

Dalton continues to be a force to be reckoned with after he put up 20 points Friday, ten on the Panthers’ charity with perfection from the free throw line.

On top of the 30 points between Dalton and Gillies Nate Swofford found himself inside and often for 15 points against Forsyth, but the double-digit scoring does not stop there.

Senior Blake King was able to make the Fastbreak from passes a couple of times to get in past the Panther defense. In one instance he found himself open as the team was in motion trying to get an offensive scheme going and hit the bucket from afar to set the tone and momentum for a big 18-10 third quarter.

Gillies has hit the double-digit mark three times this season but has also played secondary roles as the team pushes forward, 5-1, in the 2019-2020 season.

“I’ve been extremely pleased with (Gilies’) play early on in the season,” said Seiger. “He is very capable. I don’t know where he was at on the rebounding number tonight, but it looked like he cleaned up the glass pretty well.”

One of the issues plaguing the Panthers were fouls. Six of the Forsyth players fell into foul trouble as the team stacked up a total of 23 fouls. Two of those players were in hot water going into the mid-fourth quarter with four fouls each.

The fouling situation sent Bears to the line 16 times for 25 attempts throughout the game. The Bears shot a .680 from the line, Swofford and Dalton perfect in their follow throughs.

“We Weathered the storm there at the end,” said Seiger. It was good that we were able to do that and make free throws when they counted.  Testament to our guys, looks like we shot a pretty good percentage. I know in the first half, we missed four and we missed four straight in the second half. “

This year the Bears have been taking the walk over to their bucket for 49 points. However, the team continues to shoot a collective .662. Dalton is shooting a .944, but the team is missing out on points missed at the line.

With Ava players aggressive in the lane the whistle came often and created momentum for the Bears with celebrations fueling the group after drawing fouls for the and-one on five occasions.

On the other end, even with full and half court pressure on the Forsyth offense the Bears managed to keep fouls to a minimum by committing just 12 total through the game.

This, of course, leads to fewer extras for the opponent. Ava gave up just seven points to a team that shot .875 from the line.

Aside from the few fouls afforded to the Panthers the Ava Bears made shooting difficult with one exception. Jordan Letterman, a 6’2” senior forward, was able to get into the paint and created shots in spite of the defensive coverage.

“(Letterman is) a kid that basically takes advantage of weak side rebounding type stuff,” said Seiger. “There is something to be said for kids who just play hard.”

Totaling 17 points in Friday’s game Letterman was an issue until the fourth quarter where he fell deep into foul trouble and shot for just three points.

Even when Letterman shot for six in the Bears’ biggest quarter (18-10) the Bears defense was part of the win by shutting him down and Gavin Lux who ballooned in the second.

Blake King got a bit of revenge against the Panthers after a layup shot was hit out of his hands in the third. The denial came full circle when he responded in-kind to Letterman who got the break and attempted the layup.

The pressure put on the Panthers came up with some big breaks for the Bears. In the second the full-court pressure led to a panicked pass which went out and turned over to the Bears.

In the third quarter the Panthers had six but failed to get anything else on for a couple of minutes until 3:05 was left.

In rebounds is where the potential for a double-double existed. Dalton was taking the Panthers to the line and made 20 points but was also under the steel for the rebound which was part of Friday’s win.

The constant turnovers to the Bears, including a slip and out-of-bounds fall in the fourth kept finding their way into the hands of Dalton, Gillies, and Swofford who put up a collective 14 buckets.

“I watched little film from last year’s game,” said Seiger. “I think there were some things which they did well, but there were also some things that we needed to clean up. (Forsyth is) not afraid to punch you in the mouth. They play hard and get up and down the floor and just get after it. So, kudos to our kids.”

Ava was clearly the more athletic team Friday, even in the midst of the most physical game the Bears have played this season, and were breaking past defenders as Forsyth kept pushing the man-to-man coverage although the Bears kept cutting in.

Things flipped on the Bears a bit in the fourth quarter. Starting the final eight minutes of regulation Ava held a 51-36 lead.

Coach Seiger knew the pressure was coming, but it was up to the Bears to keep the lead until the horn.

“That’s usually how you want to play,” said Seiger. “You want to lead through three and then you want the other team chasing you for a quarter. We knew what was going to happen. I told them at the start of the fourth quarter. Get ready. Here comes full court pressure stuff.”

Ava was held to just six points on the floor. The other seven were given up by the Panthers late as the clock ran down.

The gap closed to seven with just over one-minute left in the quarter, however Forsyth kept fouling and gave up the double bonus with 5:40 left in the fourth.

It hurt the Panthers with Ava making six trips to the stripe for the final boost in addition to two buckets to keep at least a ten-point lead. 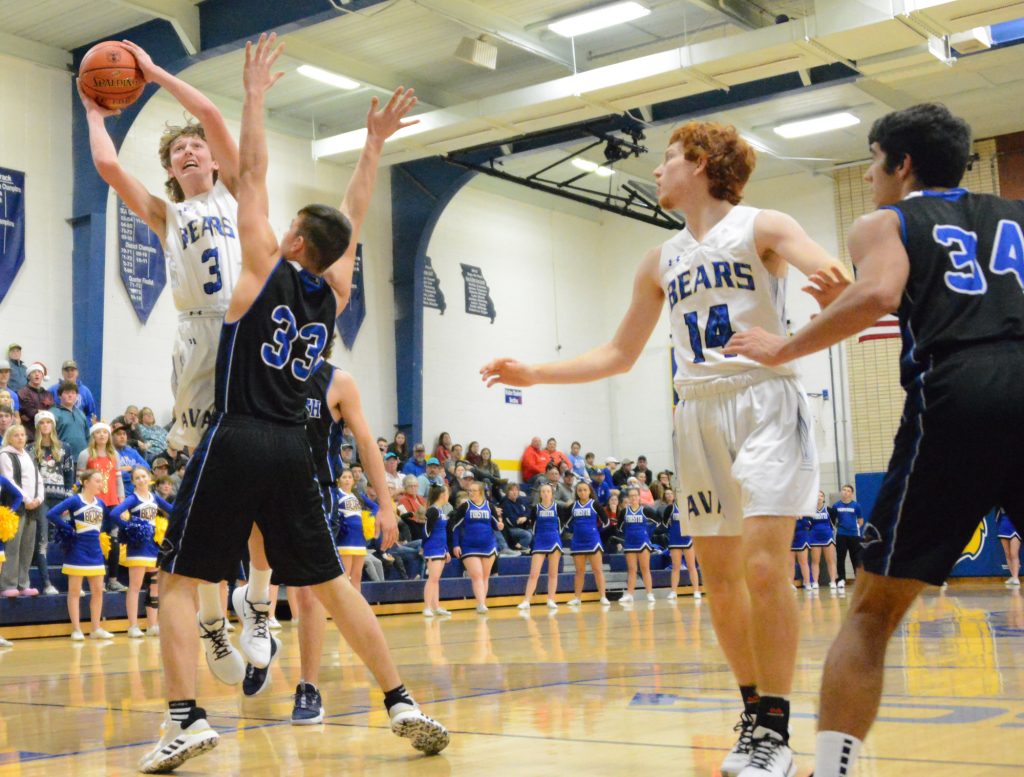 Ava High School senior Blake King (3) jumps up in an attempt to toss into the bucket from nine feet out during a game against Forsyth on Friday, December 20, 2019, in Ava, Missouri. (Jason Hoekema/Herald) 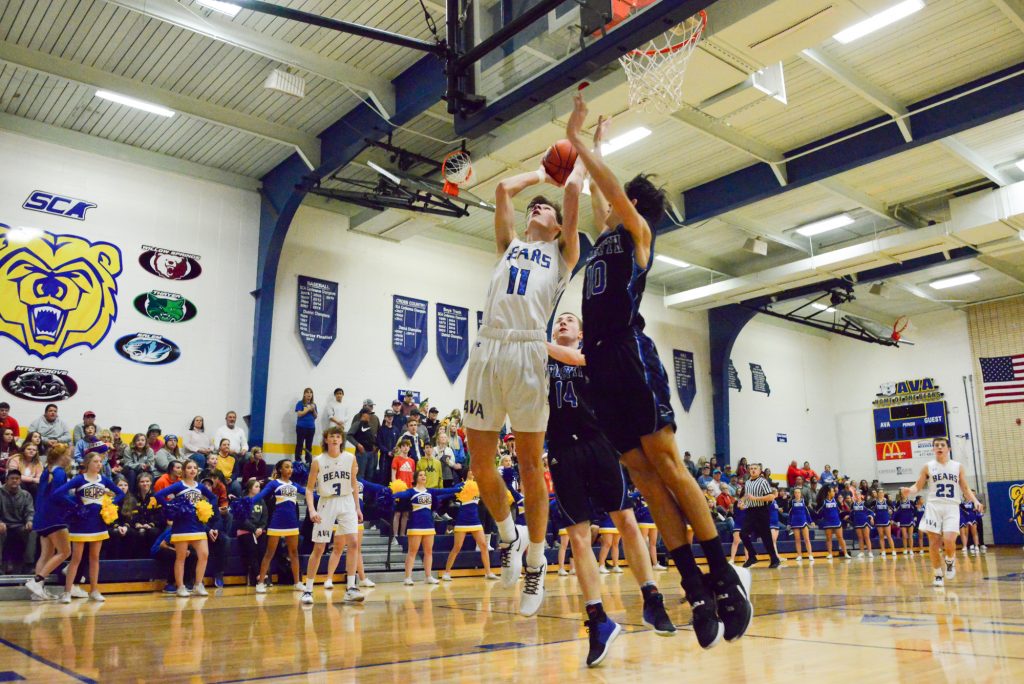