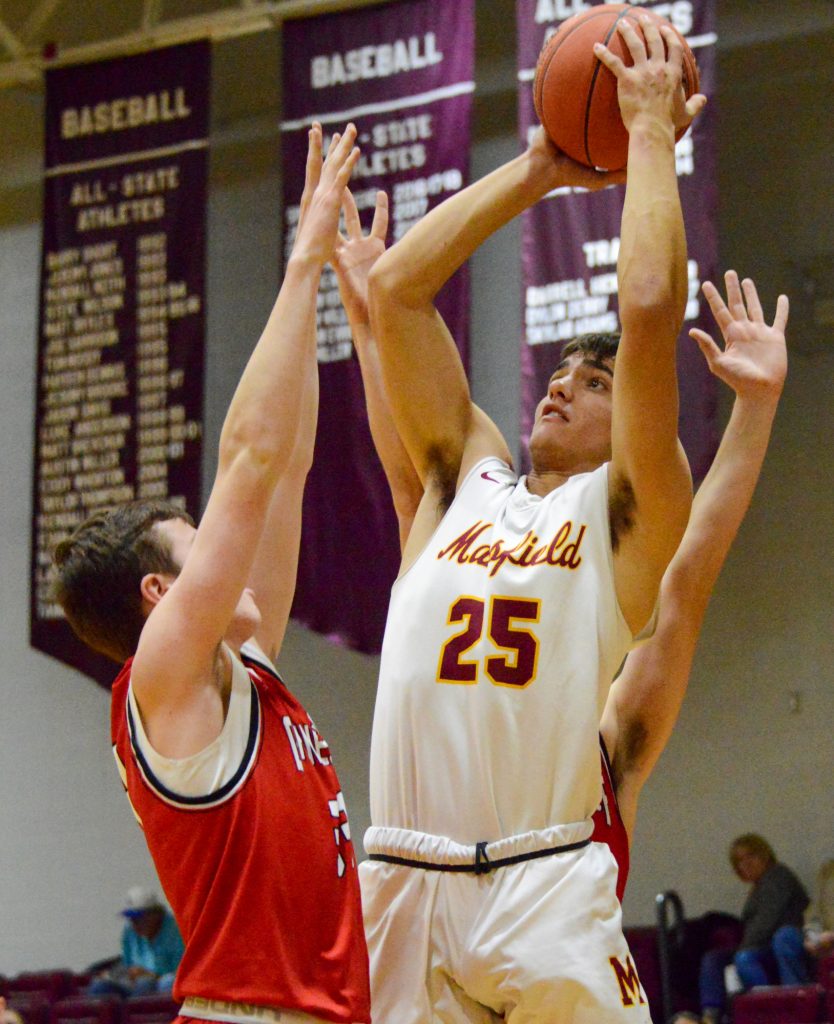 Mansfield High School senior Hesston Gray (23) takes a shot from outside during a game against Gainesville at the 83rd Annual Mansfield Invitational Tournament on Thursday, December 12, 2019, in Mansfield, Missouri. (Jason Hoekema/Herald)

Houston was a no-show in the first quarter against Willow Springs which created a deficit the Tigers could not afford. After four quarters the Bears had earned their spot at the championship game with a win over the Tigers.

On the consolation end of the bracket Gainesville topped Mansfield, 60-56, shutting out the Lions in their own tournament. Not all news from the rebuilding team is bad as Hesston Gray made his 1,000th career point with a free-throw made in the first quarter of Thursday’s game.

In the deep end of the pool Ava and Conway clashed to determine who took the bread and headed to the championship bracket with the other teams playing in the tournament. With Houston’s fall to Willow Springs the Champion crowned Saturday was going to be an SCA school and the Bears will be the winners (both Ava and Willow Springs are Bears).

As for overall records this placed Willow Springs on a 3-0 streak to begin their season. The Houston Tigers dropped to 4-3 while Gainesville improved to 3-2 over the now 0-4 Mansfield Lions.

In the pool Ava was toe-to-toe with Willow Springs with a matching record of 3-0. Norwood sits at 2-3 before Saturday’s games and Conway is in the 500’s with a season record of 3-3 as of Friday Morning.

Games over the weekend to determine placing in the 83rd Annual Mansfield Invitational Basketball Tournament left no one short on excitement as Gainesville and Norwood duked it out for the consolation prize. Gainesville ended up winning the game 72-70.

Gainesville had a run for seven in the first quarter where they remained ahead of the Norwood Pirates, 23-19. At the half the Bulldogs led by just four with the Pirates hot on their tail.

Jalen Evans led in scoring for Gainesville with 19 points from five buckets and two shots from outside. Evans shot just .375 from the line, which was the probable difference in the tight game.

Through four quarters the game knotted up eight times and the lead toss back-and-forth between the two teams.

Jaxon Britt scored 15 with six from inside and another three from the line while Bryce Hambelton was slaying the defense inside at the low post with bucket after bucket, eight points in the fourth quarter alone making nine through the entire contest.

Norwood relied heavily on ringer Garrett Davault who put up 40 points with ten twos and five threes plus a 1.000 from the line for five more shots.

Norwood had some difficulties inside minus Davault but turned to their sharpshooters to hit eight field goals from outside. Davault himself shot three from outside in the third.

The Gainesville defense had little answer for the player who was at the helm for the Pirates.

Final minutes of the game had spectators on edge as the Pirates trailed 70-67. They needed a big three to knot the game and it came from the hands of Jalen Drake, lighting up the gym with noise and excitement.

Unfortunately for the Pirates, their defense could not keep Landry Jenkins out of the paint where he sort-of stumbled, fumbled, and tossed the ball up with hope and a prayer.

The unlikely-to-succeed shot ended up, over, and in to give Gainesville the two points it needed to avoid overtime.

In the Houston-Conway game, excitement was again filling the gym with hard-fought basketball going on the court. The final, 55-53, score was just as nail-biting as the first game as Conway won for the tournament’s third place spot.

A high-fouling game saw Conway benching Chase Caffey in the fourth, but Houston had to sit two of their own in the fourth as well.

Conway was outscored through the first half, losing each quarter at 15-10 and 18-16. Then Coby Vavruska happened.

The player scored 19 points in the game, second only to Jake Vestal, but the difference was when and where each player ballooned.

Vestal was a defensive nightmare for the Tigers as he drew fouls and shot for nine points with a .750 from the line.

Vavruska stayed under the radar through three quarters, scoring just ten through the game. In the fourth quarter he came up big nine points and “broke” a pair of ankles on the way.

The Conway Bears tied things up with free points late in the fourth before Ty Franklin pulled the and-one for the late lead.

But having given up 21 total game fouls with the double bonus active, it was a two-shot foul drawn from Dakota Burchett that sunk the Tigers.

It was Vavruska’s only trip to the line in the entire game, but with 12 Tiger-foul points already on the board the final costly mistake led to Vavruska hitting both from the stripe as if there were no pressure.

In the end Houston’s Tyler Ramsey worked for 21 points with Franklin and Korbyn Tune each scoring ten apiece. The Tigers shot .714 from the line, but Conway did better with a .737 and more trips.

On the Conway bench Vestal led with 20 points followed by Vavruska with 19 and James Shockley with 11.

In the end it was an 18-6 first quarter which put Ava far ahead of Willow Springs. With Ava using the depth of their roster to but points up everywhere while Willow Springs suffered from full-court pressure and an Ava defense which stole and defensively rebounded their way to victory. For more on that game, please see, “Overload.”