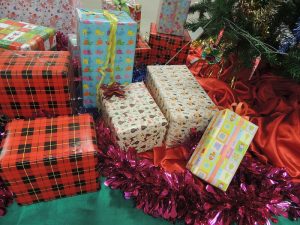 The average American will spend $920 on Christmas gifts this year reaching a total of more than $1 trillion in holiday spending. Eight percent said they would spend nothing, and three percent said they were unsure. Twenty-nine percent expected their gift spending to be between $100 and $499 according to stats from Investopedia.

In 2001, the average American planned to spend $1,052 – the highest ever.  Following the financial crash in 2008, planned holiday shopping dropped to $417 in 2009 – less than half of what people planned to spend in 2018 according to the National Retail Federation.

Americans have been spending more on holiday gifts every year since 2008 (except 2012); although the holiday spending is still not back on the prerecession trend, it seems to be headed in that direction – possibly thanks to lower unemployment, stronger growth, and higher confidence in the economy.

I can’t find a stat for the number of people who receive stuff on Christmas they really don’t want or need. Often these gifts are from people who can’t afford to buy Christmas gifts. The average American racked up $1,018 in credit card debt in 2018 according to a CNBC report. Most of these Americans spent the last year trying to pay off that debt. Why do people do such crazy stuff?

It’s good that we want to give. Giving makes us feel good, but it won’t make you feel good when you are still paying for it in July.

Think about ways to give that you can afford or that might be more meaningful.

How about make lunch or share your evening meal with someone? Offer babysitting for a night as a gift. Write a letter of recommendation for an unemployed friend. Write someone a note and let them know what they have meant to you over the years. Offer an hour or even an evening of your time to a friend or family member to chat over a snack. Relieve a relative who spends hours and days at the nursing home. Go and take their place for a day to help out. You might be thinking – “I’d rather just send or give them a gift.” Exactly, because time is our most precious gift and asset.

One of my best friends died not too long ago. He had a lot of money. He said, “Glenn, the only thing I want is just one more day.” As we face this life and look at all our stuff how much does it really mean to us in comparison to our time and relationships, love, friendship and the ability to enjoy life?

Keep in mind Christmas is about someone – Jesus. He gave us his time, his life, and what he did and became for all humanity continues to be the greatest gift.

Glenn Mollette may be reached at [email protected] Learn more at www.glennmollette.com   Like his facebook page at www.facebook.com/glennmollette