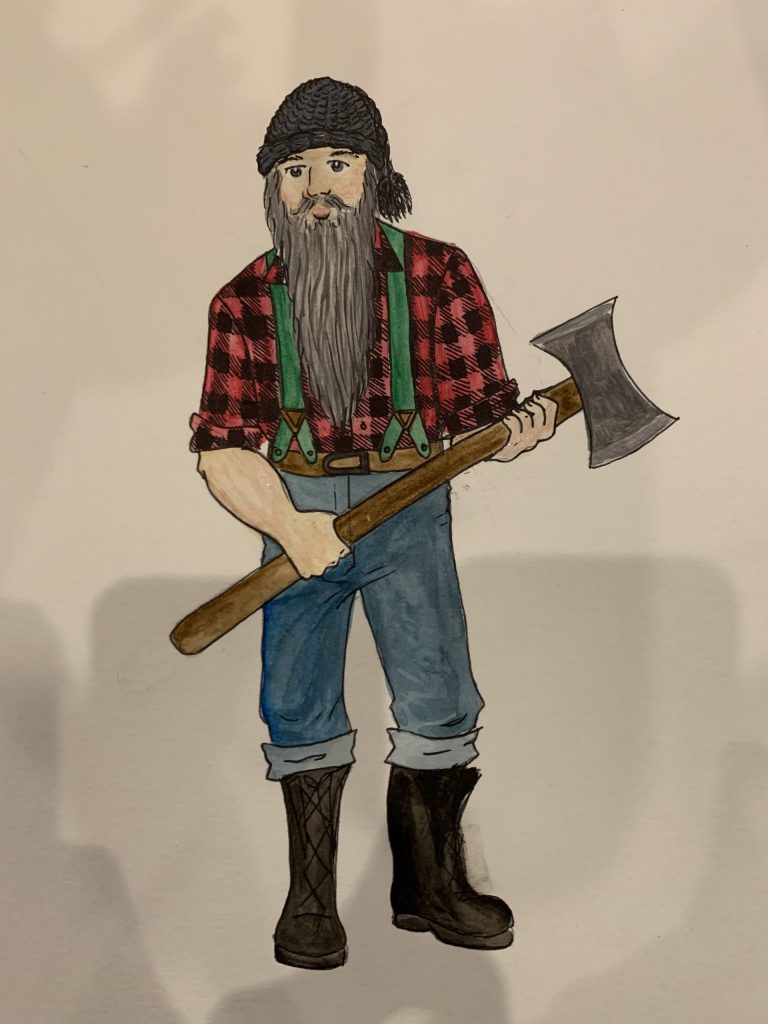 High in the north woods of the Yukon there lives a great lumberjack by the name of Jack Evergreen.  He lives alone in a log cabin that his great-grandfather built many years ago.  Smoke always pours out of the chimney as it is very cold where Jack lives.  Inside the cabin is only a bed, a table and a chair which sits near the hearth of his fireplace.  Jack spends many of his evenings reading, whittling or most importantly sharpening his trusty axe.  This axe is very special to Jack as it was passed down for many generations to him and now it is his turn to use it well.  Jack isn’t your ordinary lumberjack.  He is the fastest lumberjack in all the north woods and he proves it every Christmas season.

As fall turns to winter, Jack shoulders his axe and travels south through Canada and America.  Like a crosscut saw he walks north and south through the woods chopping down the perfect evergreens to be used as Christmas trees by all the families celebrating the birth of Christ.  It is Jack’s job to help the tree farmers fill their lots.  Year after year he amazes them with the tremendous amount of trees he can cut in such short amount of time.

One year on his journey home, Jack sat by a tree to rest and eat a meal of roasted chestnuts.  While eating, a moose walked up to Jack and appeared to be hungry.  Jack, being a sympathetic fellow, fed the great beast some of his chestnuts.  As Jack began to leave, the moose followed him along the way as he was mot grateful for the kindness Jack showed him.  Jack decided he enjoyed the company and took the moose for a companion and named him, what else, but Chestnut.  To this day Jack and Chestnut have been the best of friends.

Jack is a strong man with great skills and he is very aware that it is God that gave him these gifts.  As Jack travels home he always takes the time to stop in a church house to thank God for what He has given him.  Chestnut, being a respectful moose, kindly waits outside and worships under the stars.

Although Jack is rarely seen, folks who live in or near the woods know that it is Jack who provides most of the trees to the lots for the farmers.  As  a gift of gratitude these folks cook up a hearty meal for the traveling lumberjack and his moose companion.  Jack knows which house is offering the morsels by the lantern left lit outside the door.  It seems he never gets full because with all the walking after so much hard work Jack is always ready for another bowl of chili, soup or his favorite….stew!

Jack’s life has been filled with great achievements but there was a time when his skills were put to the test and his lumberjack days almost came to an end.  It was during the bitterly cold winter not too long ago when Jack was confronted by a tree farmer and a man in a suit.  The farmer told Jack that this man was from a company that could cut many more trees than him with their chainsaws, and it would be done in half the time.  Jack would no longer be needed but was thanked for his many years of hard work.  But good old Jack wouldn’t be put out by some big company.  He told the farmer that with his axe he would out work anyone who tries to best him.  The man in the suit brought in his best chainsaw worker and Jack took his axe and they both headed to the woods.  While the man spent time filling up his chainsaw with gasoline Jack went to swinging his axe.  But soon enough the man started to gain on Jack.  That’s when Jack remembered the great line of men he came from and the tradition he vowed to uphold.  While the man with the chainsaw began to sweat, Jack rolled up his sleeves and swung is axe so swiftly that he was chopping through three trees at once!  Before long Jack had made it through ten acres while the man was left far behind. The farmer saw what Jack accomplished and shouted “Ba Thundas!” then shook Jack’s hand and told him that there was no finer tree cutter in all the country.

After that, Jack did as he always does as Christmas day approaches and headed back to the Yukon with Chestnut at his side.  Along the way stopping to see which homes have left a lantern lit then sneaks off back into the woods on his journey home.

There was a time when I was in the deep woods one Christmas season when I thought I saw a man off in the distance with an axe upon his shoulder and what appeared to be a moose following shortly behind him.  It most likely wasn’t old Jack and Chestnut since moose haven’t been seen around here in many years.  But just in case, as Christmas gets closer, I just may fix a pot of stew and leave a lantern lit outside my door.