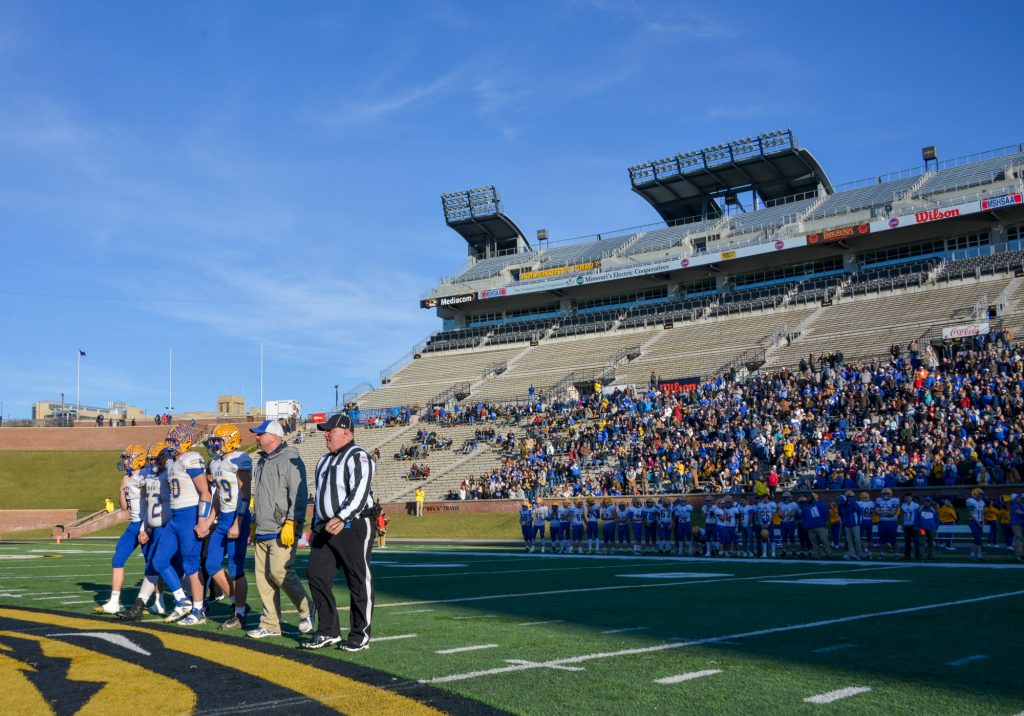 Coach Dan Swofford, second from right, and the Ava High School football team captains walk to centerfield for the coin toss prior to the start of the 2019 MSHSAA State Class 2 Show-Me Bowl on Friday, December 6, 2019, at Faurot Field in Columbia, Missouri. (Jason Hoekema/Herald)

COLUMBIA – Yes. It could have been an even better year if the Bears had put a ring on it. However, that isn’t the reality of the situation.

The reality is that the Missouri State High School Activities Association has a flawed playoff system. Schools which can recruit with no funding or districting restrictions have no business facing rural county schools who do not have such luxuries.

Let’s not dwell on that, though.

“When I was seventeen, it was a very good year,” are the opening lines to the cherished classic by Frank Sinatra. For the 2019 Ava Bear football team, the words couldn’t ring truer for the seniors.

The consensus of the Bears making the state finals was echoed by players through the postseason as “crazy,” “a dream come true,” “amazing,” and “emotional.”

After the Bears’ three-peat District Championship win, then their 24-16 win over Lamar followed by the intense mud puddle battle against Clark County in overtime, the 2019 Bears Football team was a first for the community. And the community came out and owned the MSHSAA Show-Me Bowl.

The crowd easily outnumbered Luthern’s fan base 3-1, if not more. Even in the face of a shutout loss against the Crusaders the high spirit never wavered. In the eyes of the people from Douglas County, the Bears were already state champions.

Before Friday came around the Bears started a journey into the unknown with a 38-36, overtime victory over Buffalo in Week 1. After that they squeaked by Hallsville, 28-26.

From that point on the Bears moved through the South Central Association Conference with wins over Mountain Grove, Liberty, Salem, Houston, Thayer, Willow Springs to win the SCA outright and undefeated for a second time.

From there they topped Willow Springs a second time, earning their only shutout of the season with a 36-0 goose egg delivered to the Maroon Bears. It was the third time in as many years that the Bears had taken the District Title home. Then came the challenges.

In four quarters the Bears came up victorious with a historic 24-16 win over the team which had sent them home twice in the last two years.

After that was the nail-biting performance against the Clark County Indians to earn the school their first-ever appearance at the state level in the 2019 MSHSAA State Class 2 Show-Me Bowl.

This year the Bears have moved the ball 5,549 yards across fields at home and away. Between Swofford, Myers, Bray, Skyles, Mendel and the entire offensive line moved the Bears over three miles against defenses which stood in the way.

This year the Bears averaged 8.24 yards per snap over 729 plays, earning 172 first downs, 126 of those rushing. The Bears amassed nearly six and one-half hours of possession time

Season highs include 22 first downs against East Newton, 683 yards against Lamar, and earning 303 points on opponent turnovers this season while allowing 111 on turnovers to opponents.

Against East Newton the Bears held on to the ball for over 34 minutes but it was the average of 23 yards on first against Salem which highlighted the power of the Bears’ first snap.

In the individual statistics realm, Myers led with 1718 rushing yards, averaging 6.22 yards per carry with a season-high 65-yard rush. Myers contributed to 26 touchdowns.

Nate Swofford picked up over 1,400 yards averaging 8.02 yards per carry with a season-high 75-yard rush for a touchdown, which he carried for 18 trips into the pay dirt.

In the receiving department Bray picked up an average of 9.76 yards per reception earning seven touchdowns. Three of those against Clark County where he caught the game-winning catch in overtime.

Myers averaged 8.91 yards per reception with one touchdown and was a problem for defenses when he got by and set up in the screen.

Spencer Skyles averaged 16.03 yards per reception this year and found the end zone seven times as a receiver. Zach Mendel averaged 14.25 yards per catch and picked up one touchdown this year.

Big numbers from a Big offense helped carry the Bears across the threshold of local history and delivered a season Douglas County will discuss for years to come. 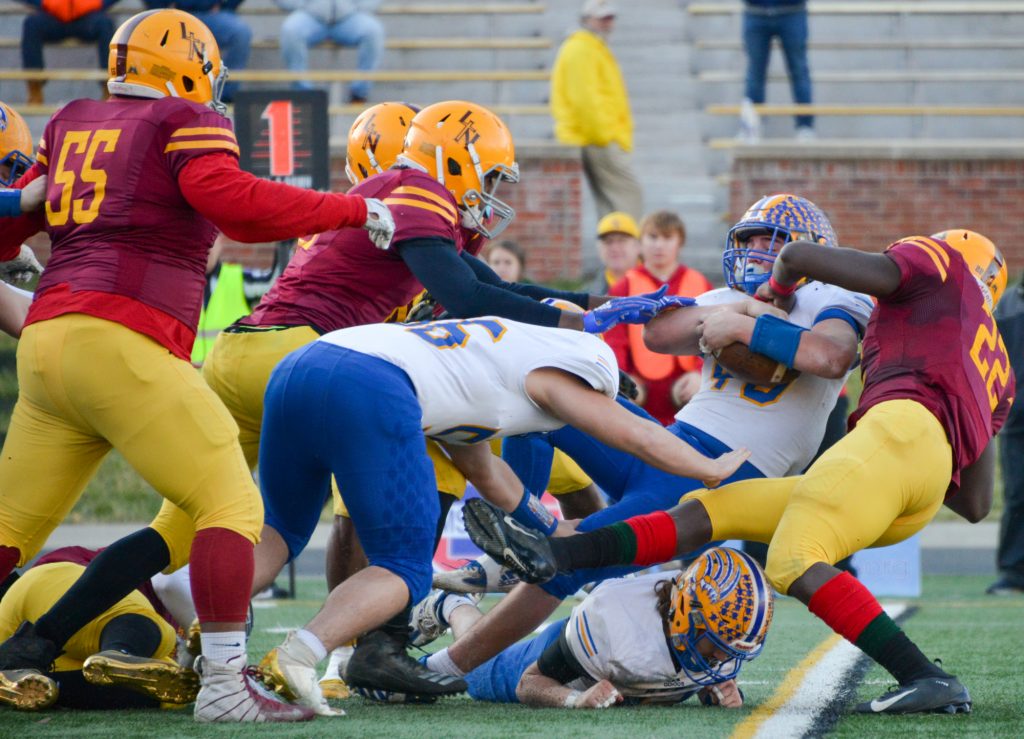 The Bears took the 49-0 loss in the final round of the postseason as they were out gunned by the talent on the Lutheran North roster. Even with the score differential as large as it was the Bears didn’t take the game lightly.

Crusader quarterback Brian Brown took some big hits including a sack for a loss Friday evening. In total the private school rushed for 207 yards and passed for another 171 for 378 total offensive yards.

The Bears had nowhere to go most plays and their longest drive lasted for nine snaps over 33 yards. In the end, Nate Swofford couldn’t get a break in the quarterback position and the taller corners easily deflected passes.

The highlight of the game was an interception at the Bears’ 21 by Swofford, who returned it to the Crusaders’ 43. Unfortunately, the drive died after 13 yards with a fumble on second down.

Kadyen Meyers has led the season with over 1,700 rushing yards adding 66 in the championship bout. Swofford was 0-for-2 in passes but was able to rush the pigskin across the turf for a total of 60 yards.

Penalties did cost the Bears some ground with 32 yards given to the Crusaders in the first half. In the end, even with 31 minutes of possession time, the Bears weren’t going to unlock the combination to this defense.

With three seniors verbally committed to college football teams and a trio of specialty kickers, one a dedicated kicker, Lutheran North just had all of the advantages a school could get. Friday, they claimed the state title.

The Bears still have a lot to look forward to as up-and-comers begin preparing for their own senior season.

Memories of this season will grow sweeter with time like a finely aged wine. As Sinatra sang it, “And it poured sweet and clear, it was a very good year.” 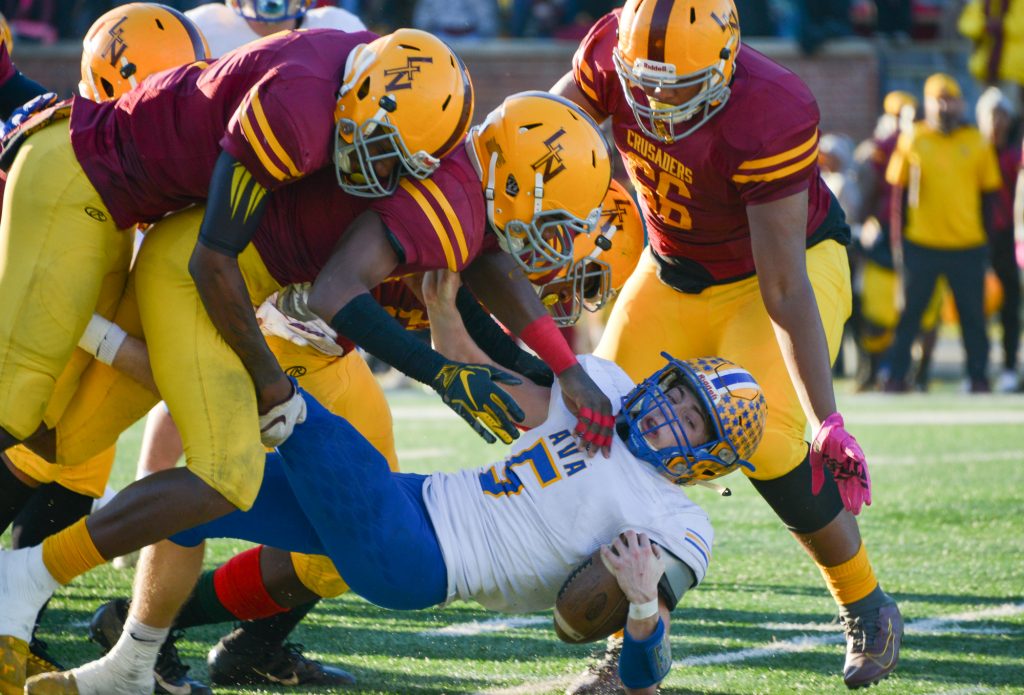