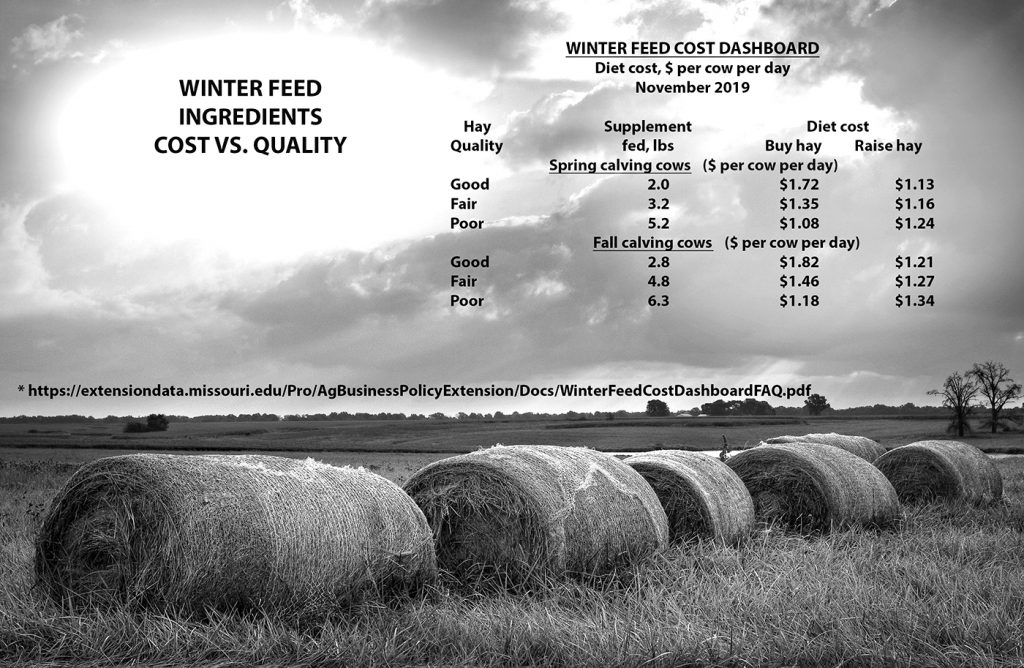 COLUMBIA, Mo. – Beef producers will soon spend a lot on hay and supplement. Just how much can vary and depends on many moving factors, say two University of Missouri Extension specialists.

“Winter feeding is a critical time for herd health and production. It’s also the most expensive time on the cow calendar,” Schmitz says.

Carpenter says grass hay prices dropped only slightly from last winter following a drought. Although USDA reports strong production in 2019, hay stocks at the start of harvest season were the lowest in 35 years. Heading into the winter feeding season, prices remain 25-30% higher than two years ago.

They considered multiple feed mixes to meet the cow’s nutritional needs. They estimated cost at about 8 cents per pound for delivered feed in central Missouri.

The cost of raised hay is set to $62 per ton, based on MU Extension production budgets. Carpenter says producers who grow their own hay should strive for high quality. The costs per ton to grow poor-quality and high-quality hay are the essentially the same.

The realized cost of feeding good-quality raised hay is about 59 cents less than comparable purchased hay. Feeding poor-quality raised hay actually cost the producer about 16 cents more each day than buying comparable hay. This difference is even higher in years of surplus hay supplies, says Carpenter.

Using current market prices, producers who buy hay save about 64 cents per cow per day by feeding the low-priced, low-quality hay even though it requires a higher level of supplementation.

Carpenter says he knows the “cheap hay” calculation flies in the face of traditional cattle and forage wisdom. “But that is how the math works,” he says. “The idea is not to feed junk, but to keep hay costs low even if it means spending more on supplement.”

For more information, go to extensiondata.missouri.edu/Pro/AgBusinessPolicyExtension/Docs/WinterFeedCostDashboardFAQ.pdf.