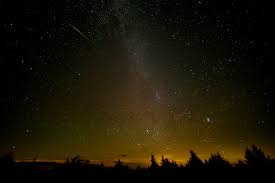 The Geminid meteor shower is known for putting on quite an entertaining  nighttime show.  In past years, the event has frequently spawned a multitude of brilliant, easy-to-see shooting stars.

The meteor shower is reported to be approximately 200 years old as the first sighting was recorded in 1833.  The viewing was made from a riverboat on the Mississippi River.

This year the shower is scheduled to peak during the nighttime hours of Dec. 13-14, according to NASA. However, even after that two-day window passes, meteors may still be visible for several nights thereafter.

According to experts, the Geminid shower is considered one of the better meteor shows for viewing, with the best time to watch around 2 a.m. local time.  But on occasion, meteors have been seen as early as 9:00 or 10:00 p.m.

Meteors can appear anywhere in the sky, so being fully reclined, where the night sky is in full view, works best.  Sightings are also better out in the country, away from bright lights.

For those who plan to watch the show, experts recommend preparing your eyes first by allowing them to adjust to the darkness for 20-30 minutes. After settling in with warm blankets, and upon Mother Nature cooperating with a clear night sky, one is likely to see a spectacular shooting star show.