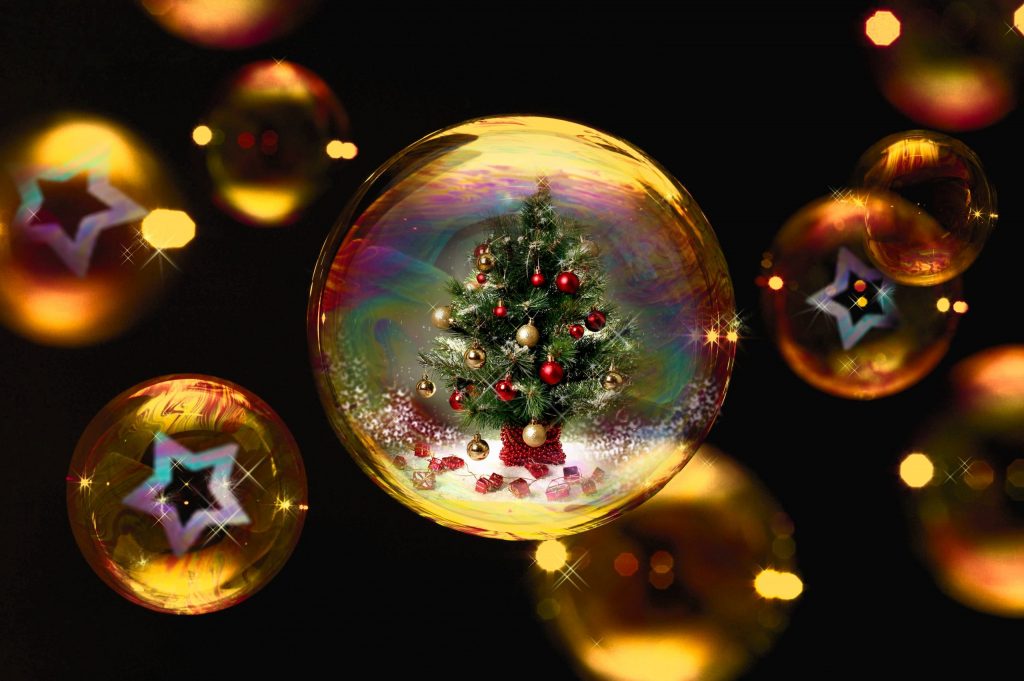 In the movies, it’s often something odd.

A jelly of the month subscription. A Mogwai. A carton of cigarettes.

Hollywood merchandising opportunities aside, what do Ava people think of as their most memorable Christmas present?

For Jo Anne Hereford at the Ava Art Gallery, it was a computerized quilting machine. “I love planning a quilt,” she said. “But not so much the quilting part. The machine makes that easier.”

For another Art Gallery shopper named Nancy, it wasn’t even a second thought. “A pink and white Schwinn girl’s bike,” she said. “I’d see it when we went shopping at the BFGoodrich store and my parents would say ‘don’t get your hopes up – it cost more than we could afford.’ Then one week it was gone and I was sure I’d never see it again – but on Christmas morning it was waiting for me by the tree.”

Helen Miller, owner of Memory Lane Antiques in Ava, finds having all her family home for Christmas Eve is present enough. “There’s 38 of us now, so I always order pizza,” she laughs. “Then some of the younger ones bring a dessert.”

Also at the antique store was Jean Kelly, who grew up in a family with six children. She remembers eating ham and orange salad made with jell-o. Watching her grandchildren brings her Christmas joy these days.

“Ropers. Which were cowboy boots but we called them Ropers,” says Faunlee Smith at the Douglas County Abstract and Title Company. “In junior high school they were the in thing. I also liked getting a second wedding ring from my husband.”

At the Tarrant Insurance Agency, Dan Ricciardelli also recalled a bike. “It wasn’t just red,” he said. “It was fire engine red. A Schwinn. And it had a horn. One speed. The guy across the street got a three-speed, but I was happy with the one speed.”

For Marsha Roberts at the offices of Attorney John Bruffett, it wasn’t a gift you could buy in stores. “My second granddaughter – Allyson – was born on December 21st,” she said.

For County Clerk Karry Davis it was an engagement ring.

Sarah Lunn of the Douglas County Collector’s office also grew up in a family with six children and not much for budget. Her favorite Christmas present was a small doll given to her by one of her sisters.

“Roller skates,” said Christy Overcast of the Douglas County Prosecutor’s office in the courthouse. “We had a basement and the stairs were in the middle, so we could race around and around.”

“A blue bike with a banana seat,” said Jacinda Sheppard at the Douglas County Recorder’s Office. “It had a basket, streamers from the handlebars, and even a little horn.” But all wasn’t well that Christmas morning. “I was upset it wasn’t just like my brother’s,” she laughed.

For Alicia Degase, Douglas County Assessor, it wasn’t just the gift but the presentation.  “My dad turned off all the power to the house without warning us,” she said. “He told us that Santa hit the house so hard he knocked the power out. Then when all the lights came back on, there was a new bike by the tree.” Degase also recalled “miscellaneous boxes” from a grandmother, filled with notepads, emery boards, and other odds and ends.

Sherri Doane of Action Realty was nine or ten years old when she and her sister got dirt bikes for Christmas. “I was so excited that I wanted to call my boyfriend, but it was like six in the morning yet so I couldn’t,” she said. “We rode the  dirt bikes around our farm. I rode mine barefoot in summer and ended up breaking a toe.”

John Sutton of Action Realty still has his favorite Christmas present. “It’s a little piggy bank, shaped like a fire hydrant, with a $0.10 sticker on the bottom,” he said. “I got it when I was twelve years old, living in foster care, and it was the first present I ever got.”

“A custom cross-stich table made by my husband,” said Brenda Hempel of Options Pregnacy Center. “I use it all the time.”

Paige Laub of Options remembers getting a small piano at three years old. “It made me a very happy little girl,” she said.

At the Simply Kids and Baby store in Ava, Robin Reinartz remembers getting a plane ticket to visit her brother in Nevada.

Robert Hennes of the Ava VFW considers the December 30th birth of his daughter his most favorite Christmas present.

At Blondie’s Boutique in Ava, Manager Lindsey Dunston remembers her first pair of diamond earrings, a Christmas gift from her father when she was 16.

Store owner Jerrie Mason recalled getting a Shirley Temple doll. “I loved her as a person, “ she laughed. “But I hated that doll. I pulled all of it’s hair out.” Mason also recalled her mother selling a large console stereo in order to buy her a smaller turntable with a radio.

“I begged for like two years,” said Hannah Tate at Jean’s Healthway.  “And my parents finally got me a Dalmatian puppy.”

“An electronic kitchen scale,” said Margaret McFarlin at Brook Care, “I use it all the time for cooking.”

At Workhorse Western Wear, Roma Bovard considers her children’s engagement as her most favorite Christmas present.

At the Cattle Baron’s Boutique, Annie Blakey laughed and said “A waffle iron. I got it as a kid, during my tween years and I was so excited. It became a tradition to make waffles for Christmas. It was even re-gifted once. It had broken, my husband got it fixed and gave it to me again.”

“A .410 shot gun,” said Chris Crews, at Ava’s Court Probationary Services. “I got it in the 3rd grade and still have it.”

And – if you are the first to email [email protected] the names of the four Christmas movies that contained the gifts mentioned at the beginning of this article, there will be present waiting for you the Herald offices.