On Tuesday, December 10th, the Ava Board of Aldermen convened for a business session at 5 p.m.

City Treasurer Peggy Porter reported that as of November, the city’s accounts were at $2,300,000. That’s down a bit from where she wanted them, but Porter said after December taxes came in the accounts would be fine again. Porter said the results from the recent audit aren’t ready yet, but will be by the next Council meeting in January.

Alderman Stan Lovan gave an update on the Douglas County Sheltered Workshop (DOCO). He reported that the facilities were vastly improved since his last visit. Lovan was impressed by the various jobs the facility handles, from reclaiming aluminum and cardboard to assembling Easter Eggs with prizes in them, to heat treating wooden palettes. He said the facility has 39 employees and is very safety minded.

Mayor Loftin reported that the Ava Wastewater Treatment plant recently lost all of its bacteria (that breaks down the waste). The city contacted the DNR for help, but the two organizations were unable to determine exactly what happened. Ava was able to get two truckloads of bacteria from Mansfield at no cost to reset the system.

Mayor Loftin and Peggy Porter discussed an upgrade to Ava’s water and electric meter system that they wanted to get into next year’s budget. The system would allow the meters to be read remotely, allow services to be turned off and on via computer, track outages online, and more. The project would cost approximately $75 – $80K. The council voted 4-0 to continue investigating the system.

The council voted to approve the Mayor’s purchase of a 2016 3/4 ton GMC truck for use by the water and sewer department at a cost of $25,000. Loftin said they were able to sell the old truck and recoup some of those costs.

Loftin reported that for the upcoming holidays, trash pickup will run double routes on the Thursdays after the holidays.

Loftin noted that filing for two council seats (one east and one west) will run December 17th through January 21st. Councilmen Keith Jones and Stan Lovan will be completing their current terms.

Loftin reported that the city is in the process of consolidating four different phone bills into one. He also reported that the phone system at City Hall would need to be replaced soon. The current system is a Toshiba brand and it’s being dropped by the manufacturer.

Mayor Loftin announced that the city had received preliminary plans for the upcoming work on the Ava Square. He expected to seek bids mid-spring of 2020, with the work getting underway next summer.

The Council agreed to cancel the next regular meeting as it would occur on Christmas Eve. The next scheduled meeting is January 14th, 2020 at 5 p.m. at City Hall. Meetings are open to the public. 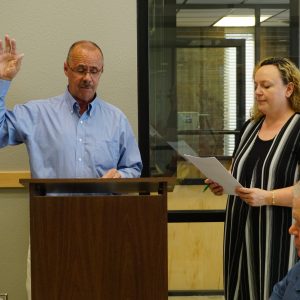