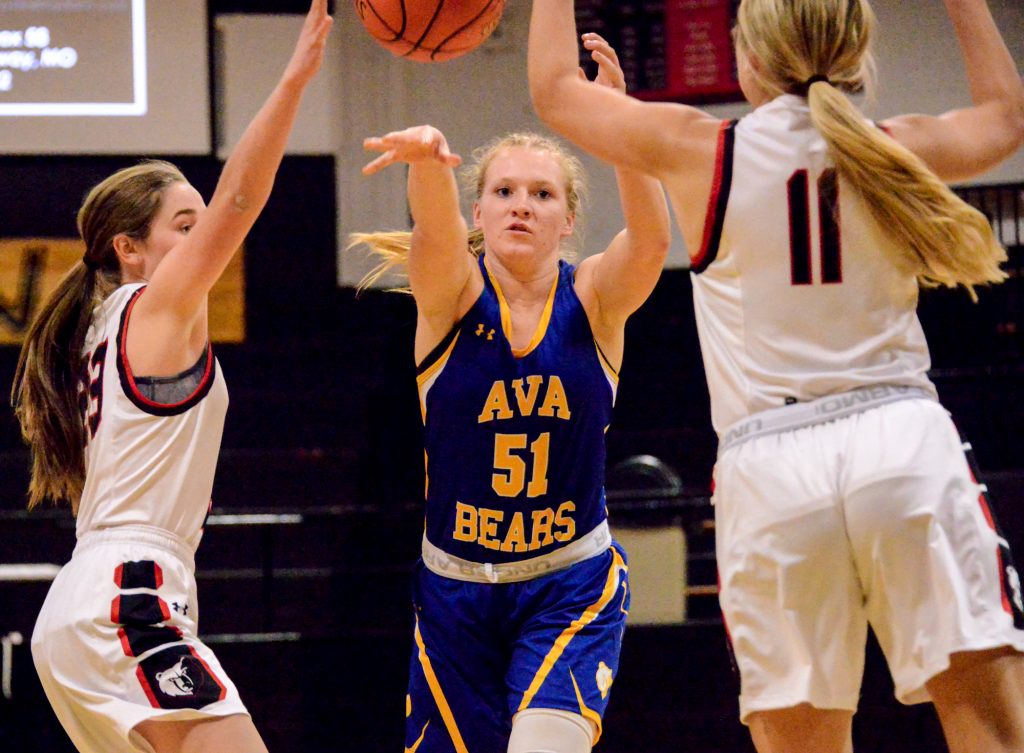 The tip-off followed the junior varsity’s 58-24 victory when Hannah Evans got one up in the lane to open the board for Ava.

Conways lack of rebounds and some of Ava’s height (in comparison) meant more touches and breaks on the offense. Moving the offense around and getting someone into the post was also a big point-maker for the Lady Bears.

“I felt like we were ready,” said coach Nathan Houk. “They were going to press us and we felt confident that we were going to get some good buckets on the other end. Second game, (they) played better.  They really played better in transition, looking at the floor to the open man and scoring the basketball.”

Returning sophomore Hannah Evans came up big in the first with seven points and an assist to Claire Fossett who put up six of her own points before the first was up.

Freshman Olivia Gastineau scored back-to-back twos late in the first quarter when the Lady Bears pulled away with a comfortable 10-point run to 22 points before they closed the first 25-13 over the opposing Lady Bears.

Teamwork brought the pressure into the paint against Conway, who did not seem to have much of an answer for Fossett and Evans right out of the bag. Evans made a statement shot with three points to close the first.

Assists were abundant, as were steals and the rebounds the Lady Bears missed out on against Hollister last week. Coach Nathan Houk talked last week about having patience on offense by moving the ball around the perimeter.

The passing between Little, Olivia Gastineau, and Emaly Keyes helped get Claire Fossett and Evans into the post for the bucket.

The second became a pre-break lull for the Lady Bears, who were only able to put up 12 with Conway adding up to nine and closing the gap a bit, 37-22, at the half.

The Conway defense turned their attention toward Evans and Fosset, who both scored fewer points than they had in the first. Between the two, only five points were put on the board.

This is where returning sophomore Baylan Alexander came into play with two plus a trademark long-ball from Keyes to keep Ava ahead.

“They stopped pressing us in the second quarter,” said Houk. “So, we didn’t get as many layups in transition for buckets on the other end. Then (we) just didn’t do well for a couple minutes. Then Emaly Keyes hit a three and I think Hannah hit one and we kind of got going a little bit.”

Fouls were no trouble for the Lady Bears, just five called against Ava in the first half. On the other end of the maple Conway offered up four personal fouls, two against Fossett which weren’t on the floor. She shot 66-percent from the stripe before the break.

In the second half the Lady Bears put in the work for another 37 points. 17 made in the third period while some of the younger players came in for the experience and helped top Conway with 20 points in the fourth.

On top of making more transition buckets and winning the rebound in the paint, the Lady Bears displayed an increased amount of court awareness.

Longer passes and players hitting their spot with time to spare led to a few long, cross-court passes which helped players like Claire Fossett, Olivia Gastineau, and Evans deal some damage on the court.

All 17 in the third were made by the trio, Fossett leading with eight.

“We did a good job of penetrating and bumping it off to the open man,” said Houk. “Then those players scored, which is always good.

Olivia Gastineau is a highly athletic player, a trait she has already proven on the softball diamond. Now she is transitioning that skill into the new sport, putting up 13 of Monday’s total points. She made one three in the third and was part of the transitional hustle before passing the ball off to another player around the perimeter.

As aggressive as the young player can be, she managed to give up just one personal foul, while drawing one to even things out.

“She is a good guard for us,” said Houk. “She scored in the fourth and then she also dumped it off to the open man and found the open player. When it wasn’t there, she was able to get to a hole and put it back in the basket.”

In the second half the Lady Bears had a few more fouls called, but Conway only made good on 57-percent from the line resulting in just eight points.

Runs in the Family

An interesting take on small town athletics is watching brothers and sisters dish it out together on the court. Newcomer Celia Fossett, Claire’s younger sister, made an appearance for four points as players swapped out to give the youth some real varsity court time.

Claire had herself a big night with 26 points, many were contested shots she was able to chip-in from beneath the steel.

“I’ve got a lot of sisters on the team,” said Houk. “The Keyes, the Fossetts and the Gastineau’s making up half of the team. They listen well and are easy to coach. It’s really been a blessing.”

The Ava Lady Bears picked up more points thanks to boxing out and picking up the rebounds from long-ball shooters Graceon Cromer and Cassie Vestal. Even with shots from within the lane, the Lady Bears defense was there to pick up the ball.

Even then, Cromer made nearly half of her team’s points, putting 20 of the 46 on the board herself. Second to her was Vestal with 14.

In the first half the two showed a little flair in their play. Cromer was able to hit the net twice from the arc in the first before Ava put some pressure on her in the second quarter.

Conway had another shooter hiding in plain sight with Vestal, who put up three twos and hit the net twice from the wings.

Once Ava had a bead on those two, players like Sara Mendel and Baylan Alexander were able to disrupt passes or pick up the benefit of a jump ball call while Evans worked the paint on both ends of the court.

“Hannah had a big fourth on the boards,” said Houk. “I felt like she had 20 rebounds. When they did penetrate, she was able to step over and help and got a lot of deflections there and a couple of good blocks.”

In the first half Little even picked up a nice steal for two in the second with 3:32 on the clock.

Claire Fossett led in scoring with a game-total of 26 points. She shot 66-percent from the stripe, improving from 50-percent against Hollister. She also did not try to keep the ball in scoring situations. Instead the senior picked up assists to Gastineau and Evans.

Evans was second in total points, putting 16 up and shooting 75-percent from the line against Conway.

With few opportunities to shoot and make better averages, the Lady Bears only picked up five points on charity, shooting a combined .625 at the line.

Even though it is very early in the season, the win against Conway improves the Lady Bears to 1-1, with `07 total points this season. So far, they have only allowed 14 points on 27 fouls.

Claire Fossett leads in overall scoring with 33 points followed by Evans and Olivia Gastineau who have 26 and 21 points, respectively. This season the Lady Bears are shooting an overall 56-percent from the line.