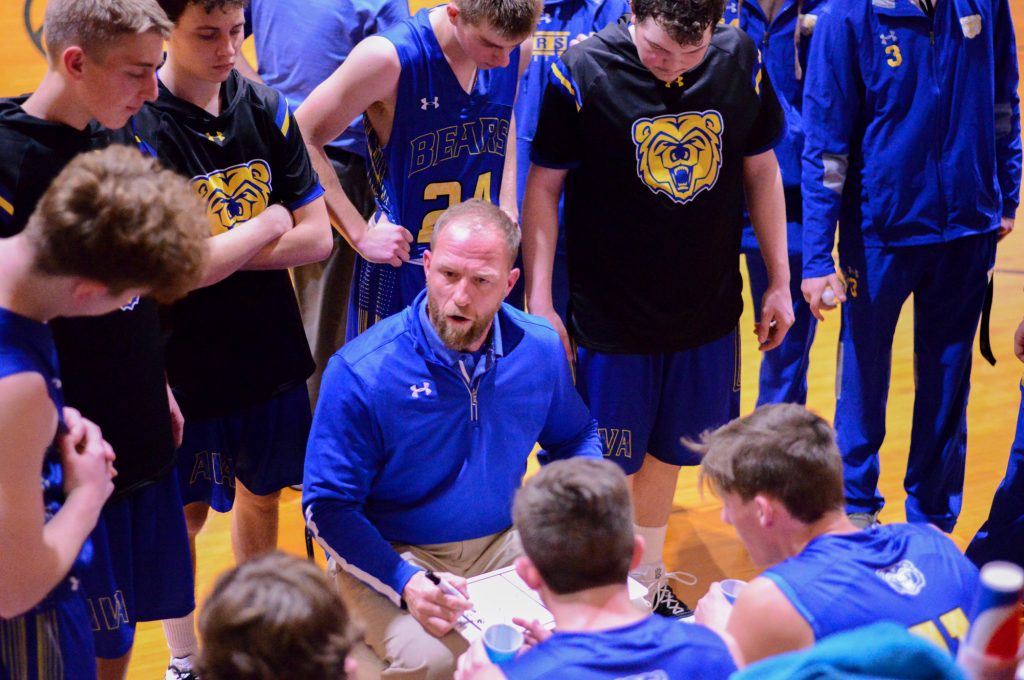 GAINESVILLE – At the half the Ava High School boys basketball team were walking to the locker room with a bit of disappointment at the six-point lead the Bulldogs had.

As football coach Dan Swofford put it earlier this year, the kids have no quit. Instead of taking the loss the team rebounded with an eight-point run to beat Gainesville, 52-51.

Few Short of a Bushel

Coach Seiger put it eloquently. The team had practically every excuse they could use to explain a loss. With the football team’s success several prominent players had to sit instead of participating in Tuesday’s game in Ozark County.

Some of the missing included Nate Swofford, Zach Mendel, Dylan King, and Blake King. With a state championship game to contend with the four have been focused on the task at-hand.

This has put Ava first-year coach Damon Seiger in a bit of a bind. Not only does he not have an entire team, he hasn’t practiced one either.

“I never had the opportunity to work with these guys over the summer,” said coach Damon Seiger. “So, when I say I’ve never seen my full team, I’ve still never seen my full team as far as what it could possibly be, not even for one day of practice. There is going to have to be a lot done in a short period of time. In the same (we) kind of scale it back to make sure that we’re  not giving them too much in a short period of time, but all the same give them enough. We’re hopeful that we can be competitive night in and night out.”

It comes at a time when the program is evolving into a new playbook and ways of getting things done on the court. It requires maximum participation to build the cohesive unit under a new direction.

The team could have opted to use it as a reason for a loss, but in the final minutes the offense and junior Quinton Donley came up big for Ava.

“I just had a conversation with my guys. I don’t care if they’re SCA, I don’t care if they’re Summit Conference. You go on the road, it’s usually a hostile environment. This place didn’t hold that many people, but it’s as loud as any 3000-seat arena or gym that I’ve been in. A testament to Gainesville to come out and gosh, they kind of punched us in the mouth early and kind of left us scattered and then kind of wondering what to do. But, you know, that being said we had three guys out there tonight with any type of varsity experience, and the rest of those guys were JV last year. For those guys to step in and fill-in the roles in which they did, I commend them. We will grow and they will grow individually (with) that.”

With less than a minute to spare in regulation the Ava offense had to make something big happen in the closing moments of the season-opener. What they needed desperately was a long ball that would hit the net for the go-ahead point.

In the first half of play it appeared that the remaining members of the varsity squad weren’t going to overcome the shortage in manpower. The team remained behind on the board consistently by three or four possessions.

The Bears only put up nine in the first quarter, a highly uncharacteristic occurrence given last season’s success. Andrew Dalton was covered and only put up two on a drawn foul. Meanwhile Blayne Mendel was leading with a pair of twos with an and-one.

Jacob Gillies managed to chip in two, but the offense wasn’t in control of the game. They held the Bulldogs to 16 points, but weren’t leading, either.

On the other end of the court Bryce Hambelton was an apparent issue in the low post. The six-foot-three-inch sophomore was responsible for 19 of the team’s 51 points as the leading scorer.

In the first quarter he was kept at just four, but he became a thorn with eight in the second and another seven in the second half. However, he only shot .250 from the free-throw line, which in-turn worked for the Bears.

Playing in the forward and guard positions were Jaxon Britt and Landry Jenkins with 12 and seven points, respectively.

Britt drew a two-shot foul from Donley in the first and another two off of Kaden Bruce in the second making four of the five shots.

In the timeout break called by Coach Seiger with 3:15 left in the first, his voice was overheard telling his players that they may have lost the first but wouldn’t lose another quarter after that.

The team rallied for 15 points in the second, but it wasn’t enough to overcome the eight-point run the Bulldogs had in the first, keeping the Bears behind 30-24 at the break.

Out of the locker room the Bears had tweaked a few things and kept pace with Gainesville behind one with an 11-10 third quarter.

Not much came from Britt and Jenkins – each limited to single two-pointers – but Hambelton was the question to which Ava didn’t have an answer. He went on to make seven of the team’s 11 points, but the tone on the Bears’ offense was changing.

“We made some adjustments on their big guy, but he still seemed to dominate us for really three, four quarters,” said Seiger. “We just did not have an answer for his size. He’s blessed with (it). Once he gets his position, he is hard to get around. There are just some things on night one, you realize that we (have) to clean these things up. That is really where we are tonight. It was important for guys to play the night to get some film on them and just actually see exactly where we were and what we need to continue to work on. As you found out, there’s still plenty there to work on. In the same, there were a lot of bright spots, too.”

This helped limit free points to Gainesville where Britt and Jenkins were shooting 1.000 and .800, respectively. That out of the way, the Bears went on to have a big fourth with 18 points.

Jacob Gillies put up 12 on Tuesday, scoring six in the first half but his other six were in the fourth quarter alone – one off an offensive rebound.

Junior Payton Evans had put in two with a wide-open lane in the third and Donley was devastating from outside.

Now a junior, Donley was able to set and shoot four three-point bombs through four quarters. Three of those were made in the second half alone.

It was his fourth and final shot which rocked the house in Gainesville. With approximately 20 seconds left he saw an opportunity on the right wing and hit the net for the go-ahead point which led the Bears to their first season win.

Last year Andrew Dalton was the front-runner of the team. He still led in scoring with 14 points but plays less of a go-to tempo and is part of an overall team offense. In the first quarter he picked up two with a foul drawn from Hambelton in the paint then went-on for six points – one bucket on the offensive rebound – before the break.

Last year, plays appeared to circle around the successful freshman with his jersey number being shouted from the bench, and often. The cat is out of the bag in this case and Gainesville’s coach Morris Jenkins made a point to his team about who Ava’s “best” player was.

However, with an assist to Jacob Gillies in the fourth, Dalton isn’t the only player opponents will have to worry about when Bruce, Mendel and Evans are also getting touches and making the shot. The team-centered combination helped push Ava through the game and into an eight-point run in the fourth to take home the win.

“You know, I feel a lot better right now based on the outcome of (tonight),” said Coach Seiger. “Nonetheless, win, lose or draw – I’m excited to be the coach of these young men. You know, they’ve come in and given (myself) and Coach Armstrong every bit of respect. They have done everything we’ve asked them to do. I think they’ll continue to do that and collectively, I think we’ll see some good things in the future.” 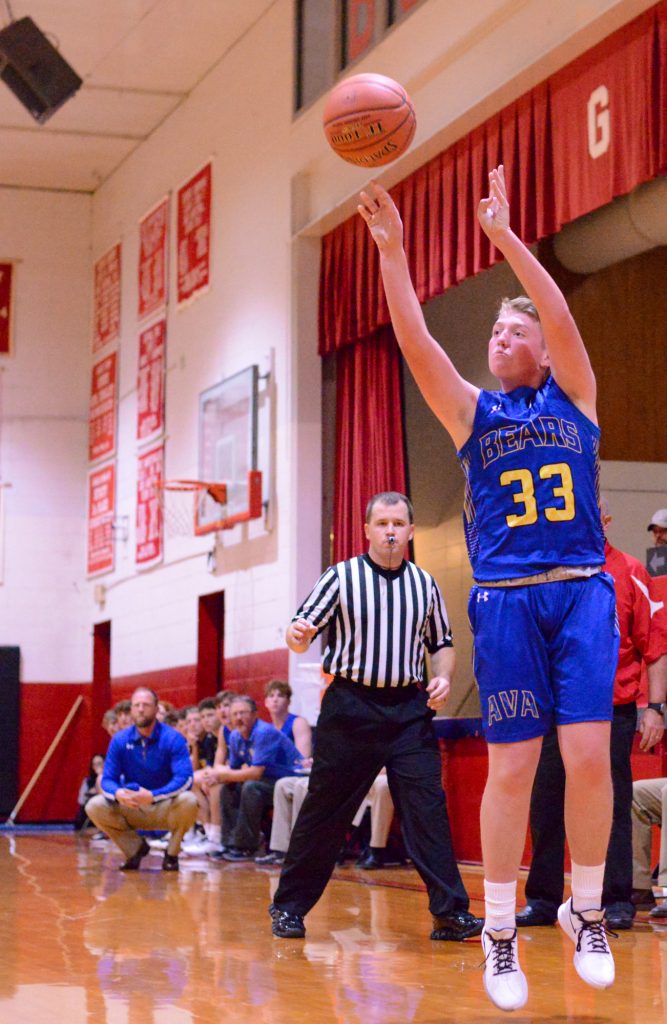 Ava High School junior Quinton Donley (33) shoots from outside the arc during a non-conference, non-district game against Gainesville on Tuesday, December 3, 2019, in Gainesville, Missouri. Donley had the final three-point shot to bump Ava over Gainesville, 52-51. (Jason Hoekema/Herald)