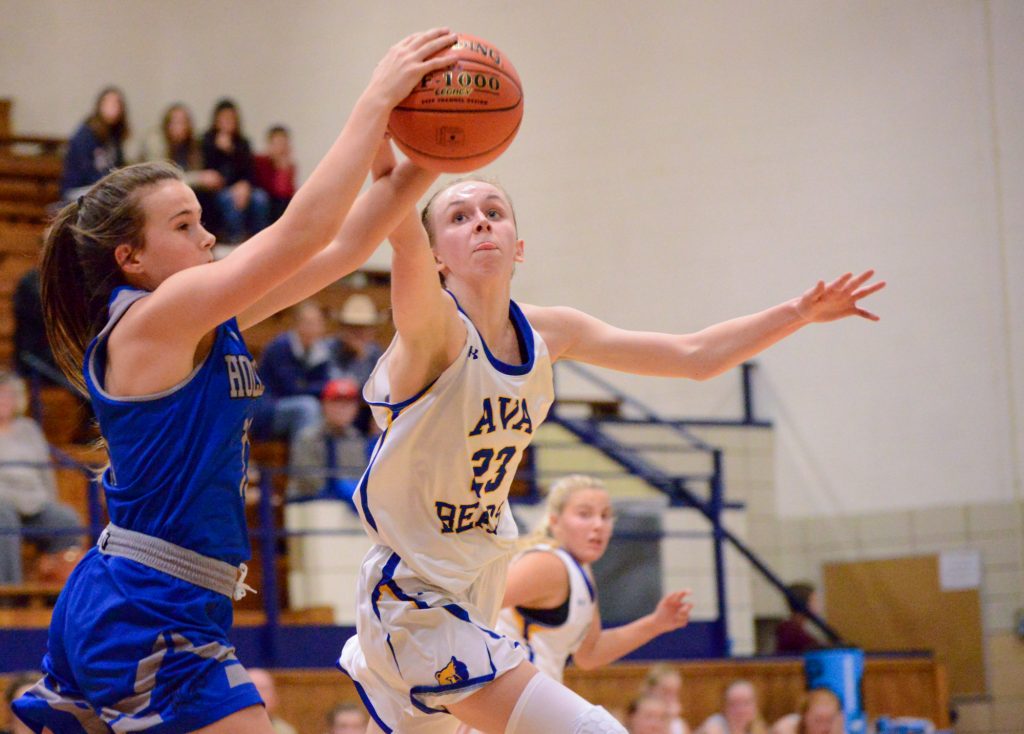 Apparent in the 42-33 home loss to Hollister last week was the lack of height in the post; a spot left vacant with the graduation of Lauren Mendel.

Trying some old tricks by passing high and into the paint, the Lady Tigers were able to nab the ball and take it back to the other hoop for the points.

The start of the game was stagnant with neither team putting anything but fouls on the board. Ava’s first shot of the season was an attempted three from Keyes which bounced off the steel.

The first blood drawn was on another three-point shot, but this one was made by Hollister’s Mady Pyatt from the wing.

The Lady Bears were wrangled in the first quarter, 10-5, with just one bucket by Claire Fossett. Evans managed to add three after drawing fouls on contested shots inside the lane.

In addition to the low number of points were the number of rebounds, both offensive and defensive. In the paint shots that missed were coming down into a cluster of blue jerseys as Ava struggled to get in for a chance to grab the ball.

“They were bigger than us and stronger than us,” said coach Nathan Houk. “We knew we had to come in and hold our box-outs and out hustle them to the ball. We didn’t win some of those battles with the ball coming over the top.”

Hollister remained consistent in the first half, putting up 10 points each quarter and not giving up the bonus until late in the second.

Problem players for Ava included Kendrick Bailey – who was nearly perfect from the stripe – and Jakie Pyatt with a game total of 13 points, matching Bailey.

When the two connected they were dangerous as the Lady Bears discovered when Pyatt went deep to the opposite arc and waited for a cross-court pass for two in the second quarter. The scheme worked again in the fourth with Gabby Franciskovich picking up the assist on that shot.

The Lady Bears opened the throttle up just a notch in the second quarter, nearly shoring-up with Hollister 10-8 before the buzzer. At halftime the score was 20-13, a gap which seemed to open up from nowhere.

“We should have been tied or maybe had the lead after the first,” said Houk. I think we made eight field goals total for the game. You know, it doesn’t matter who you play that’s not going to get it done.”

Hollister did not fare any better, only picking up three from personal fouls.

After the break the game continued with the Lady Bears only managing seven points, increasing the deficit by 11.

Into the fourth the Lady Bears eyes were opened to the situation, but at a time too late in the game to benefit from. With 13 points they beat Hollister in the fourth but having lost the other three quarters ultimately sunk Ava’s ship.

Keyes came up with two threes shot from the wing-to-corner area of the court but was shut out from shooting earlier in the game. Olivia Gastineau chipped-in a long ball of her own adding to her sister’s shot from the paint and the two brought in by a heavily guarded Hannah Evans.

Fouls were not necessarily the pitfall for the Lady Bears. A disciplined first half gave up just seven fouls – the bonus not in effect until there were just 35 seconds left in the half.

The second half was a slightly different story. Ava put up the bonus with five minutes left in the fourth and Bailey made good of the chances from the line shooting 75-percent in the second half, 83-percent overall.

Hannah Evans was at 75-percent and Olivia Gastineau was able to draw two fouls – on an and-one – but missed the first two for 33-percent from the line.

Had the first three quarters of play gone as well as the fourth, the Lady Bears might have pulled off the win to start their season on a high note.

The boys game in Seymour was cancelled as many on the basketball roster were also on the football roster, poised to compete Saturday against Clark County in the State Semifinals.

The match against the Tigers was rescheduled for December 5, crowding their opening week with games at Gainesville and Mansfield already scheduled.

This put both benches on the road Thursday at Seymour. 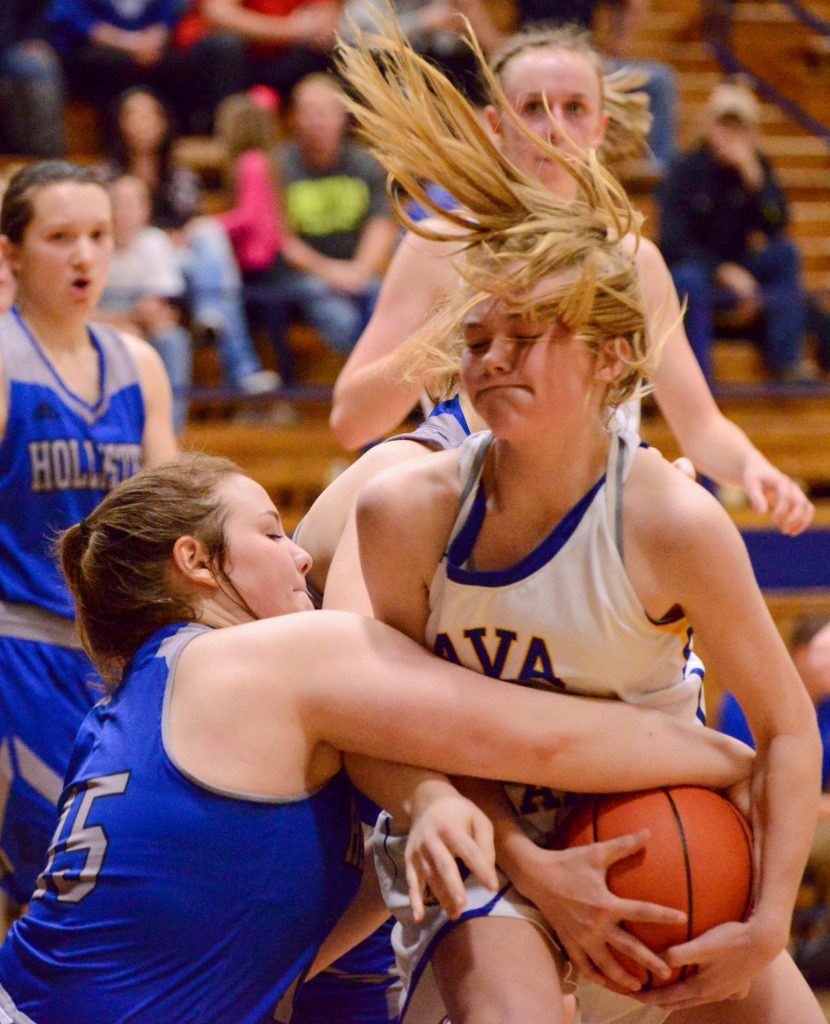 Ava High School freshman Lexie Gastineau (21) struggles for posession of the ball during a game against Hollister on Tuesday, November 26, 2019, in Ava. (Jason Hoekema/Herald) 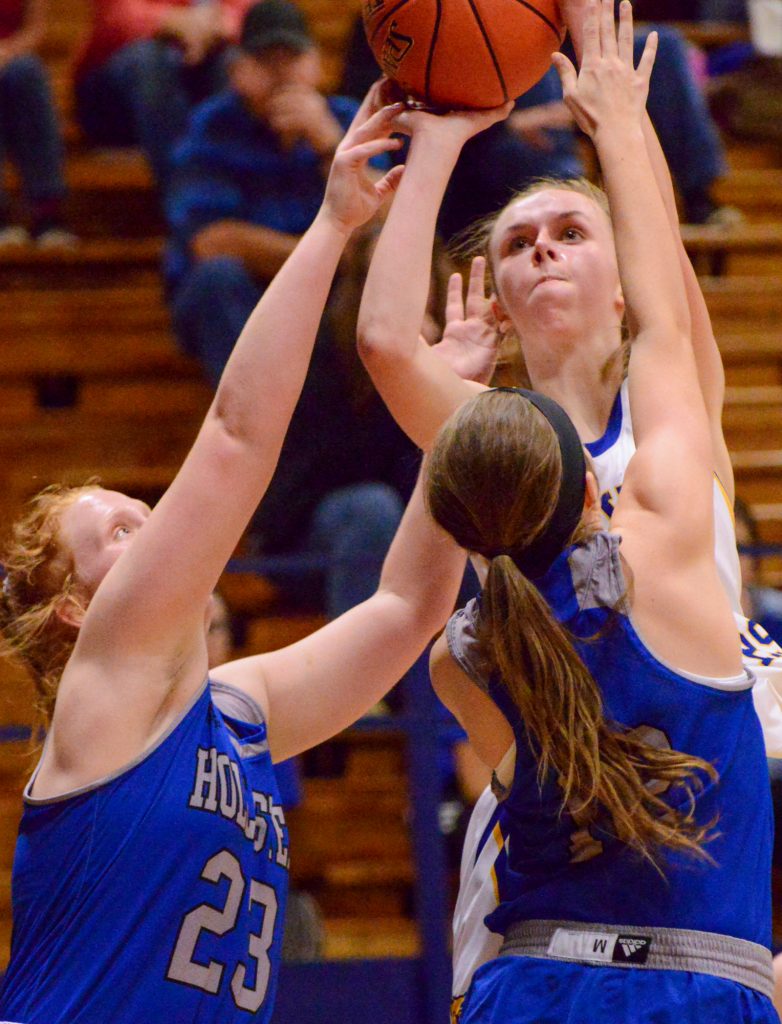