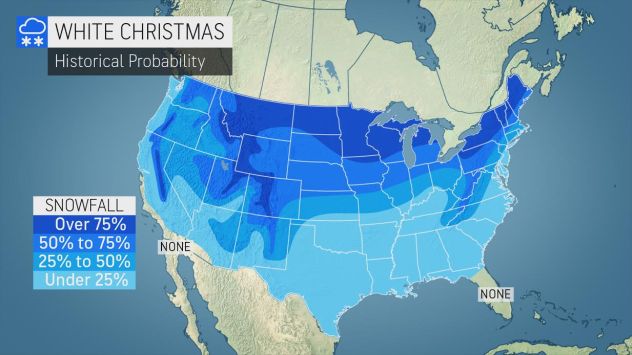 (AccuWeather / NOAA’s National Climatic Data Center) This map shows the historical probability, based on 30-year averages, of a white Christmas across the U.S. using the National Weather Service’s benchmark of an inch of snow on the ground during the morning of Dec. 25.

With a month to go until Dec. 25, many Americans are beginning to deck the halls, play the Hallmark Channel non-stop and fill their homes with holiday tunes. The sights and sounds of the season often conjure up scenes of a white Christmas — and just in time, AccuWeather’s annual white Christmas outlook is here.

AccuWeather meteorologists say the chances for a white Christmas are high across much of the West, the northern Plains and the Upper Midwest.

But for many Americans dreaming of a white Christmas, hopes may be dashed across most of the East, where milder air could prevent snow from forming.

According to the National Weather Service, to officially qualify for a white Christmas, a location must have an inch of snow on the ground at some point during the morning on Dec. 25.

Chances are slim across the eastern United States.

Despite a decent probability for snow along the I-95 corridor in most years, this winter will fail to provide the necessary ingredients.

“I do not see snow on the ground around the I-95 corridor, especially from New York City on south. Chances for a white Christmas are low,” AccuWeather Expert Long-Range Forecaster Paul Pastelok said.

While many years with a similar atmospheric setup — known as analog years — had storm systems coming through around Christmas, the air was too mild to yield snowfall.

The same is likely again this year, he said.

Similarly, chances will be low for the southern Appalachians, mid-Atlantic and Southeast this Christmas.

But those living in the central Appalachians region will have higher chances — around 40 to 50 percent — of seeing snow on Christmas.

For the Ohio Valley, a milder period preceding Christmas will likely melt off any snow, with the exception of the lake-effect region of northeastern Ohio.

But it’s too soon to rule out fresh flakes falling around these areas during the holiday, Pastelok added.