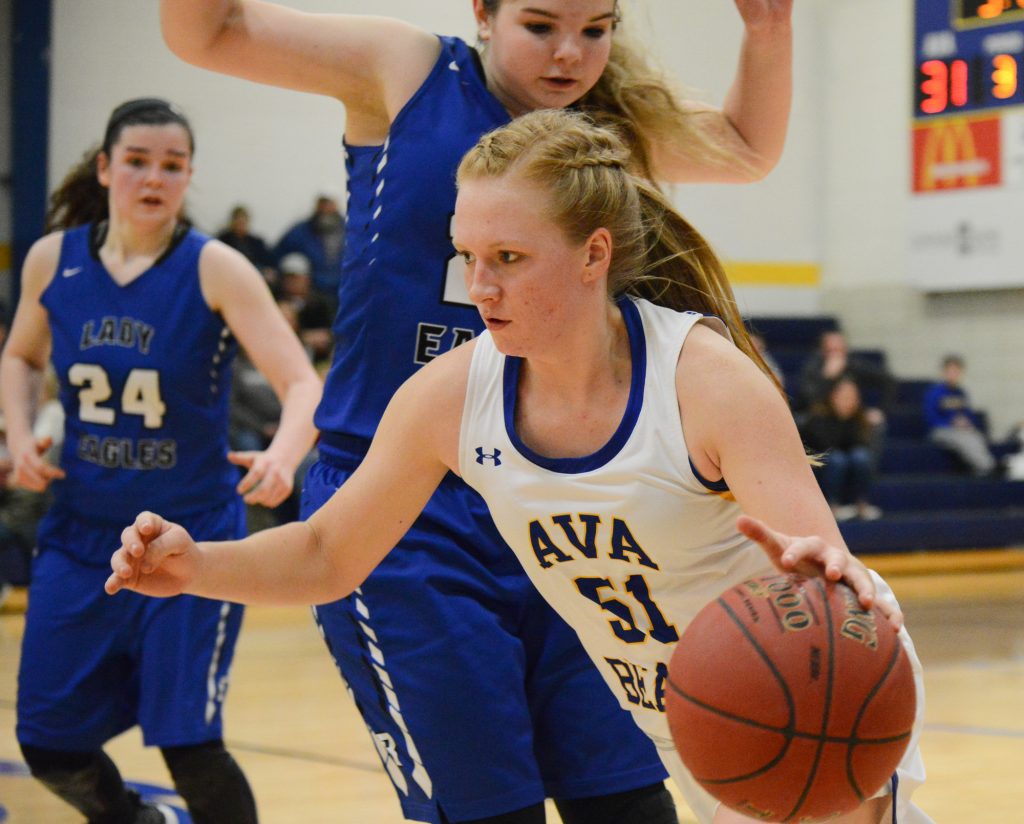 Ava High School's Eden Little (51) dribbles past the scoring table in a push to the bucket during a non-conference, non-district game against Bradleyville on Thursday, Feb. 7. The Lady Bears fell to the Lady Eagles, 54-43. (Jason Hoekema/Douglas County Herald)

Winter is coming, and basketball returns to the Ozarks in the time of plummeting temperatures when snow and ice become part of the high school athletic season.

Last year the Ava Lady Bears lost four seniors in Ashton Bewley, Emily Stillings, Araina Evans and Lauren Mendel accounting for 540 of the 965 points scored last season. Each of them is pursuing their secondary educations.

In their wake come replacements like sophomores Lauren Hall and Hanna Evans plus seniors Claire Fossett and Eden Little who accounted for 361 of last season’s points.

Mendel and Bewley led in two-point shots and then-freshman Hanna Evans led in shots from the arc with 12 long balls. Bewley reached 1,000 career points during her senior year when the Lady Bears went 14-11 overall and 3-4 in the SCA.

The Lady Bears’ season ended during the district playoffs with a 61-29 loss to the Fair Grove, who went 24-4 last season.

At the stripe the Lady Bears have lost two high-percentage shooters in Stillings and Evans who shot 86- and 71-percent, respectively.

The Lady Bears do have a couple of setbacks to overcome early in the season with the post position. Coach Nathan Houk, who continues to coach the girls’ team, believes that speed and athletic talent may make up for it under the hoop.

“The loss of Mendel to graduation and Julia Henry to a knee injury hurts our size and depth at the post, but Claire Fossett and Hannah Evans make us faster and more athletic at that position,” Houk stated via email. “Baylan Alexander, Keeley Akers, and Sarah Mendel give us depth in the post position as well. Sarah Mendel, Hallie Smith, Keeley Akers, Celia Fossett, and Baylan Alexander will help fill gaps in the forward and post positions.”

Eden little played most of her time on court on point, but also made her way down the lane and into the hoop some. Last year the now-senior put up 86 points for Ava. Houk believes she may be a contender to fill the big shoes left by Bewley.

“Little will play the point position some,” Houk stated via email. “I would like to slide her into Bewley’s spot so she can attack more in transition as the year progresses.”

“Last year’s seniors will be missed, but I expect us to be a better shooting team with the players we have returning and coming up,” said Houk.

A lot of that expectation is being placed on the shoulders of Evans and Fossett who will be expected to become an offensive duo to keep the Lady Bears afloat this season.

“Evans and Claire will both need to step up offensively for our team to continue to improve from last year,” said Houk. “Hannah will play mostly on the perimeter but will also be utilized in the post.  She will play wherever she is needed.”

With Evans, Little, and Fossett expected to fill different roles this year the rest of the court falls to the up-and-coming ladies which may have only played junior varsity last year.

Familiar names from softball season – Olivia Gastineau and Lexie Gastineau – along with Sam Keyes, Laynie Isaacs and Emaly Keyes will step up and fill-in in the guard according to Houk.

Road games have been a sore issue for the Lady Bears last year. Nearly half of their road games (tournament games included) went down with losses.

In the information furnished to the Herald by coach Houk, the Lady Bears are expected to face a long-traveled second half of the season where at least 11 of their games are separated from Ava’s home court by MoDOT’s asphalt.

With the loss in height the Lady Bears move to their speed game to balance the youthfulness of the roster. Houk believes that this year’s starting five may not have as much experience under their belt compared to other seasons, but their individual skillsets will shine this year.

As with most things, consistency is key. Last year the Lady Bears scored an average of 56 points per game (ppg). Of those points, 83 three-point shots were sunk last year. With Keyes and Evans both on the team at the same time we could expect more long ball shooting this year from the team.

More difficult programs to overcome for the Lady Bears will include Liberty-Mountain View (26-3) and finished their season in second place at the Class 2 District 3 Championship while Licking finished in first and with a season record of 23-4.

The shuffle puts two former District Heavyweights in the mix with Ava, which will likely lead to a challenging season.

The Lady Bears will be jumping back-and-forth on the road until they begin a long home game streak beginning on December 19. From then through January 16 they will play at the homecourt.

The loss of height in the post will likely be a setback in rebounds and shots from the post.

With two heavy-hitters in the new District assignment the Lady Bears will have to overcome the Lady Eagles even with the loss of their Division I prospect, Piper Francis. The Lady Bears hold an all-time MSHSAA record of 3-11 against the SCA rival.

On the other hand, St. James comes in with a District title from last season. Ava has not had an opportunity to face the Lady Tigers in recent history, but St. James is returning this year with six juniors and seniors.

Licking is slotted at number four in the state’s Class 3 finishers and their roster returns Karlee Holland according to MaxPreps.com. Holland, their point guard, averages 19.5 points per game with a career 1,270 points.

We can expect to see the Lady Bears to finish somewhere in the middle of the mix at the end of the season.