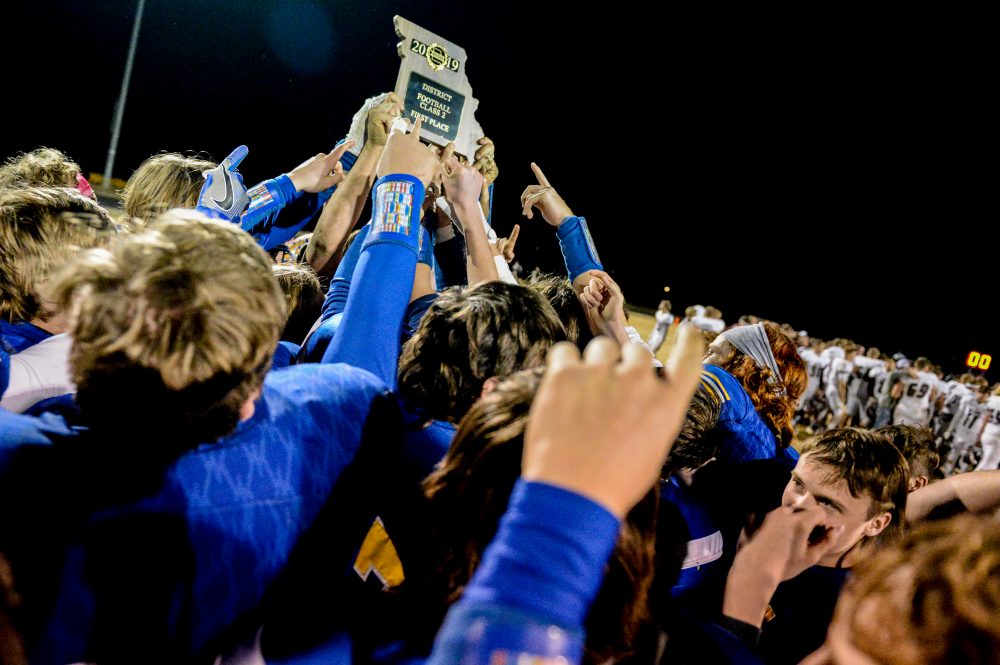 That was the look Josh Bray gave over his right shoulder as he hauled the ball down the far side of Silvey Field on Friday, just before hitting the pay dirt alone on a 76-yard touchdown pass completion in the second quarter against the Bears in Maroon from Willow Springs.

It was also the tone set on the scoreboard after 48 minutes of play as Ava fans relished in the 36-point goose egg delivered to Willow Springs.

“I just think we were more focused,” said coach Dan Swofford. “I don’t think we were focused last time. We didn’t have school that day. I mean, blame the coaches. I can look at myself like I didn’t get those guys ready. So (today) we were ready. We were going to make a statement this time.” 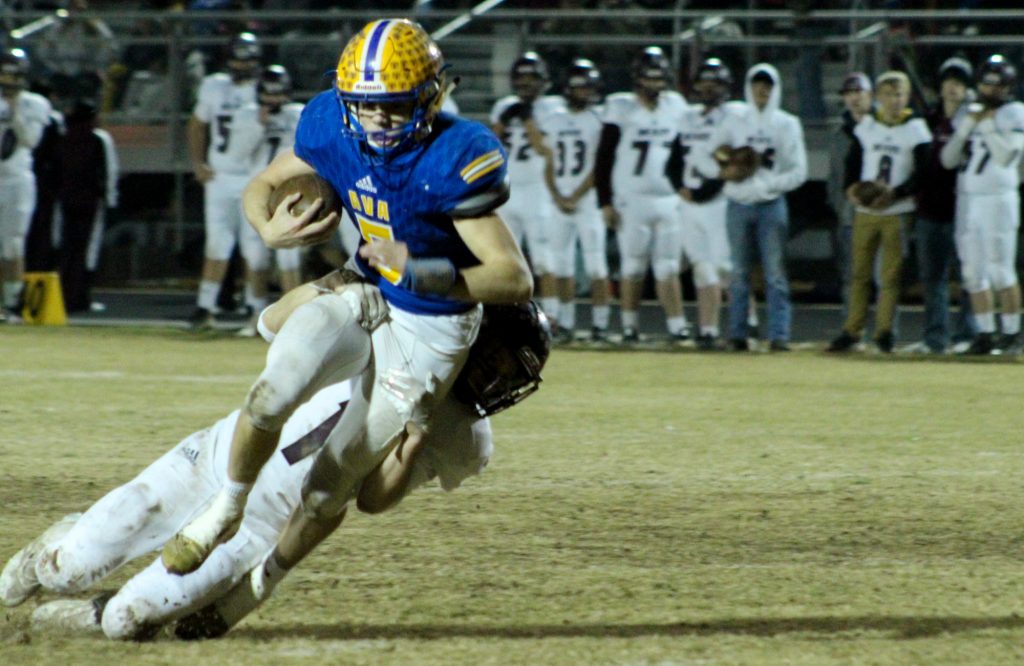 Friday’s victory came with the third-consecutive Missouri State High School Association District Championship. This is the first time in history that Ava has accomplished the feat and advanced deeper into the playoffs.

This is also the third-consecutive time the Ava Bears have had to go up against Lamar and carry two losses since their first meeting in 2017.

That year the Tigers won the State Championship, adding to the six titles back in the school’s trophy case.

Things have changed a bit, though.

The Tigers’ reign was sparked back in 2010 when the program clawed their way to fourth place in the State Tournament. They came back in 2011 and took the crown.

On paper the Bears’ have the statistical advantage Saturday, but it’s way too close to make any kind of predictive call. The Bears have averaged 39.4 points per game while Lamar trails by less than one, with an average of 38.6 ppg.

Defensively, the Bears also hold the better number. However, it’s splitting hairs at this point in the season. Ava has allowed an average of 13.5 ppg.

In last year’s competition the Bears held the lead over Lamar, 22-21 with nine minutes left in regulation. They missed the two-point conversion, though.

The Tigers took that lead back with a touchdown by Duncan Gepner from the one.

The Bears answered back with a 22-yard play between then quarterback Caleb Johnson and then-receiver Nate Swofford. Johnson reached out and hit Josh Bray in the endzone and Swofford squeezed-by for the two-point conversion twisting the board back into Ava’s favor, 30-27.

The Tigers burned most of the remaining clock out of service with a 75-yard drive which put the Tigers ahead 35-30. Ava wasn’t able to break the Lamar defense and turned over the ball ending the game.

Things could have been different with a two-point conversion made earlier in the Fourth. The Bears could have closed it to a field goal’s difference.

That however, is all history.

“It’s just like it is. You’re going to play a top-notch team that is well prepared,” said coach Swofford. “Your guys have got to do the best they can, prepare the best you can and hope you know that your team come ready to play and get some things done and stay in the game.” 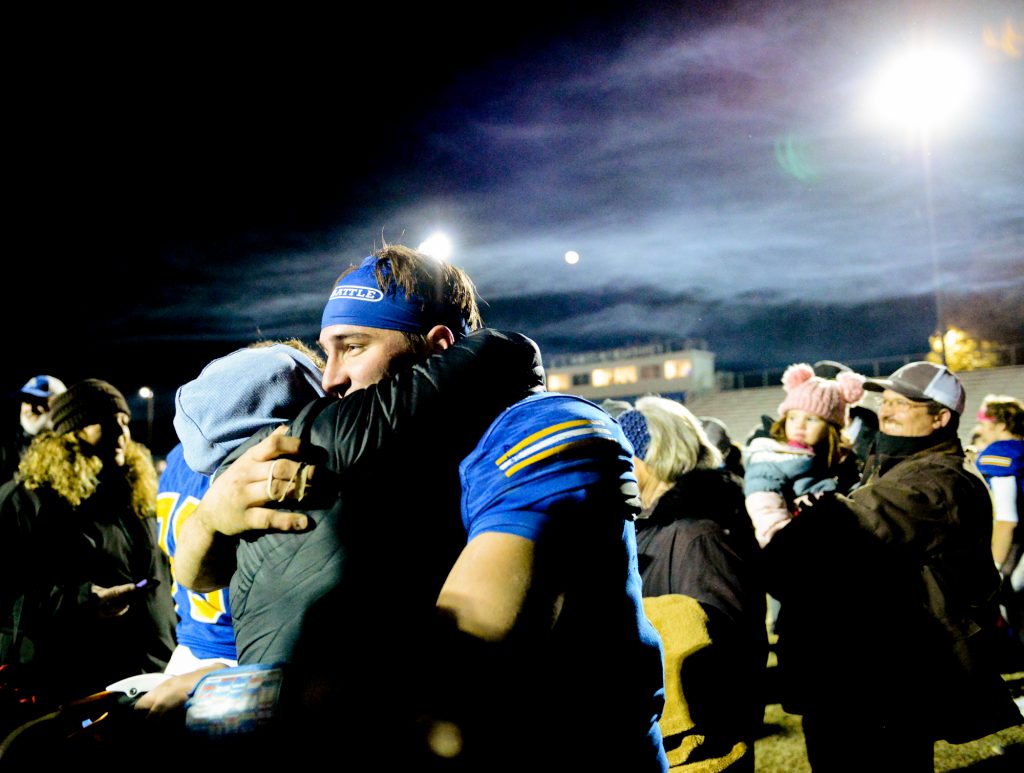 It is no secret. Everyone in the SCA and teams still in the horse race know who Kayden Myers is. Even if they don’t know his name, they have his jersey number and know that he can deal major damage to an unprepared defense.

Last time the Bears brawled Myers rushed for 226 yards and two touchdowns which helped Ava beat Willow Springs 54-32. This week the Willow Springs defense came studied and prepared for him.

Myers was held to shorter-than-normal rushes, picking up just 47 yards this past Friday. The only other time he was held to such a short distance was during the matchup against Hallsville in Week 2.

He was stopped at a longest carry of nine and averaged 2.94 yards over 16 carries.

When a team shutdown your best back? Make him a blocker.

“We’d rather have him run down the field ball in his hands,” said coach Swofford. “Tonight, once we saw what (Willow Springs) were doing he turned it, switched roles and became a blocker. (Rushers) were getting behind them and (he) did a great job. I’m just proud of my boys.”

On several runs Swofford could be seen tucked behind the senior who opened the defense for him allowing him to make big gains including a 72-yard scoot up the middle for a touchdown QB keeper in the third.

Myers did get time carrying in tough situations, though.

He was used as the first down option and was the go-to player to guarantee a couple yards to convert to first down.

When the rush was out of the question, Myers set up shop right behind the defense for a passing first down conversion on a 22-yard screen reception.

Myers still made his mark on the scoreboard, though. In the fourth Nate Swofford put the Ava offense on the Willow Springs ten-yard line with a breakaway 35-yard keeper up the far side of the field and through a spread defense.

No one got their hands on the senior quarterback until a shoestring tackle finally stopped him.

That’s when Myers got his job handed back to him with a purpose. Get to the pay dirt. Hustles up the middle for nine put him in guarantee distance. One push by the juggernaut put another six on the board.

If you were to go back into the stat book early in the season you would find that senior quarterback Nate Swofford has grown into a multi-use quarterback.

Ava depended heavily on their rushing game early on but have opened up the playbook and started using the airborne route of getting the ball past the defense.

Against Buffalo the Bears rushed for 309 yards and had just 26 passing. Since then Ava has become a balanced offense with weapons both on the grass and in the air.

His first two uncharacteristically missed their targets. Once on a fourth down conversion attempt then a bomb which went a bit too far for Zach Mendel to get to.

After those hiccups Swofford appeared composed and in control even when the Willow Springs defense poured through the Ava offensive line.

A highlight reel worthy pass completion made it to Spencer Skyles in the second quarter resulting in a 76-yard touchdown completion.

Swofford was on his feet as the pocket disintegrated. Scrambling to the far side of the field, he let it go with an off-balance throw.

Fast forward to the third quarter, Swofford broke away for a 72-yard touchdown carry, but that feat wasn’t as impressive as the second touchdown made by the Bears in the same quarter.

“(His) accuracy (has improved),” said Coach Swofford. “He hadn’t played quarterback for several years and it’s a process. Something he has gotten better at. We like for him to peak this time of year when we work (on passing) after we get our run game squared away. It’s nice to see how that worked. The process worked well.”

Swofford has plenty of time to watch the pass play unfold but had to scramble again as defenders broke through the offensive line.

With the snap on the Willow Springs 43 Swofford’s arm had just completed forward motion and released the ball, less than a second later he was on the ground.

On the other end of the bomb was Skyles who made the catch for a 43-yard touchdown pass completion.

To cap it off, Swofford also found the dirt for the extra two points. Next to his name in the books are credit for three touchdowns, two by airmail.