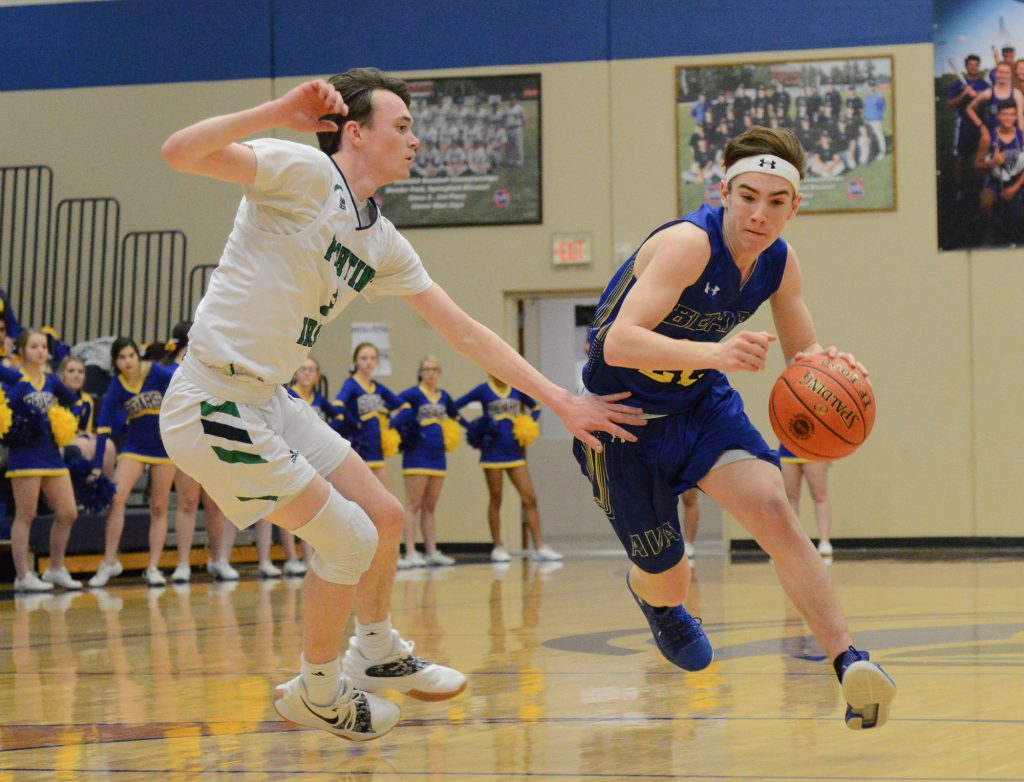 The boys team faces similar losses compared to the ladies’ team, graduating four this past summer. Tom Emerich and Drake King accounted for 256 total points on offense. Emerich was one to aggressively drive the lane while King played the spot in the post, easily chipping in two pointers with his advantageous height.

The boys team has another major change this season, though.

Mike Mallow is no longer the coach for the Ava Bears Basketball team.

Now coach Damon Seiger steps in to fill the position and having started the job in August, he has a lot to learn of the players’ strength and weaknesses.

Seiger comes to Ava from Waynesville. He has coached for 17 years and is a husband and father “first and foremost.”

The Bears also welcome a new assistant coach this year, Kevin Armstrong. Both of the coaches recently finished the first official week of practice with this year’s team and are working on a “balanced attack” where the team’s sprint to the other hoop doesn’t just involve any individual player.

“Not taking the job until the first week of August I was unable to have a full summer with these guys to figure out their strengths and weaknesses. We’ve just completed our first week of practice and are still figuring out our roles as well as which guys are going to be our defensive stoppers.

Emerich scored 144 points last year made up of 40 twos, 12 threes, 28 while shooting 74-percent from the line. Meanwhile, King delivered 112 points mostly from 44 two pointers, but he also shot 92-percent from the stripe.

William Mork and defensive specialist Caleb Johnson were also lost to the never-ending concept of time. Johnson took 11 charges last season and was part of forcing 32 transition points, 16 from steals and was credited with 20 deflections.

Blake King went over the defense and sunk the ball from beyond the arc 43 times. When unable to get the clear shot, he was able to swoop into the lane and put up 41 two-pointers.

Last year Dalton scored 397 points with 121 twos and 26 long-balls. Dalton also picked up 77 points while shooting 72-percent from the charity stripe. This year the young man is expected to do even better both on and off the court.

“Andrew is a very skilled talent that can beat you inside or out,” wrote Seiger.  “He also has the ability to make those around him better and I believe he will develop into an even better player this year with more confidence and a physically-stronger frame.”

Kaden Bruce returns this year but may not play the point in every situation. Seiger wants to take his offensive approach which could include Blayne Mendel or Nate Swofford running the spot.

Instead, choosing which five are on the maple will take player matchups into consideration as well as a new defensive approach.

“We believe in playing inside/out offensively and will really look to improve defensively from a year ago,” Seiger wrote via email.  “New assistant, Kevin Armstrong has had a lot of success running defenses for many years and will be looked to in bringing in a system that has been proven at very high level.”

Foul points can sometimes make-or-break a team during a game. Some close calls from last season were possibly because of lending the double-bonus to the opponent, and sometimes early in the half.

The Bears shot an overall 71-percent on behalf of their opponents’ charity for 243 points last season. Although there is no real “magic” to shooting, consistency is key as Caleb Johnson showed us with his scoot, set, shoot routine from the three.

“I’m not sure if there is any secret potion to shooting other than working at it and being consistent with what you are doing,’ wrote Seiger. As far as the (free throw) shooting goes, we have a team of talented kids that practice their craft.  This will be a daily part of our practice and something in which we will strive to do well at night in and night out.”

Even with a strong group of returning players, coach Seiger made it apparent in his email that players may be shuffled around and that strategies are going to change – just like the coaching staff did.

“I think we will have a balanced attack with several guys filling those roles,” wrote Seiger. Our system is not built around a single player but intended to get many involved. So as far as points are concerned, I predict we will be balanced across the board with many contributors.”

Ava moves into a new district this year. MSHSAA released the class and district assignments last year. Just like the girls’ team, they face the same opponents this season.

Last season the Bears finished their regular season, 13-12. One of the major changes with the new District assignment is not facing the area’s hardest-hitting high school team, Springfield Catholic.

The Irish were nearly unstoppable with a 2018-2019 record of 29-4 and finished second in the State Class 3 Tournament last year. There have been concerns in the community regarding Catholic’s ability to recruit as a private school, able to pluck top talent from the Springfield Metro area.

They were also an invite for the annual Bass Pro Tournament of Champions last year but will not make another appearance there this season.

Now Ava faces heavy-weight challengers, some old and some new.

Last year the Bears were ever so close in finishes against the Panthers, losing twice ,92-87, and 73-67. However, they also lost six seniors including Dawson Hiler, Bryce Lauderdale, and Noah McCallister.

Unless the Panthers had sleepers on the junior varsity roster, the Bears may have the upper hand this season. They still have to play Licking and St. James, though.

The Bears may very well finish in the upper reaches of the MSHSAA District, but only if they can overcome the adaptations of a new coach and new playbook while managing to balance last year’s losses of Drake King, Caleb Johnson, and Tom Emerich.