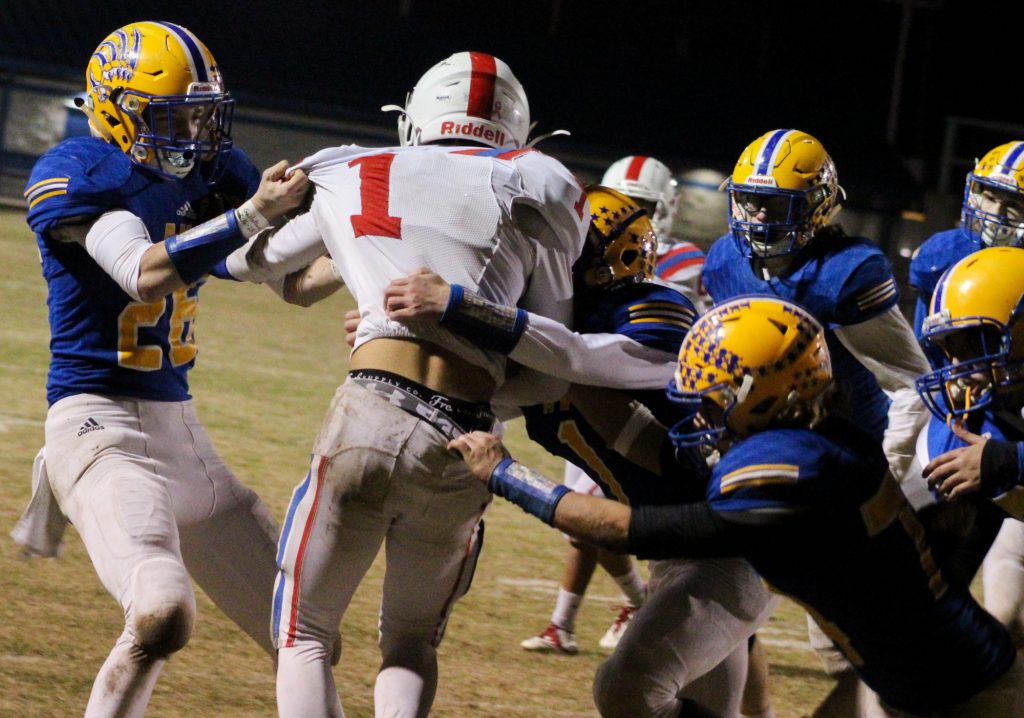 Ava High School junior Colby Miles (26) pulls down on East Newton running back Wyatt Moore as the rest of the Bear defense converges at the carry during a Class 2 District 3 playoff game Friday, November 8, 2019, at Silvey Field in Ava, Missouri. (Kayla Dry/Special to the Herald)

A postseason win should be sweeter than any regular season success, but unfriendly banter in the stands and on-field talking led to heightened tempers last Friday. The fourth quarter was coming to a close in the final minutes of the 34-6 win for the Ava Bears when things erupted at Harlan Stadium.

With 4:50 left in regulation, quarterback Nate Swofford was flopped onto the sideline by a horse collar tackle from Jackson Schriever which took the disapproval from the spectators to get laundry on the field.

With 15 yards from the spot of the foul giving the Bears the Patriot red zone in a single play which started on the other side of the 50, the disapproval shifted to the other side of the stands as heckling and heated words began their exchange right in front of the north end of the press box as the Bears failed to convert on fourth-and-11.

It took level-headed fans from either side to calm the situation as one angered man fetched the Ava R-1 administration and school resource officer, pointing out visitors which were involved.

No one was thrown out at that moment, but the poor example of spectator sportsmanship set a foul air which seemed to carry onto the field with less than a minute to play.

Ryan Millett dropped his helmet for a hit while carrying the ball, which did not sit well with already-heated Ava fans in the stands. The disapproval of the officiating staff’s indifference was made known.

Exchanges of on-field banter were going on throughout the game, a few obvious scuffles on the tackle and then problems down field sparked a brawl on the East Newton south sideline and exchanges heated back up in the stands.

“I don’t have a whole lot of good to say about it,” said Coach Dan Swofford. “That’s where I’m at with the whole thing. The situation, their coaches and how they did things, and the referees as well. It’s as simple as that.”

The Bears won the toss and deferred to the second half, as has been the norm this season. Even on the professional level, more teams join the trend every year rising to more than 68-percent in 2014.

The decision is more than just about luck. It can determine momentum through the halftime break. Ava had possession in the final seconds of the first half, spiking the ball to stall the clock. The Bear offense set up a screen with Kayden Myers Myers right behind the Patriot defense. The play worked well as the attention shifted back to the pocket when it was determined that Myers did not have the ball.

Nate Swofford made the short toss and found Myers for a nine-yard touchdown reception to top-off a one minute and 53-second, 51-yard drive for eight points.

Fast forward to the third quarter and the possession lasting 5:53voering 65 yards through four first down conversions, and you saw Swofford hit the pay dirt after the offensive line opened the East Newton defense like Moses parted the Red Sea.

That is two touchdowns in back-to-back possessions for the Bears, and the momentum to go with it.

It can also bite teams back as was seen in the Steelers-Ravens game in October. The Steelers deferral in OT worked at first, but a fumble by the Pittsburg offense on their second possession led to field goal range and a 26-23 victory for Baltimore.

Whether it’s the halftime double-dip or other payoffs, the deferral has worked for the Bears this season.

This game, out of the 48 minutes put on the board for game time, the Bears maintained possession for just over 34 minutes. Their longest drive by the Ava offense lasted nearly eight and one-half minutes in the second quarter over 65 yards.

Yards were hard earned by the Bears with Myers on the Patriot’s minds every snap. The farthest the leading rusher got on Friday was 11 yards, and the longest in the second quarter was a carry for eight.

The Patriots were working to shut down Ava’s top athletes, but the Bears responded in-kind.

“I knew they had some really good athletes,” said coach Swofford. “They had some dandy athletes that showed up there early on with (Schriever) catching that ball on that pass from (Jeremiah Stewart). We had to contain those athletes and we did a great job in the run game. We stopped the run game completely and without a little passing game they didn’t have much going on.”

The Bears converted to first down five times – once by measurement – before Myers finally found the endzone capped by a pitch to Spencer Skyles for the two-point conversion.

Leaving just 3:27 on the clock, the Bears defense followed up withtheir defense to pound the East Newton offense into a negative seven-yard drive back on their heels to the Patriots’ own 33.

The Patriots’ punted the ball after just under 90 seconds to start Ava on their final drive of the first half at the Bears’ 29. Skyles was shut down on the first snap but Swofford found a gap in the defense and exploited it for a 15-yard gain and a fresh set of downs.

Offsetting penalties – roughing the passer on East Newton and an ineligible man down field on Ava – set the Bears up for a first down repeat. On the second try Swofford took it up the middle for five yards before the Bears coaching staff called a timeout with 0:43 left.

Whether it was orchestrated or played out by chance didn’t matter once the ball left Swofford’s hands. At first the play looked to fail as he scrambled in and then out of the pocket with the Patriot defense on his heels, but Skyles was found downfield for a 35-yard bomb which put Ava on the East Newton 16 with four new downs.

The Bears generally do well inside the opponents’ 20, with the exception on some two-point conversions. Myers was under the gun and watched closely, stopped at just a three-yard carry for a player who has averaged 7.4 yards per carry.

A pitch out to Skyles raked-in another four yards putting the Bears in a third-and-three situation. With the clock draining fast, a quick spike of the ball set things into a now-or-not this half situation.

On the Patriots’ nine Myers pushed through the defense on the snap. Once defenders cleared him of having the ball the defense shifted to Swofford.

The misdirection put Myers in a perfect spot screened behind three defenders for a pop-up, nine-yard touchdown pass to kill the clock with the score sitting at 22-6.

Out from the break Ava didn’t change their tune, either.

Receiving the ball (and benefiting from the double-dip deferral) the Bears marched downfield over six minutes and 65 yards for the payoff.

Myers made a big offensive hit against Tavin Boyd during an 11-yard carry to the Patriots’ 46. Followed with another five by Myers, the Bears’ offense ran some misdirection with a fake handoff to Myers allowing Swofford to eat up seven yards for the first down on the Patriots’ 34.

The situation lost some steam moving into third-and-eight, but Myers came up like a snow plow with Swofford in-tow for 12 yards and another set of downs.

On the opponent’s 20, Ava had a hold set them back to first-and-20, a situation coach Swofford has claimed to be difficult to overcome with the offense “behind the chains.”

On second-and-16, Swofford was on the run again. What appeared to be a desperate toss downfield found Skyles in the right spot for a big 20-yard gain to the six-yard line.

This is where Swofford walked through the parted defense for the touchdown discussed earlier.

In the third quarter bickering had started in the stands, one Ava fan responding to a snark comment with, “read the scoreboard!”

A facemask against East Newton was the last thing that defense needed because it put the Bears in the zone at the 14.

You can take one guess at who walked the pigskin in for an 11-yard touchdown rush.

At the end of the third the Bears were up 34-6 and had eaten more than nine minutes of game clock.

Then adding salt to an open wound, Skyles also picked-off a pass with less than a minute left in the third. 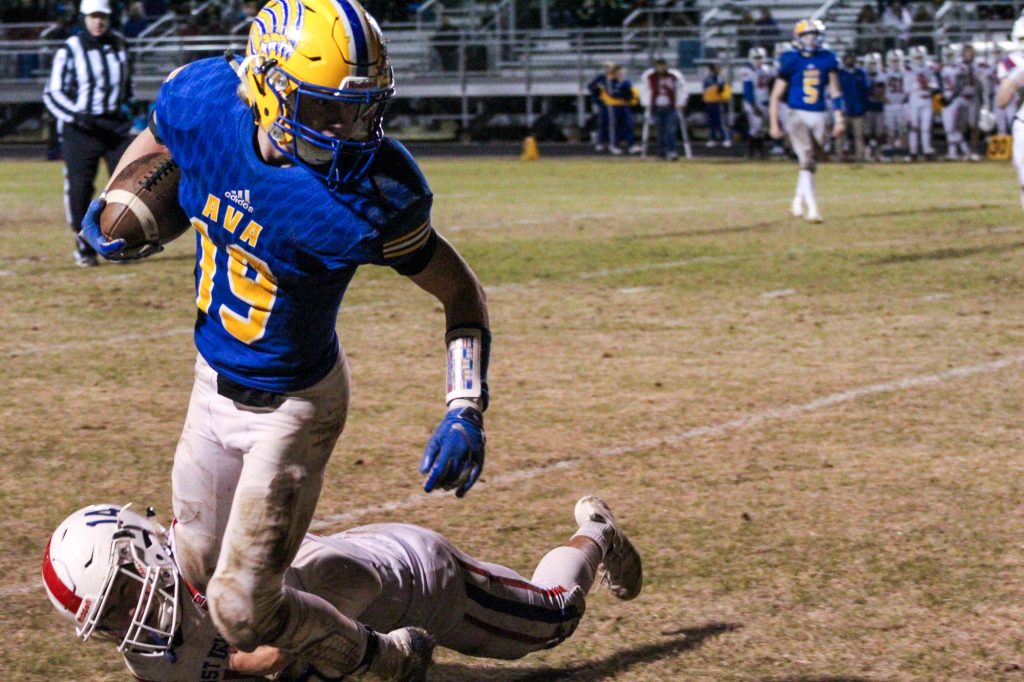 Ava High School senior Josh Bray (19) turns as he is tripped up by an East Newton defender during a MSHSAA Class 2 District 3 Playoff game Friday, November 8, 2019, at Silvey Field in Ava, Missouri. (Kayla Dry/Special to the Herald)

The fourth was stagnant for an unknown reason. Starters had not been pulled and the Patriot defense was sniffing out counters left and right, literally.

“I don’t know. I felt the same thing because we had to punt, and we hadn’t had to all night. (East Newton) played hard and they never gave up.”

After a pass dropped off the hands of Blake King, the Bears were forced to punt with 7:51 remaining. The Patriots didn’t do much with the ball, either.

Instead East Newton was forced to kick it away from their own 17 to the Ava 34. Instead of moving forward, the Bears were stuck on their own 34 into the third down. Swofford was stuffed by a blind-side blitz from Noah Brashers, who hid on the end of the defensive line unguarded.

This is when Swofford took the horsecollar for 15 yards on top of his carry to the Patriot 34. Josh Bray picked up another 13 yards before the offense shutdown on the 11-yard line resulting in a turnover-on-downs.

Colby Miles came up with a monstrous, 13-yard sack for a loss setting back East Newton to second-and-23. Then the fight broke out and the game ended on that low note.

As for the incident on the field and moving forward from it, coach Swofford planned on working with the team on “keeping our composure and doing things right. We’ve got to keep ourselves together and be ready.”

Looking at the playoff brackets, things are shaping up for a possible rematch against the Lamar Tigers.

Despite the 54-32 win for Ava in Week 9 for the SCA Title, the Bears in blue had to earn it. Having faced Ava with fresh film in their pocket, Friday could be a big game to watch.

The last time the Bear SCA rivals met Ava was able to run for 346 yards and pass or pitch out on the option for another 192 to average 9.44 yards per snap.

The statistic which defines that game lies in points allowed on turnovers. The Ava Bears let 12 points go on instances where they had to give up possession on a failed drive. Salem and Thayer were the only others within the SCA to score on turnovers – Buffalo and Hallsville are the other two.

Beyond that the Ava Bears still have the advantage on paper with an average of 39.9 points scored per game, nearly double of the Bears in Maroon. The Ava Bears have also allowed fewer points per game, with a small average of 15.5 compared to the Willow Springs’ 22.8.

“They put a bunch of points up on us last time,” said coach Swofford. “We’re going to have to be ready to slow them down. I’m sure defensively they’ll be they’ll be better prepared, and they’ll be ready to play. And hey, it’s the district championship. It’s going to be a big game.”

Meanwhile, on the other side of the bracket Lamar and Fair Grove collide to determine who moves forward to the November 23 battle for the State Quarterfinal slot. The winner of the game on the 23rd will move forward to face one team out of the Palmyra, Clark County, Hallsville and Christian pool of contenders in the State Semifinal round on November 30th.