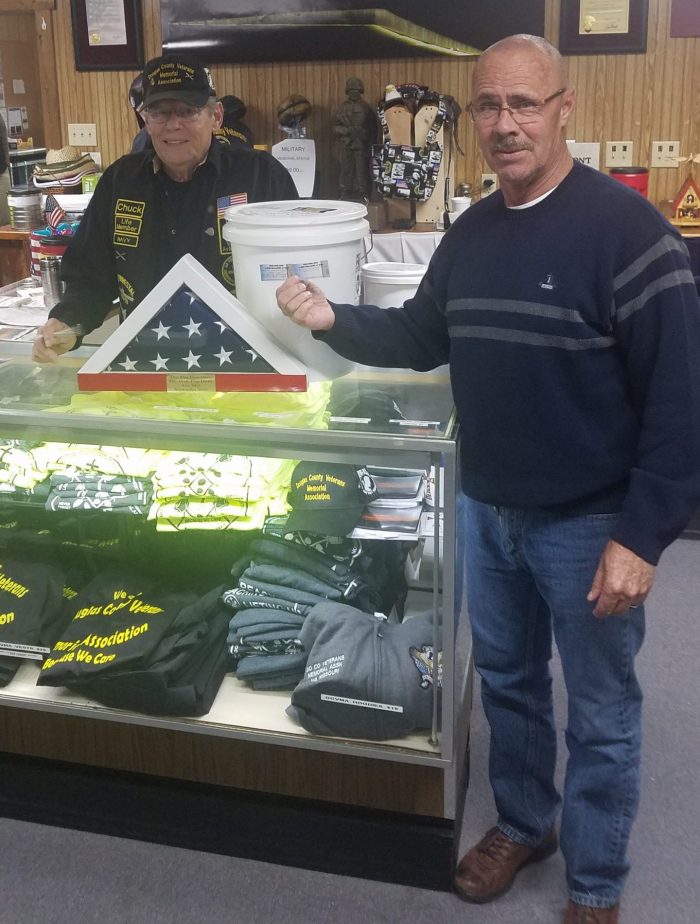 Mayor Burrely Loftin, right, is holding the winning ticket drawn for the 1000 Gallons of Gasoline giveaway sponsored by the Douglas County Veterans Memorial Association (DCVMA). The winner was Ms. Barbara Martinez, of Marshfield, Mo. A second prize ticket was drawn for an American flag from The Wall That Heals event last year in Ava. The flag, sitting on the display case above, is folded into a triangle and placed in the display case made by Chuck Gillespie, above left. Alice O’Connor, of Cabool, Mo., was the winner of the flag. Photo submitted

Tuesday morning was a busy morning for members of the Douglas County Veterans Memorial Association.  Some members attended the Veterans Memorial dedication ceremony at the City Park while others continued to prepare our cookout celebration luncheon which provided a free lunch to community service members.

The DCVMA served over 100 people with several members of the Ava Volunteer Fire Department and EMTs attending the event.

DCVMA President Butch Linder said, “Of course it helped tremendously for us to open the kitchen, cook and serve those attending inside our building.”

While it was bitterly cold outside, guests were comfortable in shirt sleeves and enjoyed lunch in a nice warm environment.

At 11 a.m., Mayor Burrely Loftin was asked to pull two tickets from the tumbler to determine winners of the raffle.  The first ticket drawn was purchased by Ms. Barbara Martinez of Marshfield; she was the winner of 1000 gallons of gasoline.  The second ticket belonged to Ms. Alice O’Connor of Cabool. Ms. O’Connor won a folded flag and case.  The flag flew over The Wall That Heals when it was in Ava in September 2018.  The flag was displayed in a red, white and blue case made and painted by Chuck Gillespie.

Butch Linder acknowledged that he is grateful for those who attended the Veterans Day luncheon, and the workers who made it possible.

“The DCVMA looks forward to hosting fundraisers in 2020, and continuing to serve the good people of Ava and Douglas County,” Linder said.