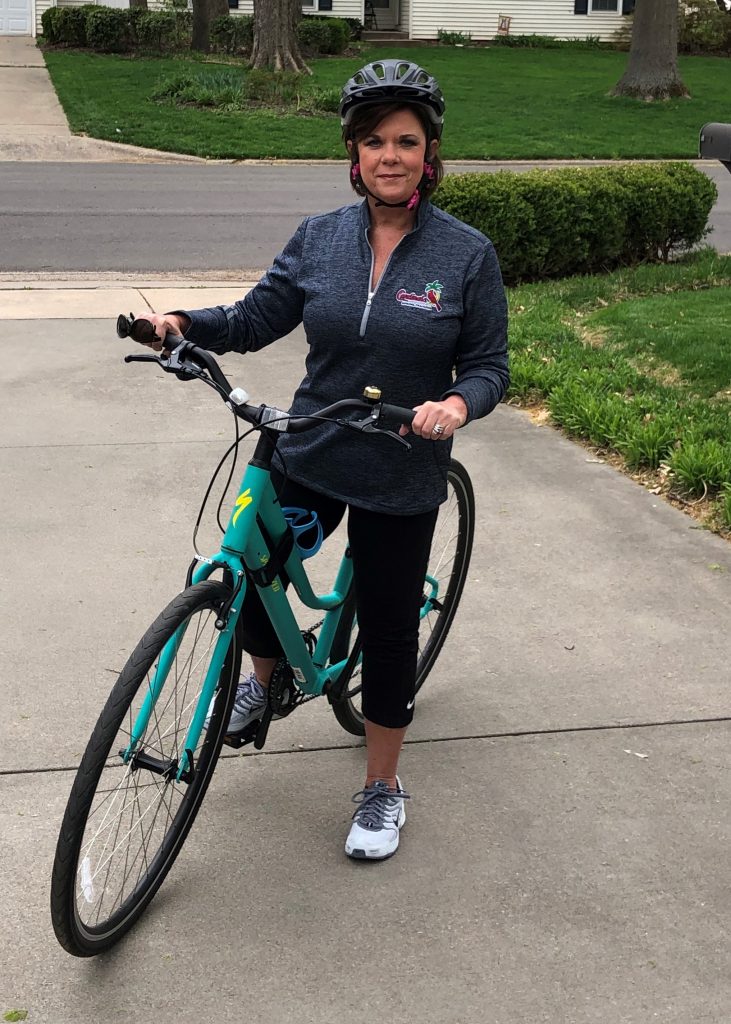 Keli McDonough prepares for a bike ride after having both knees replaced at Mercy Orthopedic Hospital Springfield. iovera° therapy helped her take fewer pain medications after her second surgery, and she healed much faster.

SPRINGFIELD, Mo. (Oct. 16, 2019) – They hadn’t even hit age 55, but Bekki Turner and Keli McDonough were dealing with such excruciating knee pain, they felt much older than their actual age.

“I was so athletic in my younger years,” Turner said. “But there I was in my early 50s and both knees were bone-on-bone. It was affecting my hips and back. I felt like I was aging very quickly.”

Both women say they’d gotten used to factoring the pain into everyday activities, many of which they just stopped doing. “If the parking spot was too far from the entrance, I couldn’t go shopping,” McDonough said. “I felt like all I did anymore was sit.”

Both opted for knee replacements, and like most, completed one surgery before scheduling the next. “It was pretty painful,” McDonough remembered. “I was on a lot of pain pills I’d never been on before in my life. I was taking quite a lot and I was still in pain. On top of that, I didn’t feel good while I was on them. My mind was cloudy, I was weepy and I wasn’t hungry.”

Still, once her first knee healed, McDonough was ready to schedule her second surgery – and so was Turner. But this time it would be very different for both, because they were among the first group to try a new therapy that eases the pain both before and after knee replacements.

iovera° therapy uses cold therapy to temporarily disrupt the nerve from sending pain signals. Using a handheld device and an ultrasound to guide them, doctors target the nerves with small needles and liquid nitrous oxide. A portion of the nerve is degenerated, and the pain signal can’t make its way through until the nerve regenerates several weeks later.

“We’re constantly looking for ways to use new techniques and technology to improve our patients’ outcomes and decrease their pain,” said Dr. Robert Jones, Mercy orthopedic surgeon. “We felt like iovera° therapy could make a big difference, and we knew offering it first to patients who’d had one knee replaced already would show us just how effective it could be.”

Both women visited Mercy Orthopedic Hospital Springfield for the quick outpatient procedure a few weeks before their scheduled surgeries. “It didn’t really hurt,” McDonough said. “It was like little zaps and not nearly as bad as a steroid shot. I stood up from that table and I looked at them and said, ‘I think I could go shopping!’ I actually felt like I could go to the mall, and I hadn’t been able to do that in a long time. I could still feel the grinding in my knee, but there was no pain.”

Turner agreed. “I’d been taking over-the-counter pain medications and icing all the time,” Turner said. “But after a few little injections, I felt relief immediately. Walking out was very different from walking in.”

For both, though, the real difference came after surgery when they took far fewer opioid medications for just a few days instead of weeks. “I switched to Tylenol pretty quickly,” McDonough said. “I was just never in the pain I’d been in before.”

“I was walking the day of surgery and haven’t stopped since,” Turner said. “I recovered so quickly with my second surgery.”

Without the pain, physical therapy progressed nearly six weeks faster for McDonough. “It made a huge, huge difference,” she said. “The iovera° lasted about four weeks after surgery, so I was able to do my therapy more easily. My leg just got stronger, faster.”

With new knees, the women are finished sitting still. “I ride my bike, I walk, I can do an elliptical,” McDonough said. “We went to Branson Landing the other weekend and I never even sat down! My life is back to where it should be.”