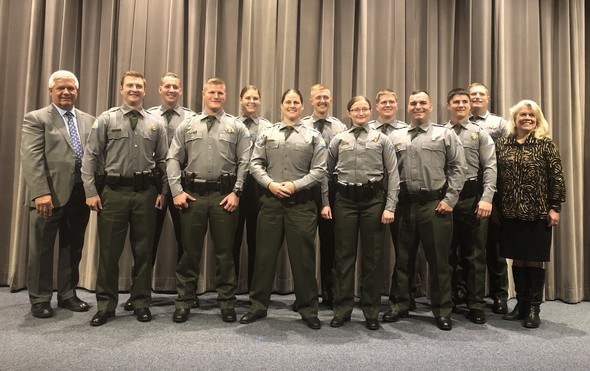 “When I think of our conservation agents, you’re not only enforcers of The Wildlife Code of Missouri, but first and foremost, you are ambassadors for this agency,” MDC Director Sara Pauley told the new agents. “You have a responsibility to carry forward and mentor those around you. That includes in your work and in your community.”

The new agents have spent the past six months living at the Highway Patrol Academy in Jefferson City while receiving intense instruction in and out of the classroom. Training included courses in legal studies, communications and conducting educational programs, and first aid/first responder and CPR certification. Agents also received training in criminal investigations, defensive tactics, firearms qualifications, and technical instruction in fish, forest, and wildlife management.

Upon successful completion of  training, agents are issued a Peace Officer Standards and Training (POST) license from the Missouri Department of Public Safety. The conservation agent training program is also certified by the U.S. Department of Labor’s Bureau of Apprenticeship and Training.

The new agents have been assigned to counties and will be involved in field training operations and special assignments while under the supervision of veteran field agents for a six-month probation period during which they will acquire vital field experience.