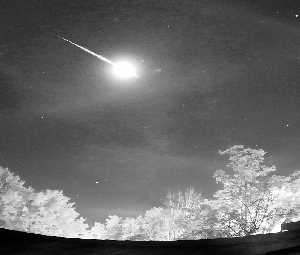 On Thursday, Oct. 17, this fireball was sighted and reported by four individuals from the midwest. The fireball, which has now been recorded by the American Meteor Society, was cited by individuals located in Bentonville, Arkansas; Walton, Kansas; Albany, and Jefferson City, Missouri. This black and white photo of the fireball shown above is on the American Meteor Society website, with photo credit given to Daniel B., of Albany, Mo.

Three different meteor showers are currently active, and according to reports from local residents, recent sightings have occurred in nearby Bentonville, Arkansas, and Branson, Missouri.

Two separate reports from Branson note fireball sightings occurred on Saturday, Oct. 26, around 10 p.m. and 10:10 p.m., respectively.  The meteor was described as “a bright flash of whiteness, with a short light blue streak – a very large falling star.”

At present, three unique sets of meteor showers are active, namely the Southern Taurids, the Orionids, and Northern Taurids, are in viewing display.

The Leonids, which are actually known for producing meteor storms become active Nov. 6th, and will offer viewing opportunities through Nov. 30th.

Unfortunately, the peak display period for the  Orionids has passed, as Oct. 21-22 was given this year as the best time for viewing their activity.   According to the American Meter Society, the Orionids are a medium strength shower.

The Northern Taurids are cited as active until December 10; they are projected to peak during the night time hours of Nov. 11-12.

Meteors are caused by debris entering the Earth’s atmosphere at a high rate of speed, and showers are best viewed after midnight. And, the darker the night sky, the easier it is to observe fireballs moving across the night sky.  If moonlight is prevalent, fireballs are more difficult to see.