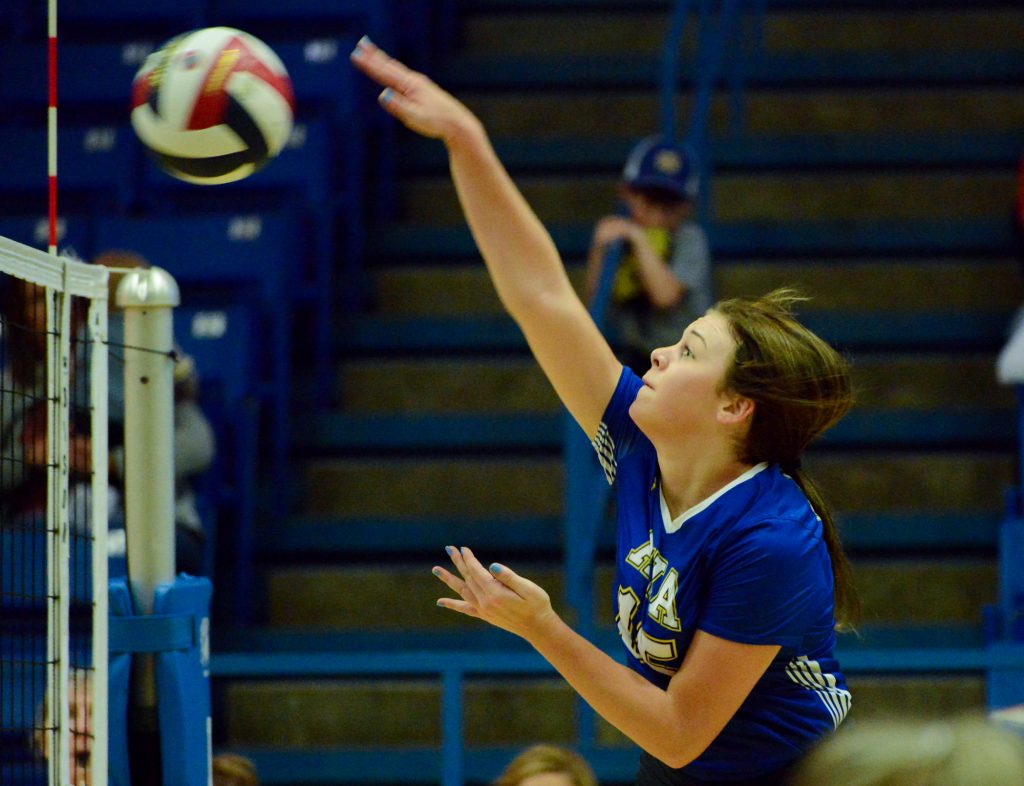 Ava High School offensive hitter Taylor Ernst (15) sends the ball over the net during the first round of the MSHSAA Class 3 District 11 Tournament against Willow Springs on Monday, October 28, 2019, in Marshfield, Missouri. (Jason Hoekema/Herald)

MARSHFIELD – Last year the Ava High School volleyball team made it past the first round in the district tournament with a 2-1 victory over Willow Springs but hit a wall that is Logan-Rogersville the next day with an 0-2 loss and elimination.

Earlier this year the Bear “cousins” met once already this year in a three-set fight where Ava prevailed, 2-1. This time around the court was flipped on the Ava Lady Bears who lost the match in three sets – 19-25, 25-21, 19-25.

One thing apparent in the first set was a lack of control and pacesetting from the Ava team. They have run over other teams when in command and control of the net and speed of the game.

Whether it be District jitters or the impending basketball season on their mind, the Lady Bears’ season is now over.

“We never took control of the game,” said coach Emily Petty. “We were trying to play catch up the whole time and we never set our own pace. It seemed like once we got a little bit of a lead, we lost it because we made silly errors, or we weren’t moving our feet to get behind the ball.”

Ava played as the home team on the court inside the Marshfield gymnasium and Sarah Dobbs started with the first serve which resulted in a point made by Claire Fossett with a push of the ball into the opponent’s court.

Willow Springs promptly answered with a kill from Hailey Sigman to Kaylee Downs who missed the dig. The Willow Springs Bears made Ava pay for the loss of rally with a short sprint of three points with a big block by Sigman and two defensive mistakes by the Ava Lady Bears. 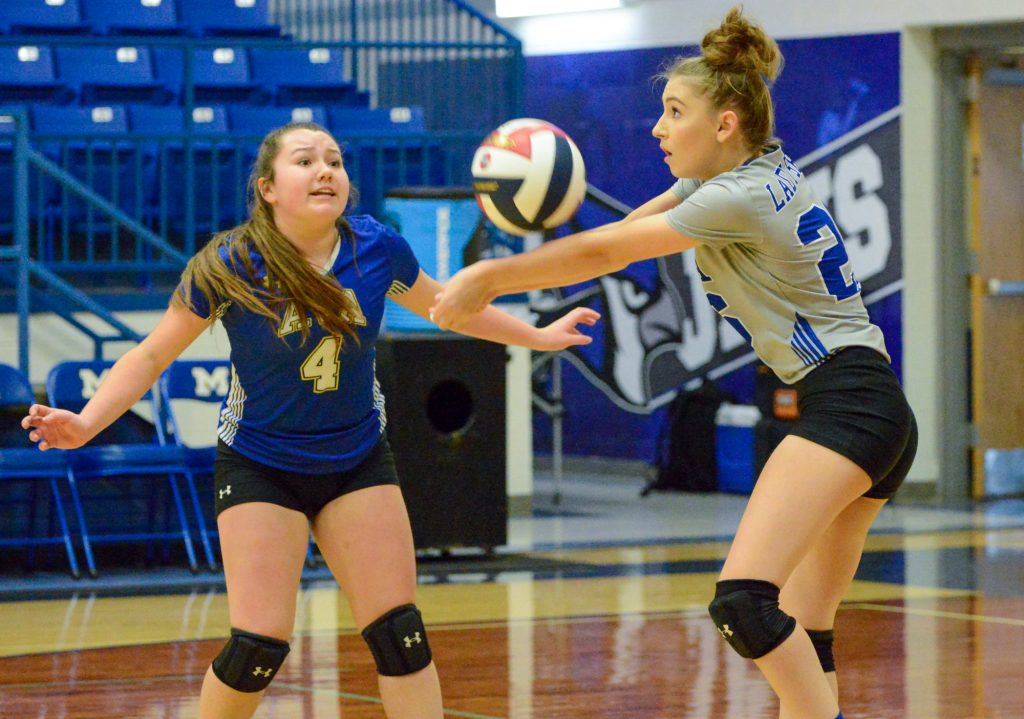 Another kill shot went long and out giving service back to Ava. With Ava down by two they needed a long rally to stay alive in the early minutes of the match. A line violation gave Ava a point but another big block came up for Willow Springs who regained service while leading 5-3.

Back-to-back aces from Emily Daniels and mistakes by Ava opened the lead to 9-4 before another kill shot went out of the boundary. Ava didn’t hold on to the rally after one point from a hit by senior Olivia Heriford, another missed dig maintaining a five-point lead for Willow Springs.

Ava trailed by five for a good portion of the set in spite of service aces by Heriford and mistakes by Willow Springs. Ava closed the gap to three thanks to a four-point rally. A lift call took away Ava’s momentum as the board read 19-17.

Dobbs ran over the net line to put Willow Springs into the final stretch which was worsened by missed shots and hits going out of the boundary from the Lady Bears. A late kill from Heriford would stop the advance at 23-18 but a cross-court bullet by Liz Sheehan placed Willow Springs at the set point. A serve from Sigman turned into the set-winning point when Ava failed to keep the ball inside the lines. 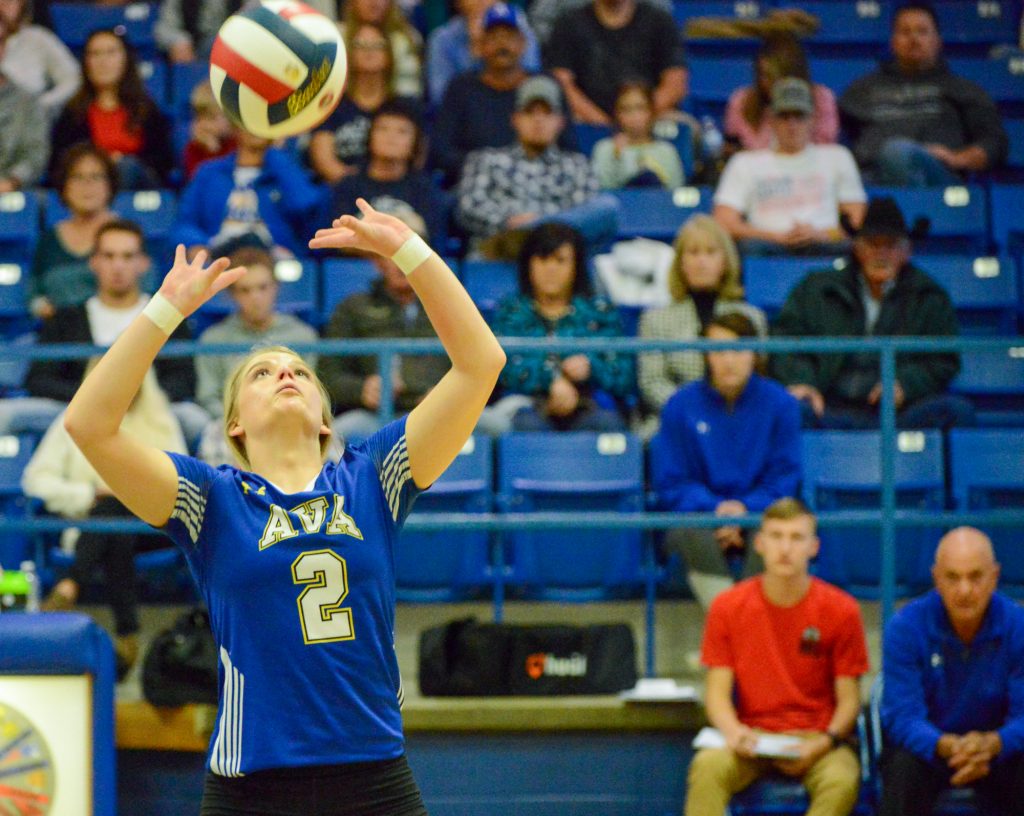 Ava HIgh School setter Sarah Dobbs (2) sets the ball during the first round of the MSHSAA Class 3 District 11 Tournament against Willow Springs on Monday, October 28, 2019, in Marshfield, Missouri. (Jason Hoekema/Herald)

The Lady Bears drew first blood in the second set from a tip of the ball by Fossett. A shot into the net on a kill attempt gave Ava an early 2-0 lead.

However, digs remained an issue for Ava against the hard-hitting opponent. Missed digs accounted for eight points given in the first set.

Ava caught a short break when a serve from Willow Springs found the back end of the court, ruled out at the line by a MSHSAA official.

But the service error bug moved to the other side of the court, Lauren Hall hitting into the net snubbing a chance for Ava to pull ahead. The set remained close and tied on several side-outs before the Lady Bears found a groove and four points from a tip by Taylor Ernst plus a kill and decisive block from Heriford.

A missed dig by Dobbs ended the breakaway on a hit from Willow Springs middle hitter Chyann Watts. Willow Springs quickly filled the point void and tied the set again, at 14.

The Lady Bears pulled ahead again, but Willow Springs was there to tie it back up until a breakdown in communications kept Ava an inch ahead, 22-21.

Willow Springs then gave up two points with an out-of-bounds hit by Courtney Ames and another return sent out to place Ava on the set point.

A short back-and-forth ensued until a smart tip Ernst picked up the set point to tie the match at 1-1.

Watts and Sigman continued to be an issue for the Lady Bear defense. The heavy-hitting duo were striking with great velocity causing the ball to ricochet uncontrollably by Lady Bears who went for the dig.

The lower energy level and lack of command also led to Ava finding themselves in a catch-up set when Willow Springs made a kill and also gained the go-ahead point from a two-hit penalty against Fossett at the net.

Kills from Heriford, Baylan Alexander, and a tip by Hall took back the lead into the middle of the third set.

Yet again, a missed dig gave up the rally which allowed Willow Springs to take off on a five-point rally to take the lead, 14-11, when coach Petty took a timeout for the Ava squad.

Ava was able to tie the set at 14 with a free point from an out-of-bounds hit from the Willow Springs offense, but Ava fell behind again with a quick three-point sway.

With the score at 17-15 and a penalty point from Willow Springs, Dobbs was able to fake the set and tip the ball over the net to tie the set at 17. Ava was behind by two when they took their second timeout of the set after they lost a rally with a kill from Sigman.

Willow Springs then took off into the endgame on a four-point rush mostly given up by a crumbling Ava team. Heriford shot a hit into the net and was blocked to push Willow Springs up, 22-18. A missed dig and a communications breakdown on who would hit the set ball accounted for the next two points which put Willow Springs at the match point.

“They were all over the floor” said Petty. “There were times I thought we were close to getting a point and someone is on the floor and just got it up. (Willow Springs is a) very athletic team. They worked very, very hard and got some shots up that were tremendous.”

Willow Springs dropped a return to give Ava one more point and a shot at a comeback but another missed dig when Hall and Downs collided after not calling the ball cost the Lady Bears the final point.

Aside from the missed digs which ate up the Lady Bears, Sigman and Watts were there to cause havoc with hard hits into an unprepared Ava defense. Willow Springs also picked up on the cross-court weakness of the Ava team, finding the gap near the net on the opposite side of the hit.

The world keeps turning, though. The Lady Bears returning next year already have a lot of work ahead of them in the postseason with changes in both the roster and how MSHSAA conducts matches in 2020.

The Lady Bears will lose height at the net and will also have to cope with exhaustion from a change in MSHSAA match rules.

According to Petty, MSHSAA will begin a best of five match setup next year. The change means a minimum of three games will be played and in some cases, matches could go up to five games resulting in late nights and a high demand for player endurance.

“The rule is (varsity games) will go to best three out of five” said Petty. “The best two out of three this year are that endurance game (next year).”

In the front row the Lady Bears are losing Heriford and Fossett. In their wake we could epect to see Baylan Alexander and Lauren Hall take a lead. Hall has played in each of the court positions this year and is “a tremendous athlete” according to Petty.

Fans can also expect now-junior Makynna Wallace to play up at the net as an offensive hitter. Sarah Dobbs will also return next year as a senior setter with leadership expectations placed on her after six seniors depart this year.