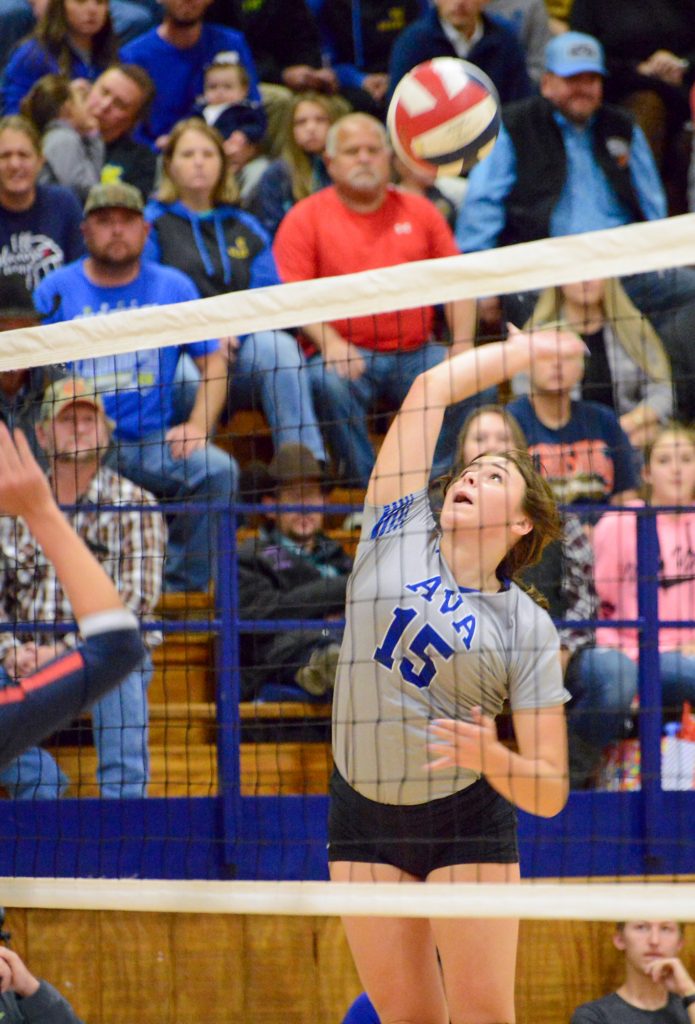 The Ava Lady Bears have had a winning season this year. It is one that has been nine years in the making as they hit a glass ceiling, and smashed it open.

In 2010, now coach Emily Petty was a senior at Ava High School and was part of a program which set a record that stuck around for nearly a decade.

That year the Ava Lady Bears finished 19-10-1, a season which Petty remembers well. Now as the head coach of a budding volleyball program, the young ladies she leads – including the six seniors which graduate this year – have reset history.

“I think (the new record) is sweeter as a coach,” said Petty. “I’m running six girls on the floor and 10 on the bench and watching them cheer for each other and have that commonality of working for each other and that sportsmanship. It feels great. I’m so happy for these girls. They’ve worked so hard in the past two years and we’ve come over mountains since the beginning of last season.”

In the SCA Conference, the Lady Bears finshed the year with a 6-1 record, with one loss from a 0-2 sweep by Cabool on October 17th.

The fanbase started Tuesday with a Senior Night Ceremony to honor six departing team members who will graduate in the spring.

Even with eight losses this year, not one occurred on the maple strips in the team’s home court inside the Ava High School gymnasium.

Fordland, Hollister, New Covenant, Mountain Grove, Willow Springs, Thayer and Liberty-Mountain View each fell to the aggressive and high-paced game the Lady Bears have grown into thanks to the leadership the team has found in Petty and assistant coach Shelby Tracy.

“I was really scared in that time,” said Sydney Snelson. “I am more aggressive going after the ball. But my sophomore year, I was not aggressive.”

“The difference (freshman to now) it’s unrecognizable,” said Herrera. “As a team we’ve grown as a group and as a player, I’ve progressed. I feel in my junior year (that) I really started growing. I feel that Coach Petty has done an amazing job pushing us to be the best we can.”

Tuesday’s game started with energy and ended with the same ecstatic screaming in the locker room fans experienced weeks ago.

The Lady Bears started the first set with a kill from sophomore offensive hitter Lauren Hall, a likely candidate to fill the gap left with Fosset and Heriford departing. The kill ended the Lady Eagles’ rally and opened the game 1-0.

For the most part, rallies were short with the Lady Bears being held to just three three-point sprints in the first set. A block by Fossett and Hall found the floor to make the score, 2-0 for Ava.

Missed digs were the bane of the Lady Bears’ service after five returns were missed.

The first set went in Ava’s favor with a four-point lead early on. Fumbling the ball between players, the Lady Bears allowed a six-point rally for the Lady Eagles taking the game to 10-8, Ava leading by just two.

At 12-11 for Ava, Amber Collins aced to tie the game up at 12 before the Lady Eagles took a late lead when Kaylee Downs missed a dig.

Liberty’s lead was temporary as Heriford served the ball and led on a three-point rally to go ahead of the Lady Eagles. A smart wrist-flick tip from Peyton Bush ended the Lady Bears’ service but Liberty wasn’t able to make up the difference through the end of the set that ended 25-20 with a tip of the ball from the Ava offense.

The Lady Bears took a decisive lead in the second set, breaking away by six at 11-5. The lead was from return mistakes which either went out of play or a kill attempt which went cross-court and was ruled out at the line.

Taylor Ernst earned a point with a set fake, tipping the ball into a gap in the Liberty defense to make the score 8-4 at the start of a four-point rally for the Lady Bears.

At 12-7 the Lady Bears lost a rally after a block attempt by Herrera and Heriford snuck through and down to the court. Heriford returned the favor with a kill to make the game 13-8.

Tips by Fossett and two kills from Hall pushed the Bears forward, but a kill from Lexi Shumpert and short rallies allowed the Lady Eagles to tie the game at 16.

A long rally by the Lady Bears with saves by Sarah Dobbs and Ernst plus blocks from Fossett ended with a missed dig by Downs.

In the end game, two kills from Heriford plus defensive mistakes by the Lady Eagles took the game to 22-20, Ava leading by just two points.

A missed dig by Hall closed the gap to one, but Hernst closed the rally with a short tip of the ball into Lady Eagle territory. Heriford served for the final two points of the game where poor communications helped the Lady Bears get to the game point.

On Heriford’s final serve on the home court, the Lady Eagles gave up the final point when a return was called in by a line judge sending the Lady Bears into celebratory screams as Ava volleyball program reached new heights as the program grows and plays the game on their own terms.

“We’re building a program and a tradition here,” said Petty. “We’d love for (new players) to join. This is the start of something good and we’re going to keep pushing. We work day-in-and-day-out. Last year were fundamentals. This year were really speeding up the game and playing a good pace.”

The six graduating seniors still have time on the court with District playoffs days away. The Lady Bears will face SCA rival Willow Springs in the first round, who took the Ava Lady Bears to three sets.

Ultimately, Ava prevailed 2-1 but that was in September. Teams grow and improve over time.

“The focus is to keep our mentality, the positivity, the sportsmanship and the passion we show towards each other,” said Petty. We go out and we have each other’s back no matter where that ball is. So we’re keeping that quick-pace momentum going into next week because we’re going to have some heavy hitters in that district. A few games ago we switched up our rotation when we went to battle with Cabool and it’s been working wonders for us. So that’s kind of a feather in our hat that they haven’t seen. And if they’re running the same rotation, I have film on that and I know what to work for.”

Teams build special relationships between individuals, bridging differences and creating lasting friendships with people they know they can trust. The comradery will be what is missed most for departing players.

“When Coach Petty and Coach Tracy came in, we just took so many big steps,” said Heriford. “It was it was incredible because they’ve made us into the players that we are today, and they helped us have this good season. I mean, we’ve done so much better in the past couple of years and it’s really amazing how much better we’ve gotten as a team. It’s sad that it’s over, but I’m really glad that we get to end on such a great season.”

“Tonight, we’ve all tried our hardest,” said Snelson. “We gave it our all and I think we came together even like when we weren’t great early in the year.”

“I’m going to miss being on the team and just being able to rely on everybody as a whole,” said Herrera. “The communication and feeling of being on the court. It’s just a different, it’s indescribable.”

The Lady Bears will face Willow Springs on October 28 at 4:30 p.m. in the Class 3 District 11 Tournament. With a win they will face number one seed Logan-Rogersville on the 29th again at 4:30 P.M. The tournament is held at Marshfield High School.

If the Lady Bears defeat Rogersville, they will likely face Springfield Catholic or Marshfield, the district’s three and two seed, respectively. That championship match will take place on the 29th  at 7:30 P.M. 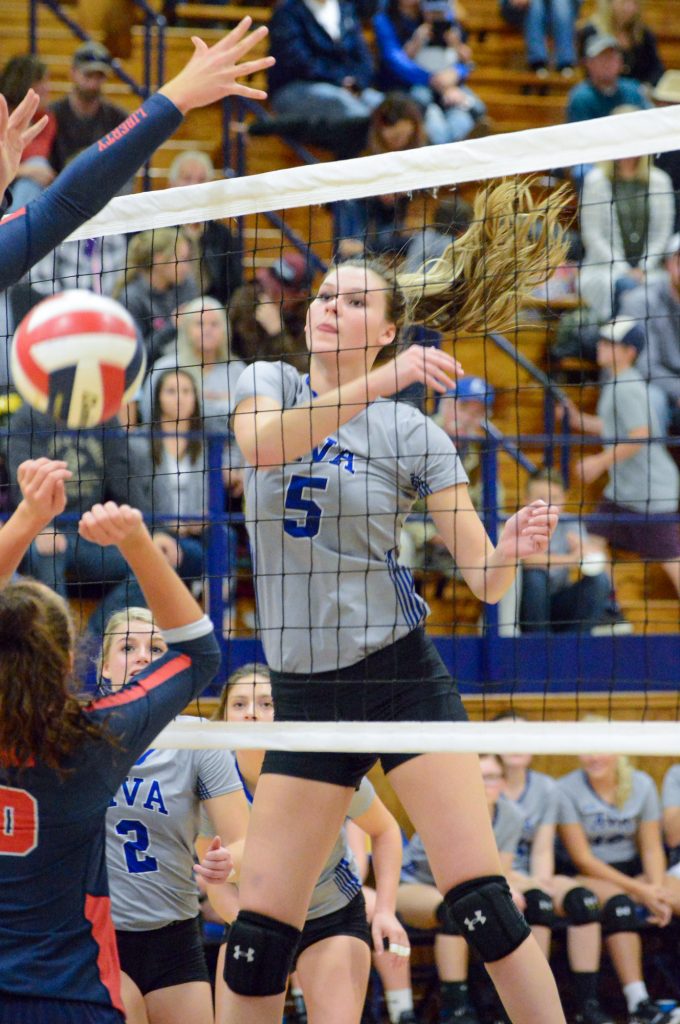 Ava High School senior Olivia Herifird (5) watches a ball she hit over the net during the season’s final game against Liberty-Mountain View on Tuesday, October 22, 2019, in Ava. (Jason Hoekema/Herald) 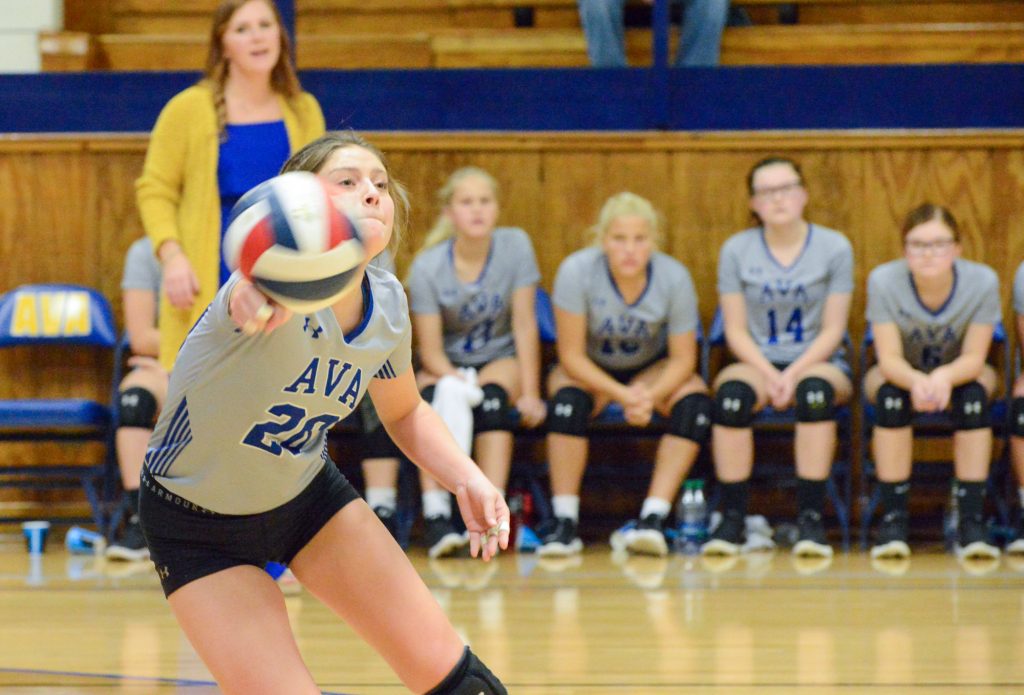