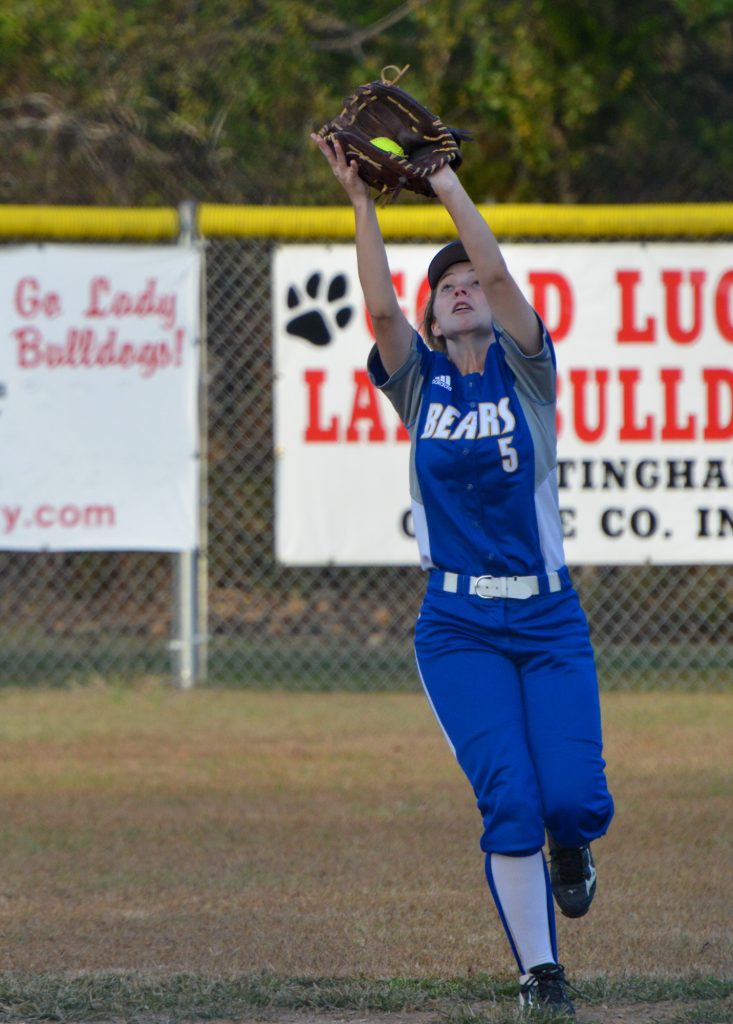 Ava High School outfielder Makayla Miller (5) makes a catch on a fly ball for the second out in the bottom of the sixth inning against Gainesville on Monday, October 14, 2019, in Gainesville, Missouri. (Jason Hoekema/Herald)

The Lady Bears have done well this year without ace pitcher Julia Henry. Freshman Sarah Mendel was thrown into the one slot and had to step up her performance quickly as well as work with her defense to keep Ava afloat.

The only District opponent to come near the Lady Bears were the Hartville Lady Eagles who lost by two runs on September 25. Beyond them, Ava hasn’t had a margin smaller than seven runs ahead of their opponent.

With the number one seed in the District in the bag for Rex Sawyer and his young team, they drove south Highway 5 to Gainesville for their second bout of the season.

Last time the Lady Bears and Bulldogs met in regular season play was on September 3, where Ava ran ahead by 10 to bag their first season win. The Lady Bears did falter once to Gainesville in tournament play, a 10-8 loss at Bakersfield.

The Lady Bears started the first without a hit or run but managed to put two on by means of walks from Lady Bulldog pitcher Erin Mckinzie. The Lady Bears were able run-up the pitch count, looking at 22 pitches over five batters.

Macee Cutbirth grounded to Mckinzie and was thrown out at first to end the Lady Bears’ first attempt at offense.

Sarah Mendel has grown as a pitcher and leader in the one slot, earning three strikeouts Monday. Two of those came in fourth pitch Ks of the Gainesville one and two batters. Olivia Gastineau cleaned up the third with a 6-3 play.

Not a single batter walked on her watch in the circle on Monday, a major accomplishment for the freshman ace. 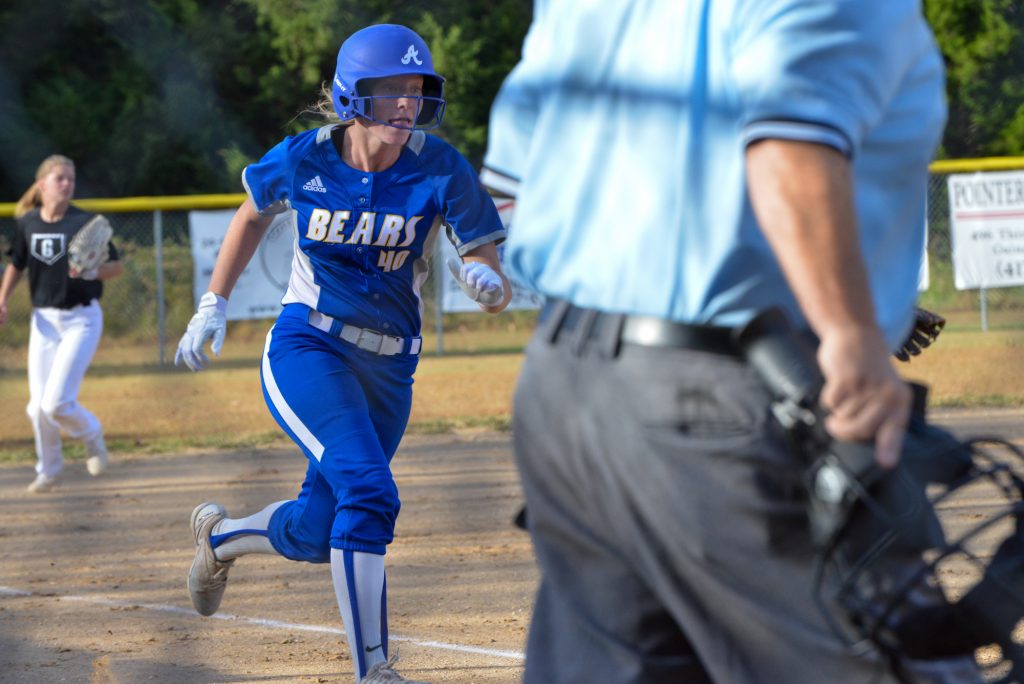 Keeley Akers (40) charges to home plate of the first run of a softball game against Gainesville High School on Monday, October 14, 2019, in Gainesville, Missouri. (Jason Hoekema/Herald)

A quality-at-bat showed in the top of the second with Keeley Akers running-up seven pitches and walking to first. Makayla Miller came through in the seven spot of the order with a bunt that moved Akers to third.

Miller has gone through her senior season with a relative quietness, but she serves an important role in her position as the seventh batter and as a right fielder.

When batters push the ball or lefties pull to her spot, she has put out batters with routine flies and moved runners which led to several runs this season. It’s an important role which is not always seen when putting season numbers together.

She was retired as the first out in the top of the third and fifth with bunts, a small-ball favorite of coach Rex Sawyer. In both bunts, Akers scored a run with Miller picking up one RBI in the fifth.

“She did a good job getting the ball down and moving the runners into scoring position,” said Sawyer. “That’s what you got to do in this game and then (the runners) try to score on a passed ball… you can score a lot of different ways. That’s huge in softball.”

Mendel earned an RBI bringing-in Akers in the second, but Devin Rowe – who reached on a double to the left field fence – was stranded by a 6-3 play on Olivia Gastineau.

Gainesville tied the game up at the bottom of the second after Jessee Latham reached on an error by Ava third baseman, Akers.

In the outfield Regan Koop snagged a fly ball on the run for the first out while the infield retired two more, stranding one Lady Bulldog at second.

Bats started talking more in the top of the third, Koop and Heinlein scoring to put the Lady Bears up, 3-1.

The inning started with Lexie Gastineau singling and stealing second. Koop walked as did Heinlein, juicing the bases.

Macee Cutbirth made first on a fielder’s choice to home, putting Lexie out but kept bases loaded for a walk and a hit-by-pitch for two runs.

The Lady Bears managed five runs in the fifth inning after stranding one in the fourth.

The inning started with Cutbirth reaching on a single to left field and Akers following to first on an error by Hailee Donley.

Miller played her role well, bunting the small-ball play to advance Cutbirth and Akers who scored with a two-RBI double by Rowe.

The first dinger of the season came off the bat of Olivia Gastineau, a non-stop fly over the left field fence. Lexie followed and reached on a walk and a steal to second. A liner to right field from Koop allowed Lexie to spin her wheels and reach home.

Lexie had come up clutch twice on Monday, first with a diving catch in centerfield to pump up the Ava dugout with excitement which may have sparked the big lead in the fifth.

Cutbirth singled in her fourth appearance, reaching three of five times with two runs on Monday. Miller came up again and flied-out to left field, a perfect spot for the ball because Cutbirth had advanced to second on a passed ball.

Wheels going, Miller picked up her second RBI in spite of being retired three times.

Passed balls by Gainesville catcher Jessee Latham, five total, burned the Lady Bulldogs with Olivia Gastineau circling bases scoring on one of those missed pitches. Two fly-outs by Heinlein and Cutbirth eneded the game, stranding two, but the Lady Bears were ahead 10-3 at the end of seven. 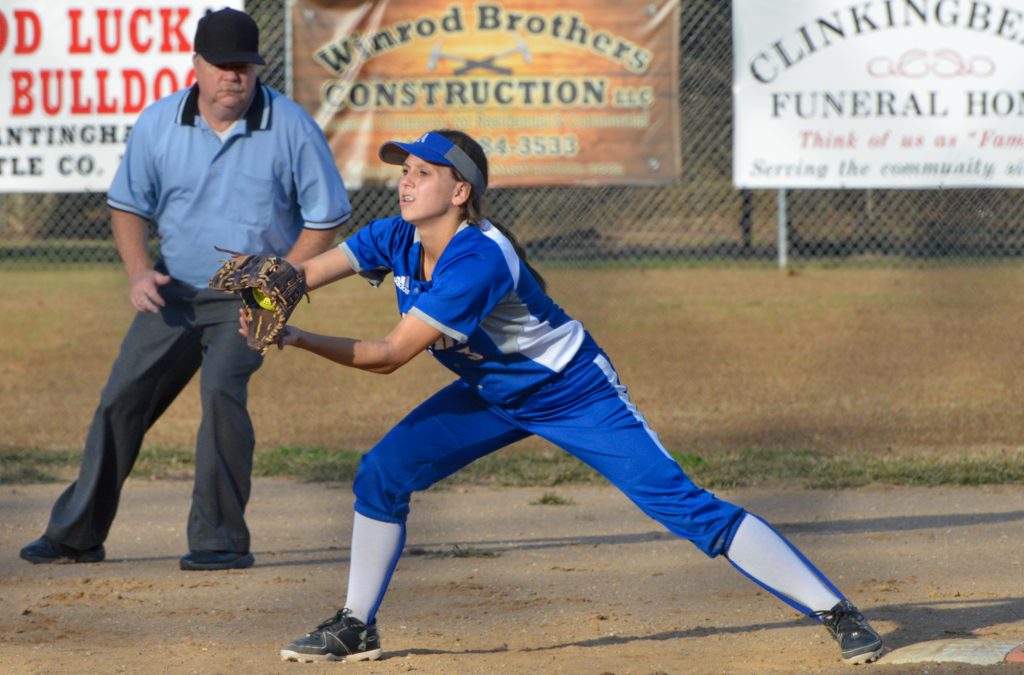 Ava High School first baseman Teagan Snow (3) makes the catch on a 6-3 play to close out the first inning of a softball game against Gainesville on Monday, October 14, 2019, in Gainesville, Missouri. (Jason Hoekema/Herald) 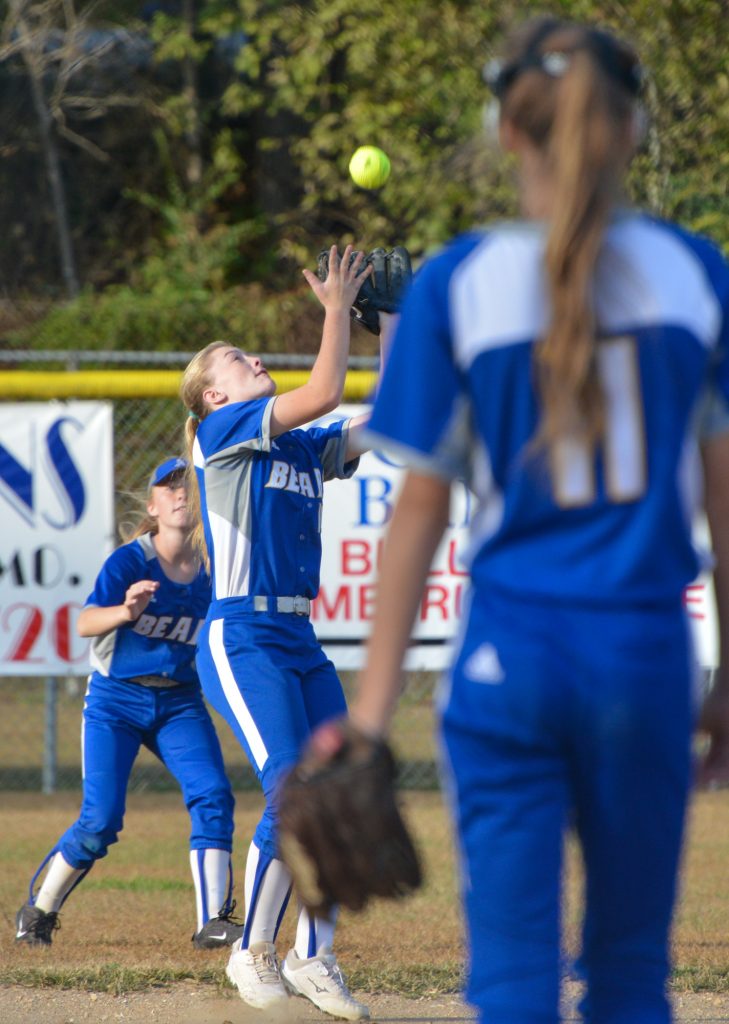