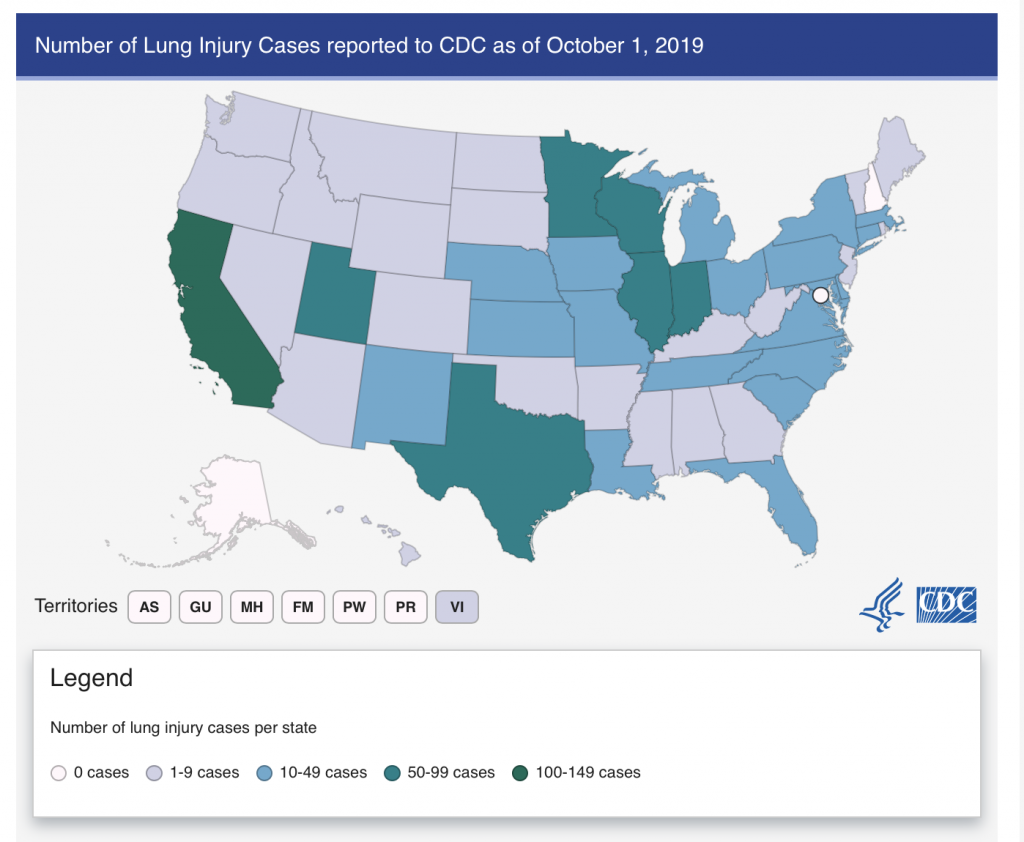 As deaths and lung injuries associated with e-cigarettes continue to be reported, Frank Leone of the Perelman School of Medicine sheds light on the risks.

It’s an increasingly common sight around the nation: A person lifts a device to their mouth, and suddenly their head appears engulfed in a vapor cloud.

Electronic cigarettes, which give rise to those drifts of fleeting, smokeless vapors, have exploded in popularity, introduced to the market in the early 2000s. A 2017 survey by the United States Centers for Disease Control and Prevention (CDC) indicated that 7 million U.S. adults used e-cigarettes, but the practice is growing fastest among young people. A survey from 2018 found that 37% of 12th graders had reported using the products in the past year. This rise comes as rates of cigarette smoking among young people have fallen significantly in recent years.

Makers of electronic cigarettes have billed them as a safer alternative to cigarettes. But with eight deaths and more than 500 instances of lung injury now linked to their use, the products are under scrutiny from the public as well as the CDC and U.S. Food and Drug Administration (FDA).

“The public health community used to feel that tobacco equals death, and it followed that not-tobacco equals not-death,” says Frank Leone, director of Penn’s Comprehensive Smoking Treatment Program and a pulmonologist at the Perelman School of Medicine. “Now that calculus is changing. People are starting to recognize that, sure, cigarette smoking has its risk profile, but electronic cigarettes have their own risk profile.”

Electronic cigarettes, or e-cigarettes, are hand-held, battery-powered devices. Unlike cigarettes, they do not burn tobacco but rather contain a heating element that aerosolizes a nicotine-containing solution into a vapor, which users then inhale.

At Penn, physicians and other health workers have been seeing the nationwide trends in e-cigarette use reflected in the student population. Leone points to a recent survey, conducted by the Student Health Service, that suggested that undergraduates who began using the devices on campus were well informed about the dangers of smoking.

“These are people who have gotten the message that cigarettes are gross,” says Leone. “They don’t want to smoke. But they don’t think of this as smoking.”

According to the survey and Leone’s experience, students don’t necessarily even consider their habit as vaping. “They think of it as ‘Juuling,’” he says, referring to the maker of sleek e-cigarettes that can be charged in USB ports and have commandeered roughly a third of the market.

Juul and similar companies claim their devices are intended to help adult cigarette users quit. Yet aspects of the products make them appealing to use, particularly for younger people. For one, they use a single type of nicotine salt, nicotine benzoate, which is tasteless and doesn’t elicit a caustic sensation when it hits the back of the throat, as many other types of naturally occurring nicotine salts do. Nicotine benzoate is also able to quickly traverse the blood-brain barrier, making it “precisely the right product for a young person to get maximum impact with minimum aversive sensations,” Leone says.

What’s more, their cartridges come in a variety of appealing flavors.

“Out of one side of their mouth Juul is all about helping adults have a choice,” says Leone, “and out the other side they’re selling mango- and crème brûlée- and strawberry shortcake-flavored solutions.”

This facet of products of Juul and other manufacturers  has led the FDA to consider a ban on flavored nicotine products, which seem to target young—even underage—users.

Leone notes that the flavors may also enhance the irresistible pull of the products on a biological level.

“Nicotine hooks itself onto sensory inputs to create its addictive potential,” Leone says. “So it turns out that adding specific flavors to nicotine products enhances the nicotine’s reinforcing capacity.”

Perhaps in part for these reasons, while some individuals say e-cigarettes helped them quit smoking, Leone says researchers have not been able to reproduce those successes. Some evidence even suggests that e-cigarette use can actually impede smoking-cessation efforts.

What’s clear is that vaping can cause harm and that the people who have died or experienced serious lung injuries from using e-cigarettes don’t fit into a single bucket, says Leone: They have used different products for different lengths of time in different ways. This makes it hard to point a finger at one chemical, or one product, to blame. Rather, it suggests that the act of vaping itself is the problem.

“There’s this false calculus that e-cigarettes have to be less harmful than cigarettes,” he says. “They are harmful, period. You just can’t mess with the lungs in any old way you want to and expect to get away with it.”

As a part of promoting the safety and health of the whole community, Penn’s Tobacco-Free Campus designation extends to electronic cigarette use. For students, staff, and faculty who want to stop using e-cigarettes, a variety of wellness resources are available. These programs rely on an incentivizing approach to quitting, focused on positively reinforcing healthy behaviors instead of eliciting a sense of fear or shame around them.

Leone recommends reaching out to a primary care doctor or contacting a Comprehensive Smoking Cessation Treatment Program for information about additional tools.