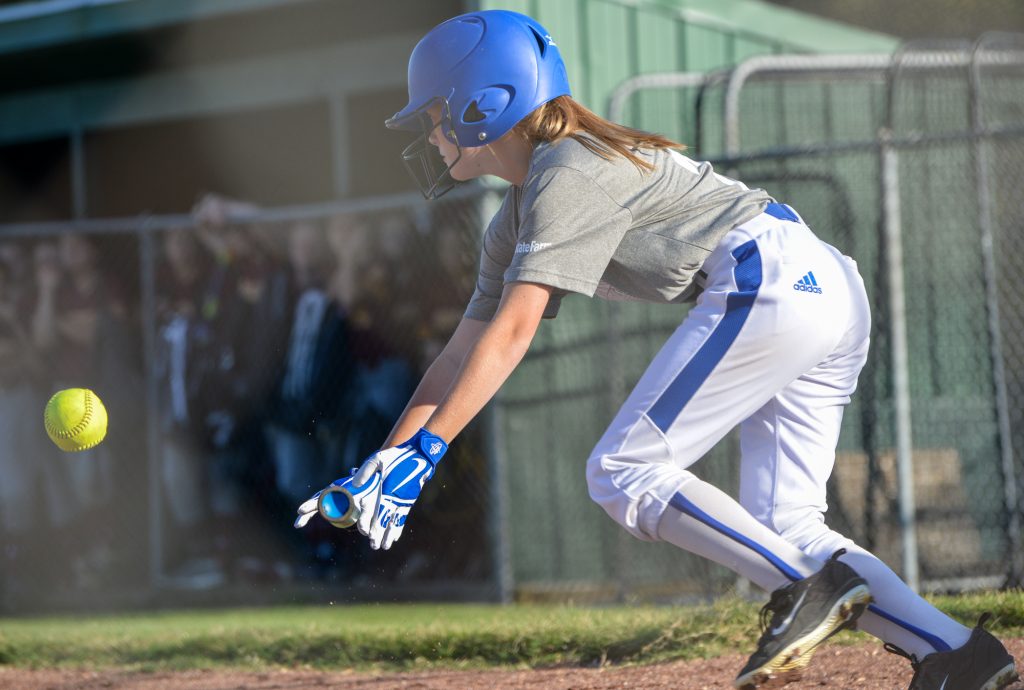 Number two batter Lexie Gastineau (13) bunts the ball to move Olivia Gastineau forward to second base in the bottom of the first inning of a game against Mansfield High School on Tuesday, October 8, 2019, in Ava, Missouri. (Jason Hoekema/Herald)

After solid wins over Seymour and Lebanon, the Lady Bears got stuck with a loss from the Alton Lady Comets last week. The Comets, which should have been the third in a should-be five-win streak, wound-up a 6-2 loss for Lady Bears.

Ava picked up the pace compared to their sluggish appearance against Alton and ran Mansfield down in a three-inning, 15-0 blowout at home.

The game started with Mendel allowing a single to Mansfield leadoff batter Hailey Nelson whose wheels put her on third in as many pitches to Gracie Williams.

Williams took a quality-at-bat from Mendel, running up the full count on the seventh look but Mendel managed one inside the zone for her first strikeout of the game. She followed up with two strikes to Madalyn Ivy.

On the third look Ivy made contact and sent it into shallow left field for out number two, forcing Nelson to tag up.

A quick-thinking throw by Reagan Koop to catcher Miquia Heinlein caught Nelson at the plate for an outfield-infield, 7-2 double play.

The Lady Bears also went scoreless in the first but managed to get two on in four plate appearances. Olivia Gastineau, who was 4 for 4 on the afternoon, found the gap in shallow right for a single. Lexie followed up with some small ball, a favorite of coach Rex Sawyer, with a sac bunt to push Olivia to second.

Koop sent one to Mansfield shortstop Logan Jones who committed an error allowing Koop to reach while Olivia attempted the aggressive charge at home, but was tagged for out two. Koop was tagged on her way to second off a hit from Heinlein to close the first.

Mendel, who has been thrust into an ace position after Julia Henry was ruled out for the season, walked her first batter and ran her second to a full count in the top of the second.

She delivered for a swinging strike three, putting away her second hitter without the rest of the defense. The battery worked for the second out, a pop-up caught by Heinlein. A grounder 4-3 put the number seven batter, Macie Tate, out with a blank board going into the bottom of the second.

Macee Cutbirth took a hit to the thigh for a walk to start the Ava offense, Mansfield’s first mistake.

Keeley Akers ran up the pitch count, walking on the 3-2. A second mistake. Makayla Miller loaded the bases after wearing a pitch, putting the weight on Mendel.

A hit and a fielder’s choice landed Mendel on first and brought-in Cutbirth for the RBI. Devin Rowe earned an RBI of her own with the distraction of a ground 4-3 for out number two.

Lexie Gastinueau ended the second with a called third strike, but the damage had been done by giving Ava momentum after a solid 17-9 win over Willow Springs on Monday.

Into the top of the third, Logan Jones reached first with a shallow hit that hit the grass. Mendel kept her game going from the circle with her third strike out of the game.

Ashlynn Heil swung on the second look, popping straight up and into Heinlein’s glove just outside the left-handed batter’s box. One and two outs thanks to the Ava battery.

Adding to their errors, Logan Jones was called out for leaving first before the pitch was released for out number two and Nelson ran into Cutbirth resulting in a runner’s interference call from the field umpire.

At this point, Mansfield would have probably never wanted to know that it was their last turn at-bat.

“They’re a good ballclub,” said Sawyer. “We just took advantage of it and hit the ball for a change. When we hit the ball we can make things happen. Got a bunt down when we needed to move people, even when they knew it.”

The bottom of the third went as-if Heinlein had secretly snuck a revolving door on home plate while she was on defense.

That was a running joke.

Puns aside, the Lady Bears started the bottom of the third with a walk for Koop and Heinlein reaching on an error by Mansfield’s pitcher, Meagan Langley.

Cutbirth landed on first for her second time in three innings but was picked off on her way to second on the fielder’s choice toss during Akers’ at-bat for an RBI.

Bases juiced; Miller hit an RBI-single for the Lady Bears’ third run from Koop. Mendel followed in the same fashion with a drive that fell inches inside the foul line for an RBI-single which brought-in courtesy runner McKinley Goss, Ava’s fourth run.

A passed ball advances Koop to third, Goss to second.

Cutbirth grounds out but brings in Koop and Goss scores on a passed ball. 12-0.

Akers singles, her third reach of the afternoon.

Lexie Gastineau hits a routine ground ball right to Logan Jones who can’t figure out where to send it, standing with the ball in her throwing hand.

“When you’re moving runners and they’re making mistakes, they got down on themselves a little bit,” said Sawyer. “Our girls just stepped up and played the game today.”

A feel-good win could not have happened on a more feel-good day. Today was the 9th Annual Hospice Awareness game where they raised money for the Hospice Compassus Foundation.

The organization aims to preserve dignity and self-respect for those who have reached their final days by providing care and medical supplies to ensure a pain-free departure surrounded by their loved ones.

The money raised Tuesday goes directly to the foundation to help with costs not covered by Medicare, Medicaid or private insurance.

With minds on the game and their hearts full the Lady Bears move on, 12-8 this season, facing Walnut Grove yesterday and will play Bakersfield this afternoon.

The public is invited to attend Thursday’s game as it is senior night for the Lady Bears. The celebration will be held prior to the game’s scheduled 4:30 P.M. start at the Ava Sports Complex. 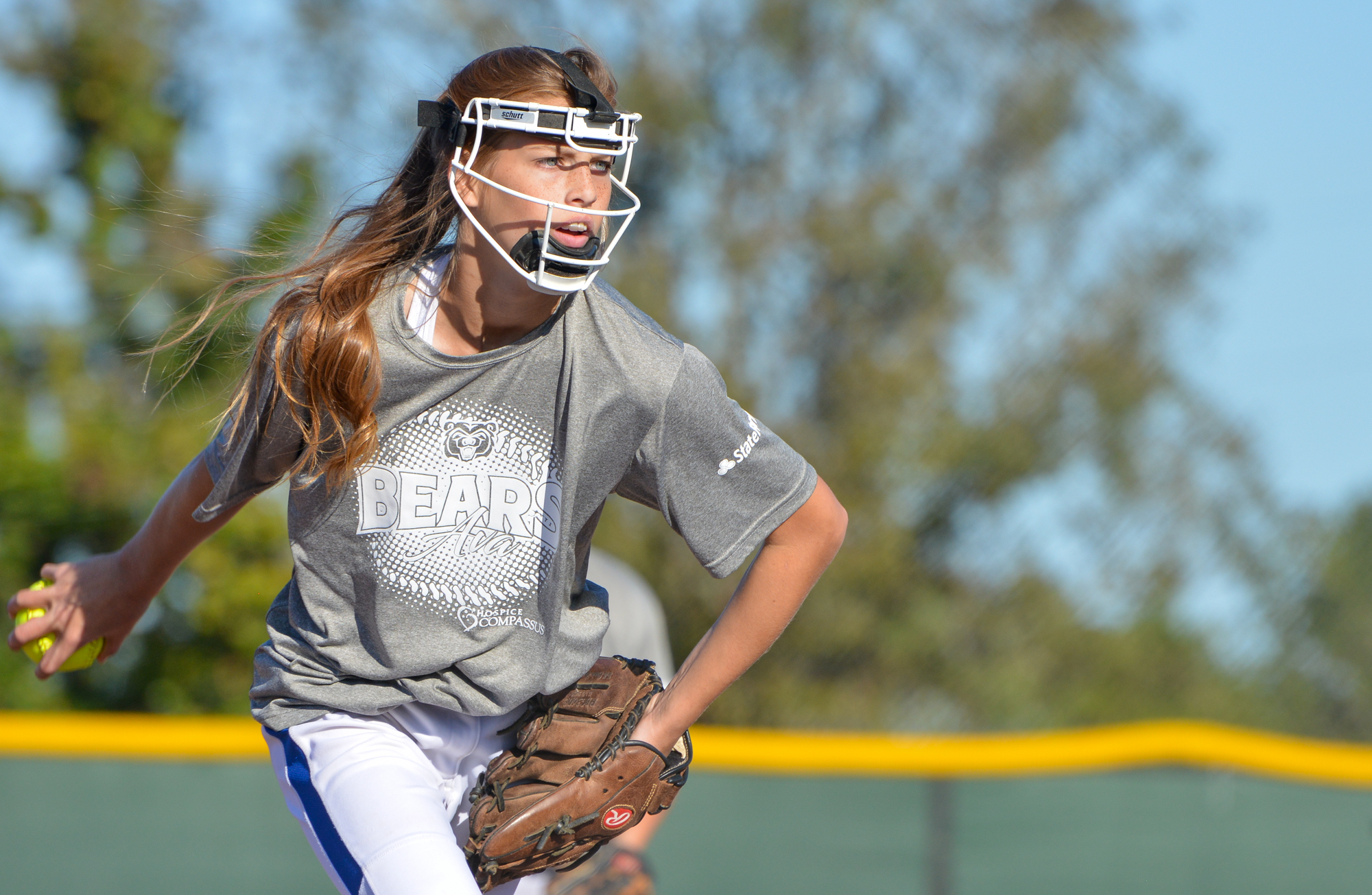