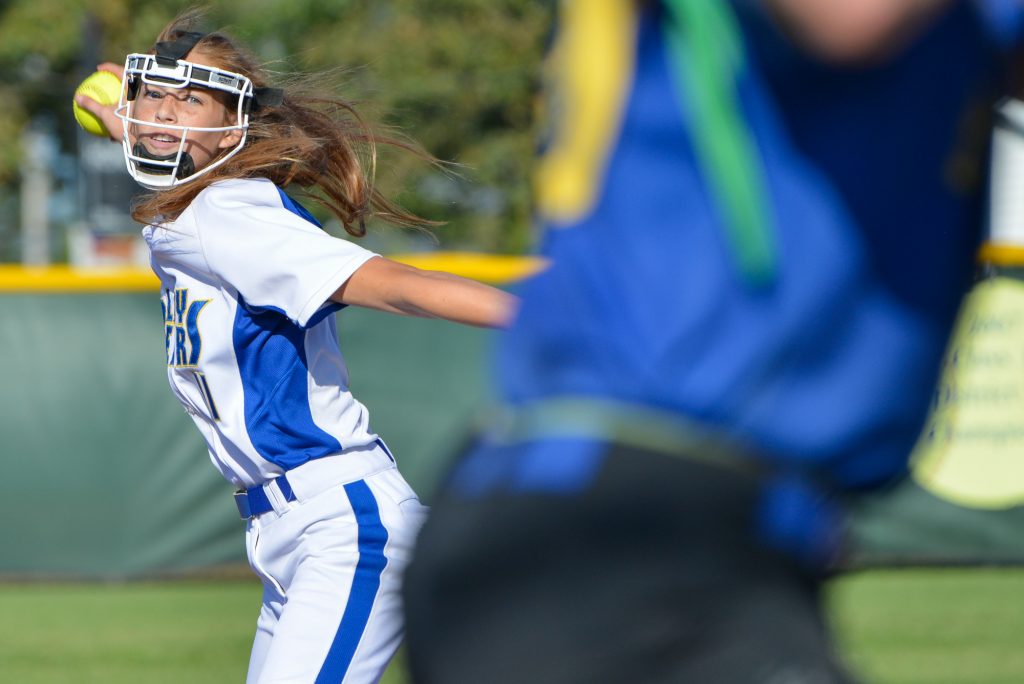 Ava High School freshman pitcher Sarah Mendel (11) winds up a pitch for Alton catcher Laiken Heck during the top of the first inning of a non-conference, non-district game on Thursday, October 3, 2019, in Ava, Missouri. (Jason Hoekema/Herald)

In the sports of baseball and softball it can be easy to succumb to your own mind. It happens at all levels of play, too. The Lady Bears played themselves out to a 6-2 loss, putting their record at 10-8.

Charlie Morton, a former Astro and now an Ace for the Tampa Bay Rays, started the game against Oakland in the American League Wild Card Game struggling to find his curveball, but Morton worked through it and threw some filth for five innings.

This isn’t the first meeting of the two teams, though. The Lady Bears dominated the Lady Comets 18-3 at the Bakersfield Tournament on September 21.

Alton started off behind the plate and freshman pitcher Sarah Mendel threw two strikes before Hanna Wigger sent one into left field, flying out to Regan Koop.

With one away the Ava defense was expected to come up with two more, but Laiken Heck grounded one past second for a base hit starting off a jittery first inning for the Lady Bears.

Whether the Ava Lady Bears got into their own minds or were still flattened from the loss in Lebanon is up for question. However, one thing was certain. There was no energy on the field coming from the Lady Bears

“We made too many mistakes, errors, and mental mistakes,” said Sawyer. We can’t win ballgames like that. You name it, we did it today. We were never in the ballgame and we were never focused.

The woes continued with back-to-back errors made by Olivia Gastineau and Mendel. Gastineau fumbled a routine grounder which should have been the inning’s second out. Instead the missed opportunity advanced Heck to second and put Madi Erickson on first.

Mendel faced a similar situation with a poorly hit ball that stayed fair and rolled toward the circle. A quick reaction and fielding of the ball could have been a third out, but now the Lady Comets had juiced the bases.

Alton’s first run was made on a hit-by-pitch to Kaylee Mock, Heck scoring. Then again with Courtney Sharp wearing a pitch, pushing Erickson to home.

The Lady Bears needed a spark, anything to end their turn at defense. That break came with Christine Kemper making a routine fly-out to Ava right fielder Makayla Miller.

Sharp had over-advanced to second and stutter-stepped trying to decide where to go. A quick throw from Miller in the outfield to Teagan Snow at first made the odd, but needed, 9-3 double play.

Two-in, the Lady Bears had time to make-up the difference on offense. Coach Sawyer could be heard motivating the young ladies, telling them that the game was still winnable.

Ava leadoff batter Olivia Gastineau singled on the 1-1 pitch with a sinker into the gap behind second, advancing to bag number two while Lexi Gastineau grounded-out at first.

Olivia set up camp on second, where she would be stranded with a whiff on the 2-2 pitch to Regan Koop and a 5-3 ground out on the first look to Miquia Heinlein.

Heinlein’s batting has improved, and she continued to place power behind the ball in her three at-bats. In the bottom of the third she smashed the ball high and into left field. The power appeared to be there, but the arc put the ball right into the glove of Katie Ruddy.

In the bottom of the fifth she again destroyed a ball which arced high and into centerfield for a routine out.

Going back to the bottom of the second, the Lady Bears’ five-through-eight were retired in order after the Lady Comets tacked a third run onto the board.

In the bottom of the third the Ava order put six batters in the box making just one hit but were only able to bring in Devin Rowe, who reached on ball four. With the lone run, the Lady Bears could not answer for the two they allowed at the top of the inning.

Opportunity presented itself again after the Lady Bear defense stranded one and allowed one run before heading into the bottom of the fourth. Another six batters set foot in the box, but weak hits to the infield put two away, the Lady Bears stranding two with a whiff by Rowe.

“We didn’t hit the ball at all,” said Sawyer. “There was no energy whatsoever. We came off a big win at Lebanon and then we just let down, deflated after that.”

Hope came alive again in the fifth when Koop destroyed a ball into deep right centerfield. As the Alton defense sprinted to the ball while it rolled all the way to the chain-link, Koop delivered a triple to boost spirits in a 6-1 deficit.

“You have to start out playing early,” said Sawyer. “That’s all there is to it. If you play early, well you’ll keep playing.

Heinlein followed with a solid hit, as she has lately, but the ball’s departure angle was too steep to reach the fence, stranding Koop on out three.

Bottom of the sixth and the Lady Bears made another six appearances but scored just one run by Macee Cutbirth who reached on a walk and was batted-in by Mendel.

The rest, as they say, is History after Koop was left at second in the bottom of the seventh.

Three errors that afternoon, two in the top of the first alone, set a foul tone for the Lady Bears that carried through seven innings.

“Bakersfield is coming up here for our senior night,” said Sawyer. So, we just got to put it back together, figure it out, and go back to work.”