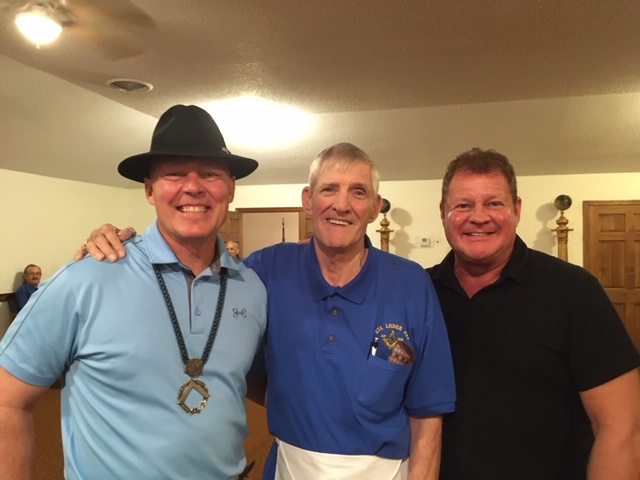 RWB Carter, WM, presented RWB Orvil Loge and Son Bill Loge endowed memberships.  The memberships were for Orvil, Bill, his son, and for Connor, RWB Orvil Loge’s grandson.  This was done before the degree work began.

Brother Williams, secretary, stood and read the previous minutes and they were approved as read.  A petition was read for the second time and, with the favorable report from the committee of investigation, balloting then took place. The candidate was elected to become a member of our lodge and his First Degree was then immediately conferred by RWB Carter, WM.  The SW, WB Stewart, was asked if he had any further business for our lodge of Entered Apprentices.  He stood and announced the candidate and, no objection being heard, RWB Carter proceeded to confer the degree.

WB Byron Clark gave the lecture and RWB David Norman gave the charge. This completed the degree and the candidate was seated with the brethren for the remainder of our business.

Tom Williams, secretary, stood and read a new petition and, no objection being heard, a committee of investigation was appointed.  Darren Young, Chairman, RWB Craig Carter, and WB Billy Steward were appointed as the investigative committee and will report prior to our next regular stated meeting.

RWB David Norman, treasurer, stood and gave the financial  report and also informed the lodge that he and WB Stewart had ordered signs to be posted on our driveways informing people that our driveways were private and not public.  Also, he thought a lodge proposal would be finalized to present to the lodge by our next regular meeting regarding a permanent lodge sign for the back along Broadway Avenue.  RWB Carter, WM announced that next meeting would be a fish fry with WB Stewart and RWB Carter providing the cookers. However, neither brother volunteered to do the cooking.  Our next meeting will also include the conferring of a Second Degree.

Brother Dwight Heath has passed away and the family has requested a Masonic Funeral.  It will be at Clinkingbeard Funeral Home on October 3, 2019 beginning at 2:00 PM.  White aprons will be at the funeral home.

Brethren Young and Steward suggested that we raffel a hog.  We will raffel one-half of the hog and the remainder will be given to the Wright County Children’s Home in Norwood.  A motion to proceed with the raffle was made by Tom Williams, seconded by WB Baker and the motion passed,  We will be selling cards at $10.00 dollars each or three for $25.00 dollars.  This should be a good fund raiser for us and an opportunity for us to benefit the Children’s Home at the same time.  A good project.  The hog will be purchased from Gibsons in Seymour, Missouri.

Ava Lodge #26 had the district ‘Traveling Gavel’ but Mansfield Lodge #543 took it away with at least four members visiting.  RWB Carter presented the gavel to WB Byron Clark.

WB Stewart, SW is the Master at Robert Burns Lodge in Gainesville and he announced that their lodge would have an Arkansas Degree done in their lodge on October 5, 2019. They received a special dispensation and lodge will open and close with Missouri ritual but the degree will be done by a crew from from Arkansas.  All Masons are invited.  They will also be conferring a First Degree on October 17, 2019 and will host a School of Instruction on October 29, 2019.

Mansfield Lodge #543 will be conferring a Third Degree at their regular meeting on October 8, 2019 and will also install new officers.  They will be having an official visit by our new DDGM, RWB Rick Thompson. Henderson Lodge is hosting a Scottish Rite Family night on October 5, 2019 as well as con-ferring a Third Degree on October 17, 2019. Hazelwood Lodge #459 will be doing degree work on Fri-day October 4, 2019.

RWB Rick Thompson, DDGM for the 35th Masonic District of Missouri was present for his official visit.  His message from our Grand Master was that we are all challenged to recruit at least two new members for the upcoming year. We should also remember that we should at ALL TIMES represent the tools of masonry that are symbolized in our degree work. These tools should guide us in our daily life as we live and travel though our communities.

This was an excellent meeting with great attendance, lots of members, many visitors, and the Grand Lodge representatives, DDGL and DDGM present. No further business appearing, lodge was closed in due form, peace and harmony prevailing.