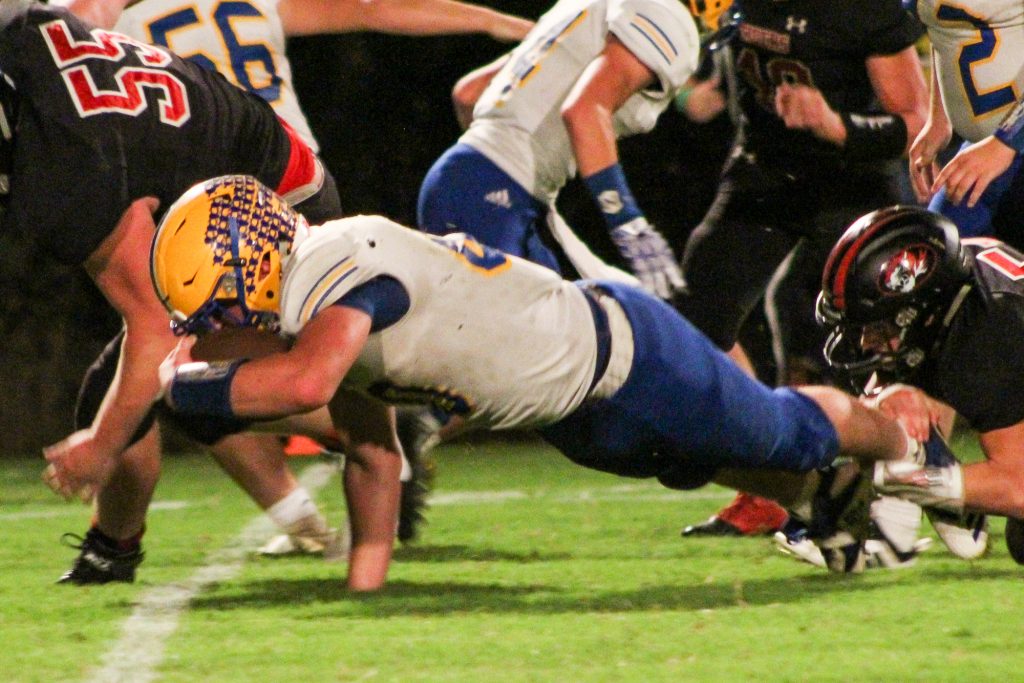 Ava senior running back Kayden Myers (40) lunges forward over the 20-yardline during the first half of an SCA Conference, Class 2, District 3 game against the Tigers on Friday, October 4, 2019, in Houston, Missouri. (Kayla Dry/Special to the Herald)

HOUSTON – Marching onward with their perfect season at 6-0, the Bears have not yet met a foe they could not defeat.

However, in the realm of Ozarks high school football, another juggernaut has been barreling towards Harlan Stadium with their own perfect record.

Tomorrow both the Bears and Bobcats have their date with destiny in a winner-takes-all South Central Association Conference showdown.

I wish it wasn’t but I know when I say that it’ll be varsity versus varsity (the whole game),” said coach Dan Swofford. “It’ll be a slugger in there. They got some guys that are good football players, they’re undefeated, and they’re hungry.”

With the latest Missouri State High School Activities Association information, the Ava Bear still come up short against the Bobcats. Ava has scored an average of 37.7 points per game (ppg) while Thayer has delivered a slightly higher 39.5 ppg.

On defense, Ava has allowed more points with an average of 17.7 ppg while Thayer’s defense has only allowed 8.5 ppg this year. These are two different schedules of play, though.

Ava has played two larger and tougher schools between Buffalo and Hallsville with two wins. Meanwhile, the Bobcats most difficult opponent has been Hayti (5-1), a Class 1 school. 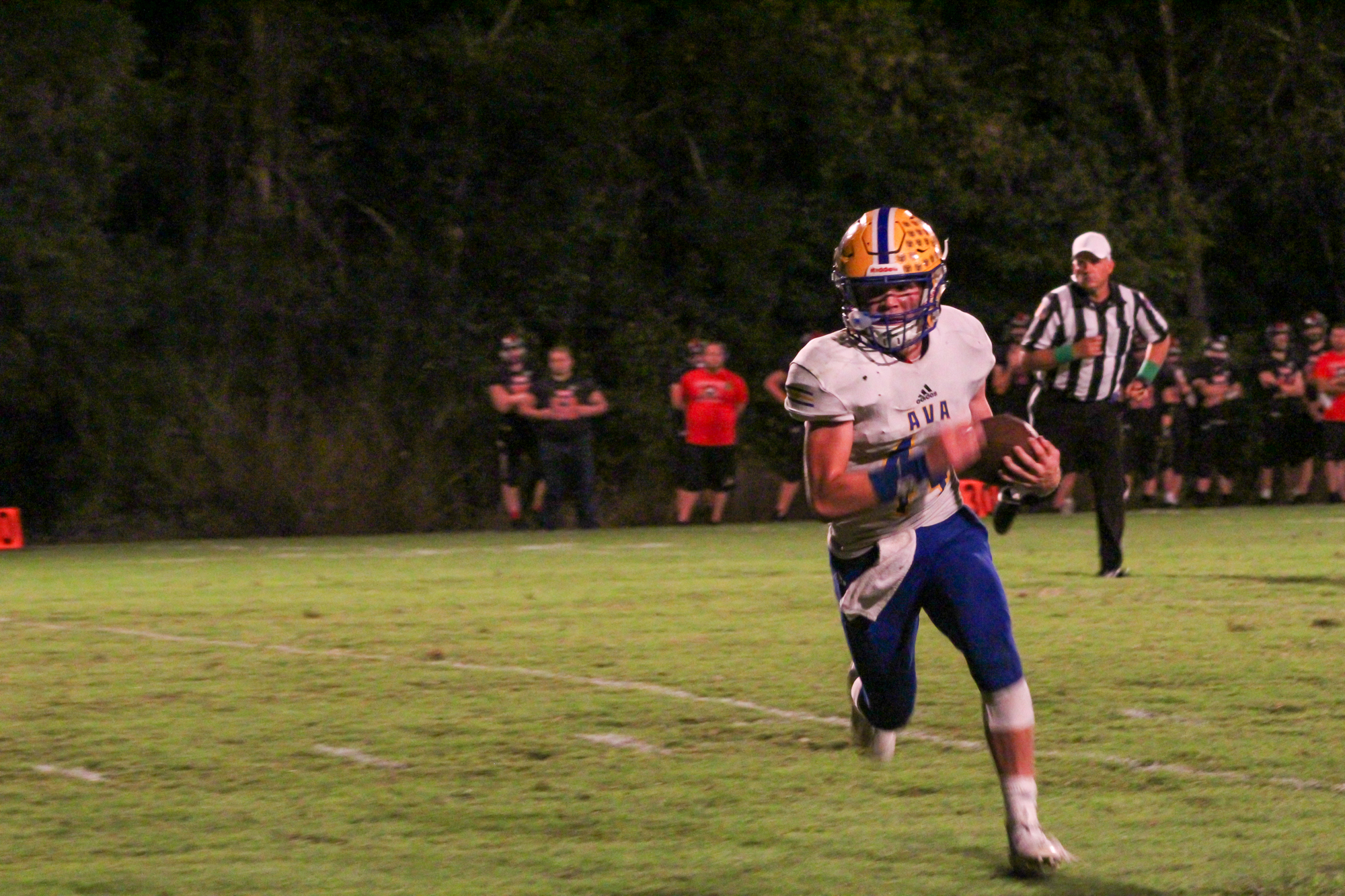 Spencer Skyles (44) carries the ball during an SCA Conference, Class 2 District 3 game against the Tigers on Friday, October 4, 2019, in Houston, MIssouri. (Kayla Dry/Special to the Herald)

Both teams have pummeled Salem, Houston, and Liberty-Mountain View this year. The Bobcats blew-out Houston and Salem with goose eggs, but stumbled slightly against Liberty, scoring 47-20. Having lost a coach recently, Bryan Tate, 26, the Thayer Bobcats have even more reason to fight to the wire for a perfect season.

“They’re playing with some passion now,” said Swofford. “They lost… one of their assistant coaches passed away last week.”

On offense the Bears leaders include Myers with a season-high nine yards – over 84 plays – while Swofford has found gaps and run around defensive lines with a season-high 53 yards rushing. Spencer Skyles (60 yds) and Mendel (45 yards) have also contributed in clutch moments with five touchdowns between the two.

This year the Bears have raised some eyebrows on the gridiron when Swofford and his receivers went over the defense. Josh Bray has completed 29 receptions, averaging 8.8 yards per play. Skyles has received 14 times, averaging 16.1 yards per play with six touchdowns between him and Bray.

Zach Mendel may not have found pay dirt in his adventures with the Bears but has received for 107 yards with a 26.8-yard average per pass with a season-high 26-yard reception. On defense, Mendel has also come up with several interceptions and is credited with breaking-up three pass attempts on last Friday’s visit to Houston.

The Bears offense has averaged 11.7 first downs per game this season, 51 of which were by ground and another 15 by air.

At 2,082 combined passing and rushing yards this season, the Bears offense has seen just one SCA opponent which could hold them. In Week 3 the Bears were kept at just 20 points while averaging almost 38 ppg.

Whether it be a mind game or the adrenaline from a deep-seeded rivalry, the Bears did not perform as their statistics show they should have.Swofford was under par on passing with a 66-percent completion rate against the Panthers, compared to 76-percent this season.

As Coach Swofford once alluded to, the Bears do best ahead of the chains. This season they averaged 98.1 yards on the first-and-ten, with just 15 third-down conversions and 8 on fourth down.

However, the Bears have only been stripped or have fumbled eight times, one in which they recovered the ball. So, the offense has been doing a superb job, pushing forward with 139 minutes and 23 seconds of possession time this year, allowing just 36 points on turnovers.

Those numbers along the way have brought the Bears to where they are today, 6-0 and headed for a showdown. This game will determine the SCA Champions, and one school is going to lose their perfect record.

“It’s what high school football is all about,” said Swofford. “It’s about great championship games and it’s great (that) we have it at home. We’re familiar with this big game situation. They are too and they always end up going far into the state playoffs in their class, as we have the last four years. (Their coach) was one of my mentors and I’m honored to get to coach against him, to be honest.”

Lately, Swofford has been hitting targets in both shallow and deep reaches down the field. With a season-high pass completion for 51 yards, Swofford has shown that he can not only hand off and rush but can throw accurately.

“You know, we were talking about how early on the season we didn’t feel like he was real accurate,” said coach Swofford. “He’s getting better each week.”

The Bears failed to score on their first possession in Houston last week despite a 21-yard option pitch to Bray on second-and-eight. On the next play Spencer Skyles fumbled the ball for the Bears’ first turnover.

The Tigers’ time on their second offensive possession did not amount to more than a one-yard gain amidst three incomplete passes, one nearly picked off by Mason Cole. As is now custom, Myers found the pay dirt for the first six points, followed by a three-yard walk by Skyles for the two-point conversion.

Leading 8-0, the first quarter came to a close with just one touchdown even though the Bears converted to first down four times in the first 12 minutes. The Bears were clock-efficient in the second, finding the endzone on four occasions in just over two minutes of possession time before the break.

The first tallied onto the board in under four seconds into the quarter. Thanks to carrying the possession over from the first on the Houston 17, Swofford found Skyles in the endzone and Myers trucked through the extra three to extend the lead to 16-0.

Just zero seconds was all it took for Ava to score again. Myers charged through the punt formation to block the kick, recovering the ball and running the final dozen-or-so yards for another six. On that momentum, Myers charged the three yards for the extra two, furthering Ava’s lead to 24-0.

The quarter wasn’t anywhere near over for the now-anguished Tigers. Less than two minutes into the second, they had allowed 16 points and had another 16 points to give up before they got to catch their breath over the half.

With 9:19 left in the half, the Bears started their third drive down the field, starting on the Houston 32 thanks to a recovered fumble. 12 yards up the middle by Myers set Swofford up for a breakaway rush for 20 yards and another touchdown for Ava.

Swofford played the ball into Skyles hands for the two-point conversion. With 2:28 left, Ava started a 72-yard drive to drain the clock down to 1:18.

In that one minute and ten seconds of possession time, Swofford moved up four yards before getting stopped by line backer Korbyn Tune. Swofford found Mendel deep down the center of the field, but the pass was dropped after Mendel lost sight of the ball in the stadium lights.

“That kind of catch is a lot harder than people think or realize,” said coach Swofford. “They see that on Sunday (with) guys that do that for a living, making it all the time. But when you’re running in perfect stride and it just gets up there, gets through his hands. He was beating himself up, but he’ll make that catch (next time).”

The play would have been a big one in an already big quarter for the Bears. Myers moved it up eight yards on third-and-six, converting to a fresh set of downs. Somehow, Skyles broke loose up the right side of the Tiger defense and hauled it for 60 yards to the endzone and Swofford found Blake King for the extra two points, putting Ava up, 40-0, over Houston.

The Tigers went ahead and allowed the clock to expire on fourth down before retreating to the locker rooms.

The second half was junior varsity against the Houston varsity, and the Tigers’ woes had not yet ended.

After a punt Mendel was at the helm of the offense, sneaking up the middle for a 19-yard scramble to the Houston 11 and a fresh set of downs. A foul start by the JV offense set them back five, but Zach Richards entered the stat book with his first touchdown of the season.

The up-and-coming full-back couldn’t do it a second time from the three, leaving Ava with six points in the third.

In the fourth Houston scored once for eight points on a 29-yard rush by quarterback Dakota Burchett and a three-yard squeeze by Ty Franklin. Houston’s final possession of the game ended with a punt from the Houston 49 to the Ava 12.

An odd foul-start call was made on a kneeling formation as Ava brought the game to a close, running the final (approximated) two minutes of the game. The clock was not stopping for anything given the lead Ava held, so the penalty actually helped drain the clock down to 45 seconds when Mendel kneeled on second down.

19 seconds and a kneel on third was enough to kill the game clock, sealing the 46-8 victory for the Bears.

All of Ava’s 46 points were scored off turnovers by the Tigers while they failed to make any points on turnover opportunities presented by the Bears.

One thing which continues to plague the Bears are yards given up by penalties. This season Ava has given away 330 yards, averaging 55 yards per game. Common mistakes irritating the Bears’ paws occur primarily on the line of scrimmage with foul starts, illegal shifts, and encroachments eating up too many yardsticks.

“We definitely need to cut those out, said coach Swofford. “That’s probably the fewest (40 yards) we’ve had to be honest with you. We still need to get those taken out and get those out of our system.”

Friday can be expected to be a packed house at Harlan Stadium. Of any game this season, the word on the street is that this is the ONE to watch.

“The more people we have there, the better,” said coach Swofford. “We love having a big crowd and it’s going to be a great Friday night football game.”