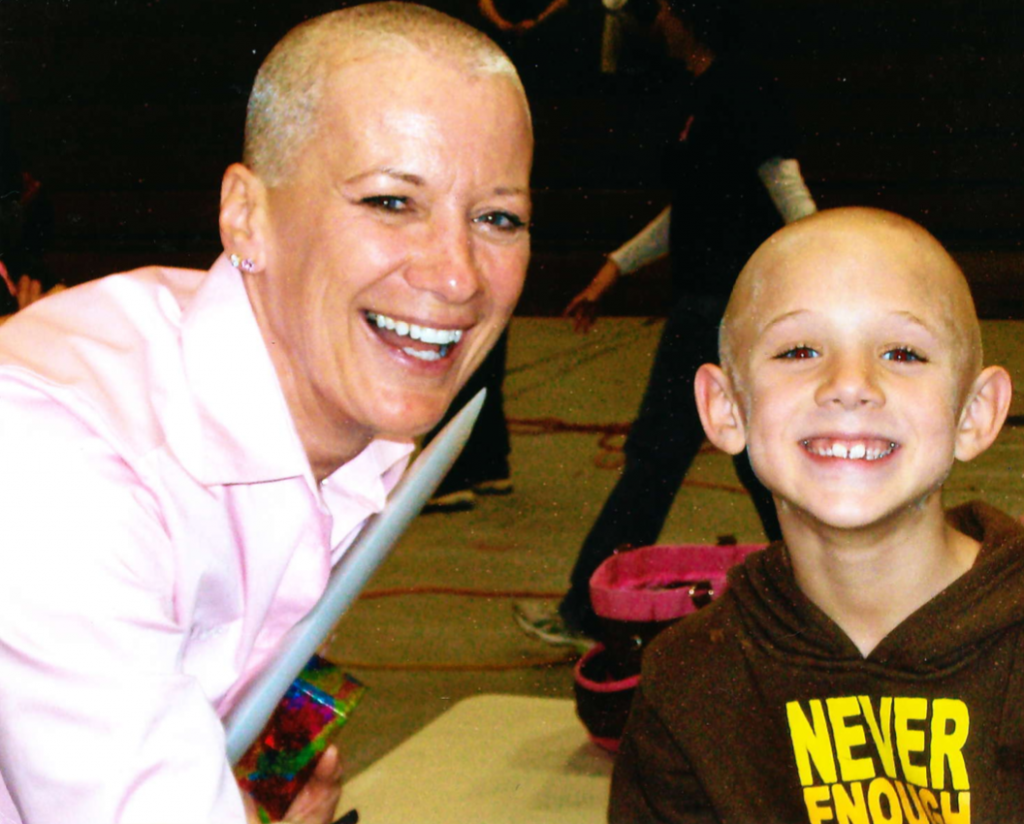 Liz Kyger, left, is shown above with Dylan King, one of the many students who showed support by shaving their head. Dylan is now a senior in high school.

10 years.  It’s been 10 years almost to the day that I completed my year long cancer surgeries, chemo and radiation treatments.  A lot of what happened during that year I’ve chosen to forget or block out, I mean why think about it or dwell on it?  But what stood out clearly and distinctly during those times and what I will never forget or block is the overwhelming support I felt from this community that wrapped itself around me and lifted me up.  From the day I got the call from the doctor on my plan period to when I rang that golden bell signaling the end of treatments, I felt that my home town, Ava, was behind me.

Here are just a few of the examples of why Ava is and always will be the place I can never give enough back to.

On the day I got the results, my assistant principal at the time and good friend Dave Williams, checked me out of school and went with me to my mom’s to tell her the news I received. He had arranged for my classes to be covered.  Surgery was scheduled quick, it was fast growing and later was diagnosed as Stage 3 because it had spread.  Brandy Harvill and Ann Leonard, fellow teachers came to the surgeries and I remember Ann kissing my forehead as they wheeled me in.  Later both of those dear people and many others, would go with me to the countless doctor appointments  and chemo treatments. They would pick up my mom and then me since I wasn’t allowed to drive.  Ann set in on the initial oncology conference and took notes, knowing it was too overwhelming to remember all the details.    The school sold several hundred  t-shirts that said on the back, “Kyger will crush the enemy” in pink letters. (We all know who that enemy is)  They gave me the proceeds from the t shirts.   After the first surgery and before the chemo started, the school held an assembly and 75 members of the school, staff and community joined me as we shaved our heads to raise money for Neighbor Helping Neighbor, our local cancer support  organization.  On diagnosis, they had immediately cut me a check to cover transportation costs to go to treatments. At the time, and still now, I am astounded on the number of people that they continue to help.  That day during the assembly, the band played something rousing and inspiring. There were many of our local stylists who donated their time and equipment to do the head shaving that raised so much awareness and several thousand dollars.

As I left school before my surgeries, I was escorted through all three buildings and each teacher and most of the students wore pink to show me support that day. The kids sent me notes, cards and encouragement the months I was gone. White blood counts were too low for me to be at school.   Their messages were so sincere.  They painted pink rocks (spirit stones were a daily incentive in volleyball) then made a pilgrimage to my last day of health class to hand me a stone with a hug.  And I will certainly never doubt the power of the prayer lists I was on at so many of our churches.  Did I say earlier I felt overwhelming support?

There is more than just the disease and the side effects of the treatments that make surviving cancer a challenge that you hope no one you care about ever has to go through.  There is also the doubt that comes when your doctor refuses to admit the exposed dangers of an experimental drug that he prescribed to you, treatments that you wonder might be only to profit the drug companies and tests that you can’t believe you really need over and over.  And a technician that was so jaded from his daily life that he was abusive during a routine test.

Plus, you learn as a necessity that you must be forever pro- active on your own health decisions.  You need to be vigilant on getting screened, never ignore your own body signals and  constantly weed through the onslaught of information to choose what works for you and always, always question those  generic treatment plans that are offered.

But all the while what really allows you to heal, be hopeful and keeps you alive is the recurring, reinforced memories of a compassion that was demonstrated again and again by your town, your people, your students, your school, family and friends.  The knowledge that they were behind you, loved you and were there to build you up is the true remedy.  With that, how can you not crush the enemy?