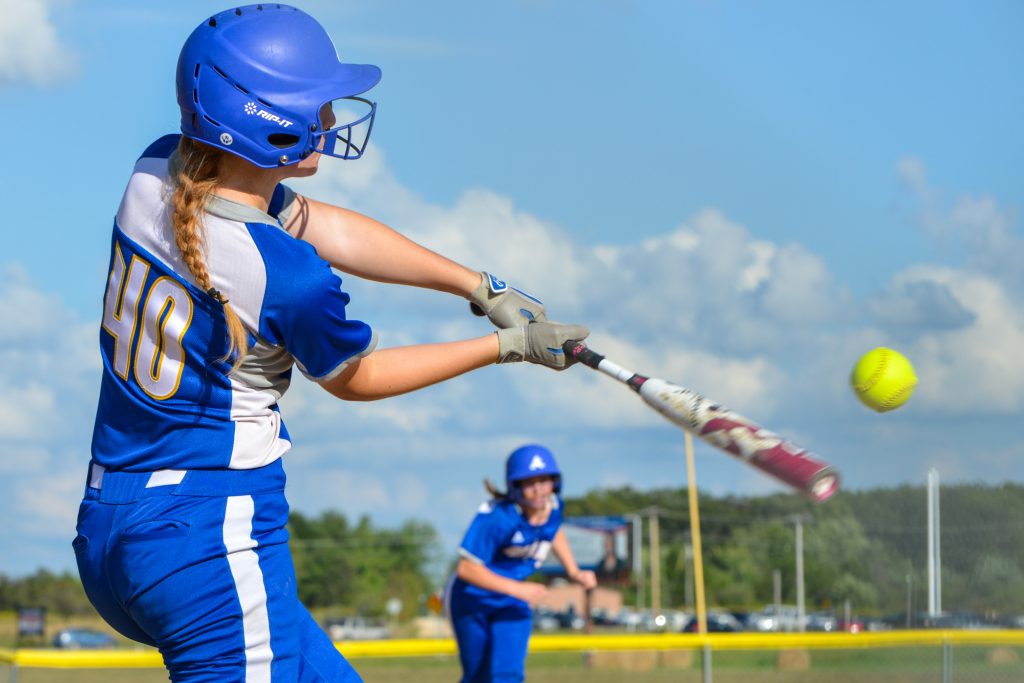 Ava High School batter Keeley Akers (40) smashes the ball to deep left field for a two-RBI Double in the top of the first inning at a game on the road against Salem on Monday, September 30, 2019. (Jason Hoekema/Herald)

SEYMOUR – The Lady Bears are back in the black with a 9-7 record for the .778 winning percentage this season with a confidence-building 17-4 win on the road against the Seymour Lady Tigers.

Seymour, sitting in a slump at 5-10, didn’t seem to have much of an answer for the Lady Bear offense. Olivia Gastineau reaching first in her first at-bat. Lately Olivia has been on fire, pulling-off some big plays in her slot at shortstop.

On Monday she went four of five at the plate and stomped on home plate three times.

Her first hit went into left field, followed by Lexie Gastineau and Reagan Koop who were both put out on a live ball. With two away, the inning looked to close with just one run on the board, but Miquia Heinlein walked up to the box and came alive for Ava.

Gastineau was three of four, scoring three runs and grounding out to short in the top of the third. A dropped ball in centerfield in the top of the fourth allowed her to tag-up at second and deliver a third run for the Lady Bears.

Heinlein went somewhat quiet after the September 5 game against Dora. In games covered by the Herald, she was five-of-fifteen at the plate. Monday, she went four-of-four and delivered four RBIs and two runs thanks to her courtesy runner, Kaelyn Stillings.

Her first hit came on the seventh look from Seymour pitcher, Reghan Matlock and dumped in left field for a single. She had a second, quality-at-bat on her next visit to the plate when she hit a stand-up RBI double on the eighth, 2-2 pitch.

At the top of the third she nailed another one into left center for her second double. Her fourth trip earned her another two RBIs as she found the fence in left field for a third double. 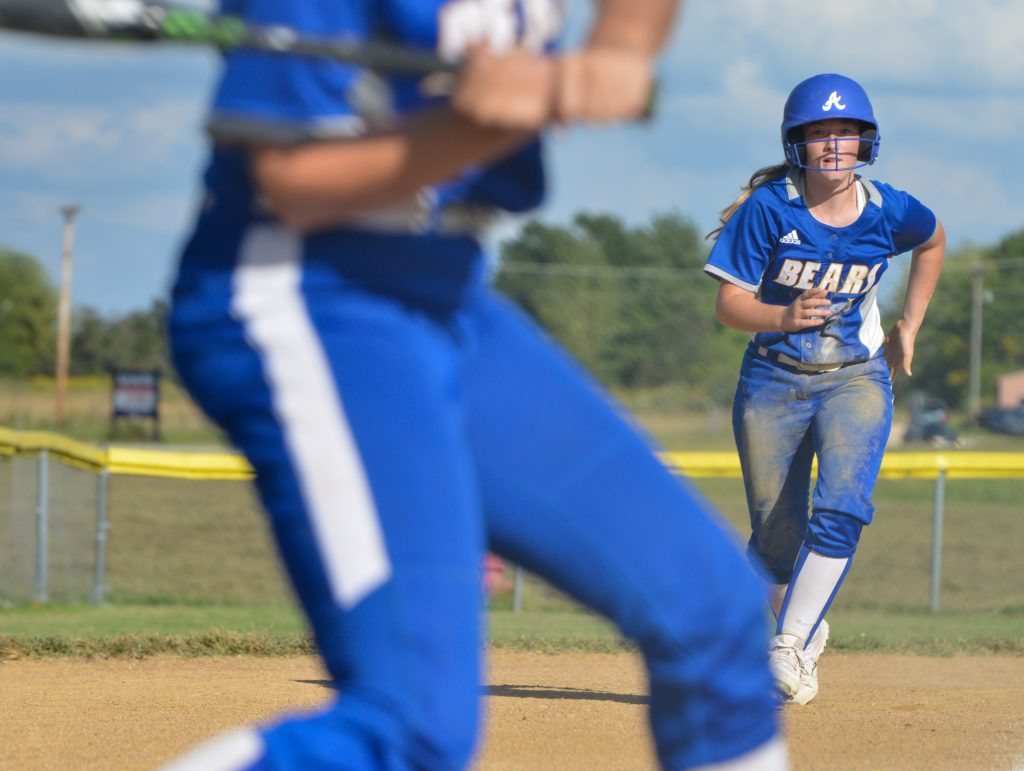 Ava High School baserunner Olivia Gastineau (10) takes her lead from third with Miquia Heinlein at the plate during a game against Seymour on Monday, September 30, 2019, in Seymour, Missouri. (Jason Hoekema/Herald)

With Olivia Gastineau and Heinlein closing the diamond in the books, Macee Cutbirth reached first on an error at first and made the Lady Tigers pay for it with the third run of the first inning.

Makayla Miller earned an RBI in her first turn at the plate and went three-of-four with one run in the top of the fourth.

With three put away, the Lady Tigers answered with runs from Elizabeth Buchanan and Crystal Misemer.

Seymour’s leadoff batter was walked on a rough start for Ava freshman pitcher Sarah Mendel who walked five and picked up just one K. The defense was there for her though, delivering 14 outs to put away Seymour in just five innings.

The Lady Bears picked up another three runs in the second, Olivia Gastineau, Lexie Gastineau, and Koop circling the bases with a walk, a single, and two RBI double, respectively. Koop made her way home thanks to the RBI double by Heinlein, but Cutbirth, Keeley Akers, and Miller were put away after the damage had already been done, the Lady Bears leading 6-2.

At the top of the fourth the Lady Tigers had all but given up with Ava leading 9-3. Akers led the order with a single hit into right field which rode the line. It wouldn’t be her last time batting in the fourth, either.

Home plate turned into a revolving door for the Lady Bears as Akers circled around with Miller’s second single and hit into shallow centerfield by Mendel. Bases loaded; Olivia Gastineau dumped one deep into left centerfield for a two RBI single.

Lexie followed suit with a seven-pitch at-bat and made first and pushed Olivia to second.

Koop made her fourth appearance and pulled the ball into shallow left field. Her hit tallied up her sixth RBI of the game, hitting three-of-four times at the plate.

Heinlein, whose cut has come alive, picked up her third and fourth RBIs when she found the fence again for her third double of the afternoon. Her courtesy runner, Kaelyn Stillings, swapped spots at second and advanced to third with Cutbirth’s second hit of the afternoon.

Ava was well ahead, 17-3, and Akers found herself back at the plate after the Lady Bears batted around the order. She hit to the shortstop who made a fielder’s choice and put Akers away at first. The throw to first allowed Cutbirth to end her round, blasting the Lady Tigers with eight runs. 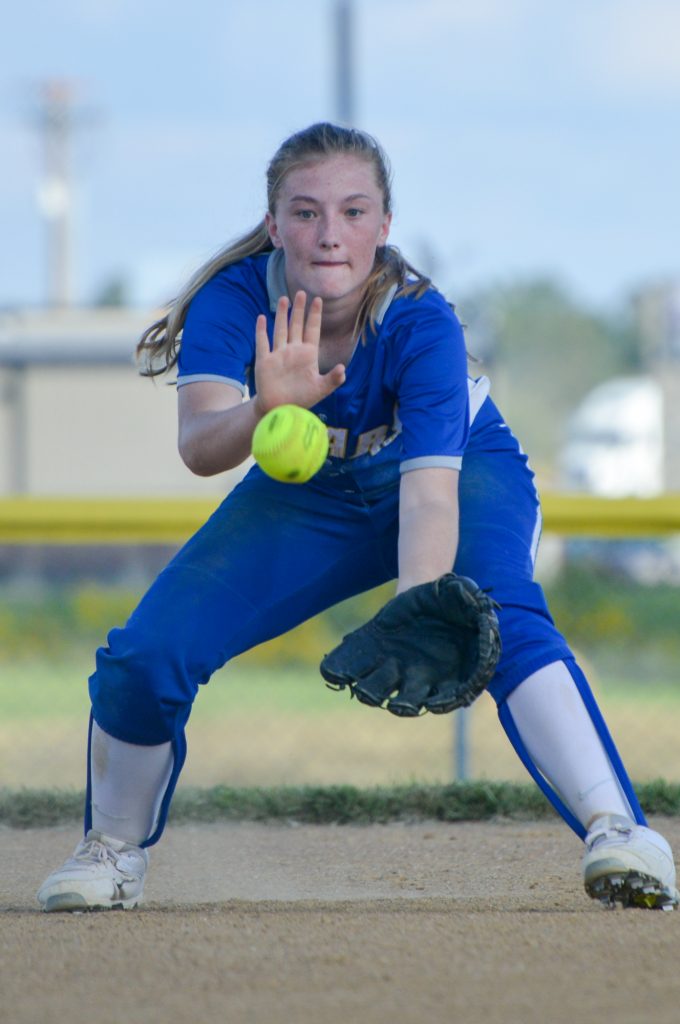 Ava High School shortstop Olivia Gastineau (10) fields the ball that she threw to third in a Fielder’s Choice play in the bottom of the third inning of a game on the road against Seymour on Monday, September 30, 2019. (Jason Hoekema/Herald)

The Lady Bears seemed to attempt to keep the streak alive, Miller hitting a single and getting bumped out to third by a double from Mendel. Ava’s pitcher was three-of-four Monday afternoon, earning an RBI and her courtesy runner Allyson Roberts making home twice.

It was a baserunning mistake by Miller who was caught leading third for the third out, stranding Roberts at second.

The damage had already been done and the game was already decided at this point. A comeback from the Lady Tigers would be one for the books, and they tried.

Five appearances by the Lady Tigers resulted in one more run, but their hitters were swinging for the fences with Rylea Owens smacking a ball into right field for a single. Hailey Felton nearly put one out of the park, falling short and rolling to the centerfield fence.

She doubled, putting Owens at third. Mendel picked up her single K at an important part of the game. With Seymour’s leadoff batter Lillie Rasmussen up and two on, the Lady Tigers could have pulled a momentum swing to take it to seven or more innings.

But Mendel had a perfect 1, 2, and third called strikeout to take that chance away. On her second look, Buchanan grounded out to Ava shortstop, Olivia Gastineau to close the fourth.

The rest, they say, is history. An uneventful fifth ended with three fly-outs to close the book at 17-6.

The Ava Lady Bears took on a 4-2 loss on the road against Lebanon High School on Tuesday. This evening they host Alton, who sits at 6-11.

The Lady Bears continue to sit atop the Missouri State High School Activities Association Class 2 District 11 rankings with a season record of 9-8. They appear to be 0-1 in the SCA with a single, 16-1 loss to Salem on September 10. 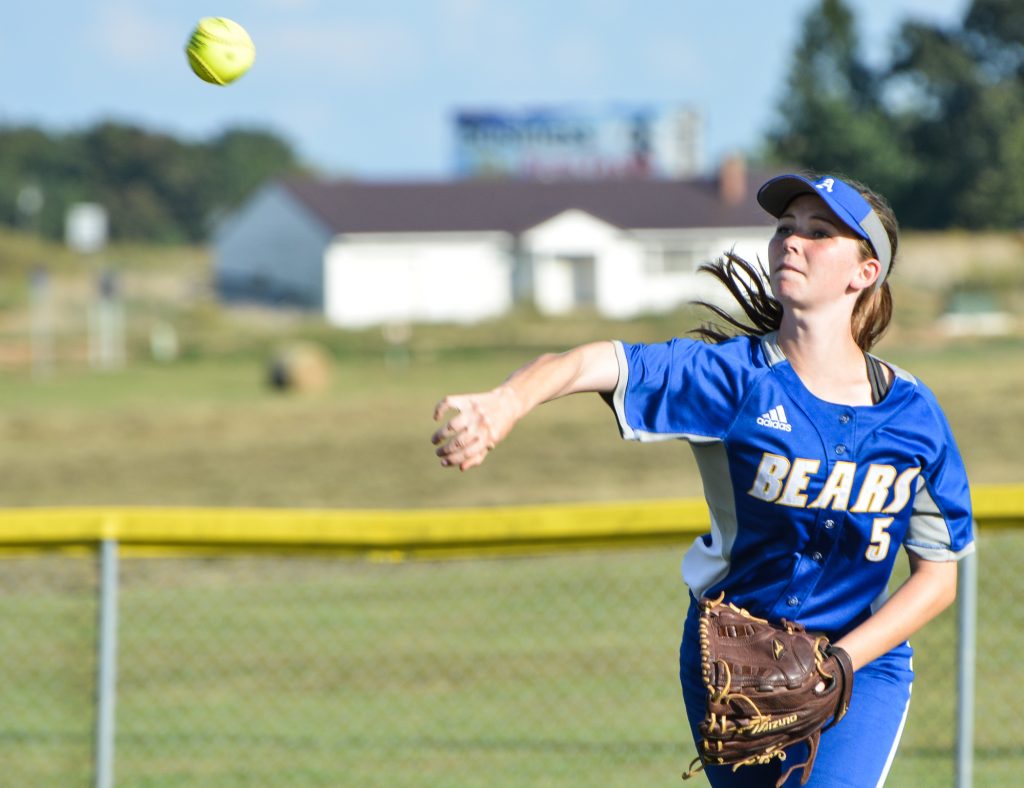