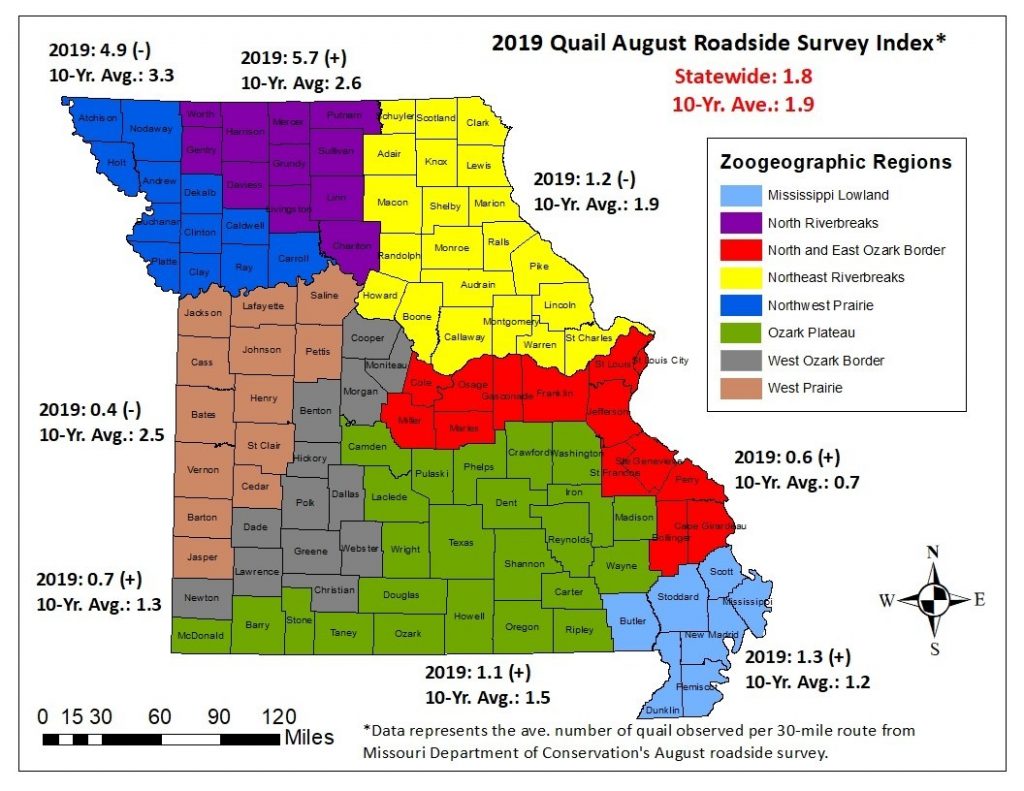 Quail (above) and pheasant season starts Nov. 1 with numbers about the same as last year. MDC staff advise good hunting can be found in areas with quality habitat in north and west-central portions of the state.

Each August, MDC conservation agents record the numbers of quail and pheasants they see while driving a 30-mile route – called the roadside index. A total of 110 routes are completed around the state. These numbers are then tallied and grouped by eight geographic areas of production – called zoogeographic regions. (SEE RELATED MAP)

According to MDC, this year’s statewide average roadside index of 1.8 quail per route is slightly above last year’s index of 1.7. An average of 0.3 pheasants were recorded per route, unchanged from last year.

“Hunters can expect to find a similar number of quail as last year, except for the Northeast Riverbreaks and Western Prairie regions where numbers were down notably,” said MDC Small Game Coordinator David Hoover.

Hoover added that opportunities to hunt pheasants are much more limited, but northern portions of the Northwest Prairie and Northern Riverbreaks regions showed the best numbers this year.

“The amount of quality habitat is the most important factor for maintaining quail and pheasant populations, but weather also plays a very important, and often unpredictable, role,” said Hoover. “This year’s better-than-expected production highlighted this complicated relationship. The wetter-than-normal conditions this spring and early summer likely benefited birds in areas with good habitat due to the unusually high number of crop field acres that did not get planted and were left fallow for much of the summer. While not good for farmers, it was good for quail and pheasants as it created near ideal brood-rearing conditions.”

He added that hunters focusing on the best available habitat should find birds even in regions with lower bird counts.

“To find birds, hunters should key in on areas with an abundance of diverse native grasslands or CRP (Conservation Reserve Program), shrubby cover, and some cropland nearby,” he said.

Hunting season for quail and pheasants is Nov. 1 through Jan. 15, 2020. The daily bag limit for quail is eight with a possession limit of 16. Daily bag limit for pheasant is two male pheasants with a possession limit of 4. Get more information from MDC online at https://huntfish.mdc.mo.gov/hunting-trapping/species, or pick up a copy of MDC’s 2019 Missouri Hunting and Trapping Regulations booklet, available where permits are sold.

For information on places to hunt quail and pheasants on public lands, check out MDC’s Small Game Hunting Prospects online at https://huntfish.mdc.mo.gov/sites/default/files/downloads/SmallGameHuntingProspects.pdf.

MDC Resource Scientist Beth Emmerich manages the August roadside survey, which has been conducted since 1983.

“It represents the best way we have to track quail and pheasant populations on a statewide basis,” Emmerich said. “The survey does a good job of tracking large-scale population changes and is a good barometer for how more localized populations may also be doing from year to year.”

She added that 2015 saw the highest statewide roadside index in nearly a decade.

“That summer was extremely wet, resulting in many crop fields in northern Missouri left unplanted, and most of which developed diverse annual plant cover that persisted well into August. This abundance of good brood cover led to a very good production year for quail, despite the abnormally wet summer conditions. We had similar conditions this summer, but the previous winter had more periods of prolonged snow cover than we’ve had in the past three years.”