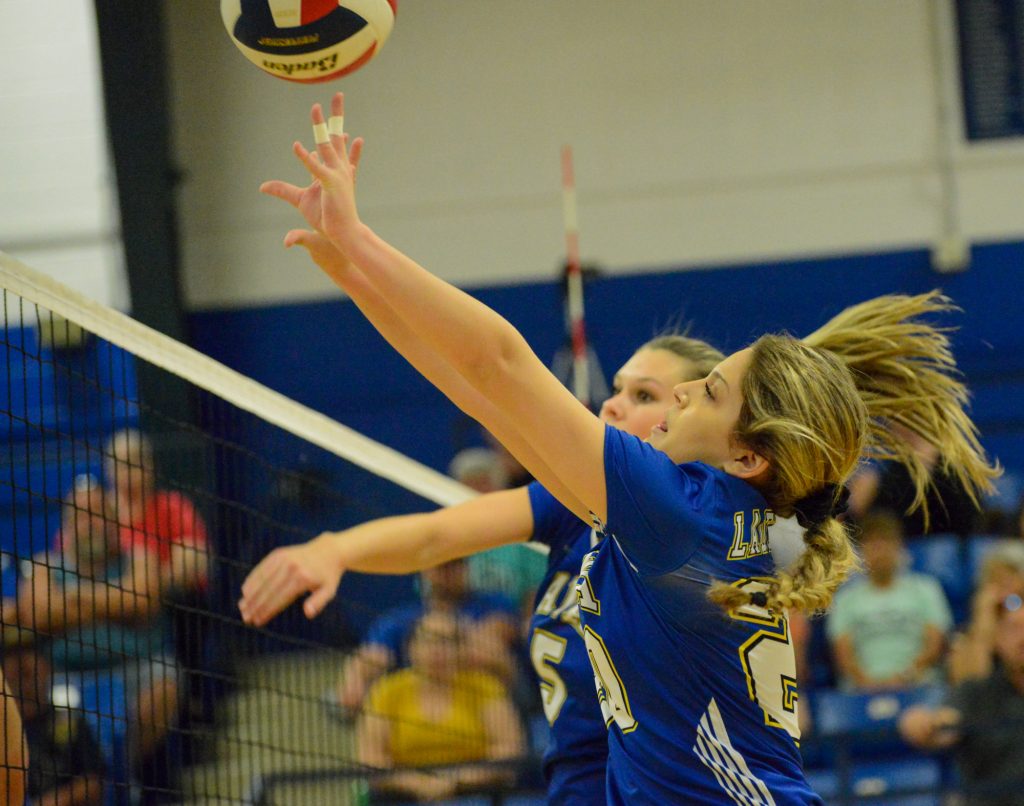 Ava High School sophomore offensive hitter Lauren Hall (26) tips the ball over the net during a match against the Lady Panthers on Thursday, September 19, 2019, in Forsyth, Missouri. (Jason Hoekema/Herald)

FORSYTH – The Lady Bears kicked the beehive, or the Panthers’ den, after serving Forsyth two losses at their own tournament on September 14. Coach Emily Petty called it a couple of days earlier after the Lady Bears topped New Covenant Academy, 2-0.

“We’re traveling to an angry gym,” said Petty on Tuesday, September 17. We beat them once in pool play over the weekend and beat them in the third-place game to bring home that hardware. They’ve got our number. They’re going to be on fire for us, and it’s going to be an intense game.”

The Lady Bears struck first with a kill from Lauren Hall which went out of the boundary off the arms of Kenzie Koen. At 2-0 into the first set, a tip from Emily Shipman caught the Lady Bears off guard. Hall and Olivia Heriford made a block, but it bounced out allowing the Panthers to rally back, 3-2.

Hall came back up with another kill, but Forsyth served it right back with a kill missed by Heriford. Trouble started brewing on the Ava side of the court when the set was at 6-5, Forsyth. 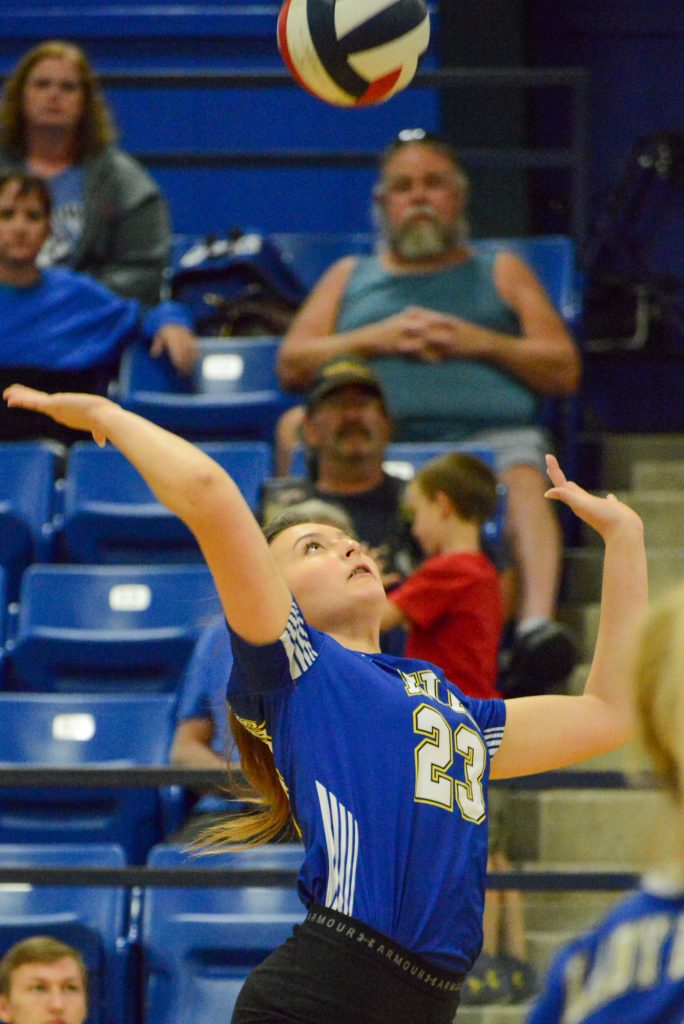 Senior offensive hitter Haley Herrera (23) strikes the ball during a match against the Lady Panthers on Thursday, September 19, 2019, in Forsyth, Missouri. (Jason Hoekema/Herald)

One hit found the maple strips as the Ava team watched and stared with little action taken to avoid the point to the Panthers. Right after the point, the court went quiet with little communication going on between Ava players, leading to another point for the Lady Panthers.

“We pulled our rover off from behind the block a little bit and our player that plays behind the block we pulled them off just because they’re such a dominant hitting team,” said Petty. “We are thinking if we create more space behind the block, we’re in better position to get a ball up. They started tipping more on us and we weren’t ready to react to it and play the ball that was in front of us. We got sloppy.”

Heriford ended the Panthers rally with a solid kill, but at this point Forsyth had already taken a solid lead which they would extend through the rest of the set. The next serve from Ava turned into a loss of rally when the defensive return bounced out, allowing the Lady Panthers to rally for another three points to extend their lead to 13-7.

Sydney Snelson attempted to make a dig, but it soared out of play. With the score at 15-7, coach Petty called the Lady Bears first timeout of the evening. The short break didn’t break the Forsyth rally where a major block from Cadence Swank put the Lady Panthers ahead by ten at 17-7.

Swank and Shipman started serving up blocks at what seemed every attack by the Lady Bears. Often tipping off an Ava blocker’s hand, the Lady Panthers kept sideouts to a minimum and kept the rallies on their side of the scoreboard.

“The girls have got to see around the block, said Petty. “They’ve got to figure out a way to cut, move, shimmy over something and reach high. We’re going to come up against big blocks all the rest of the season and they’ve got to see it, they’ve got to be diverse, and not just swing straight down.”

Behind 21-9, Petty called another timeout to try and bring the Lady Bears focus back to the court, for a short rally of four points thanks to an Ace from Hall and three mistakes on the Forsyth court. Their comeback was cut short by a Panther timeout where Forsyth slowly chipped their way to 23-15.

Another hole in the Ava defense and a kill by Haley Herrera stared at ending the first set, 25-15, setting the Lady Bears behind after set one.

Things looked neck-and-neck into the second set before Shipman exacted a resounding block of a hit from Heriford, stunning the Lady Bears as things started looking like a possible 2-0 blanking of the same Ava team which brought two losses to Forsyth not but a week before last Thursday’s match.

Down by two points, Petty took another timeout to refocus the team. A tip from Herrera brought the Lady Bears back within one, but they would stay behind with a line violation and a carry as the score climbed to 13-11 for the Panthers.

Ava knotted the game at 13, then again at 15 before the Lady Bears went ahead ,18-15, with Sarah Dobbs serving the ball. A sharp kill from Swank took the short rally away but Ava maintained at least a two-point lead before pulling ahead 24-19 when they lost a rally on a back dig.

With the ball service coming from the Forsyth court, a comeback was possible. However, a back-and-forth ensued before a block bounced out for the 25-19 win by the Bears to tie the match at one apiece.

An Ace by Landry Stuart was answered by an attack from Heriford to stop a rally with the scoreboard reading 2-1. Heriford went on to serve, tying the game after a net violation from Forsyth. The rally wouldn’t last though, Swank flicking her wrists as she met the Ava defense sent the ball to the side where no backup was available. 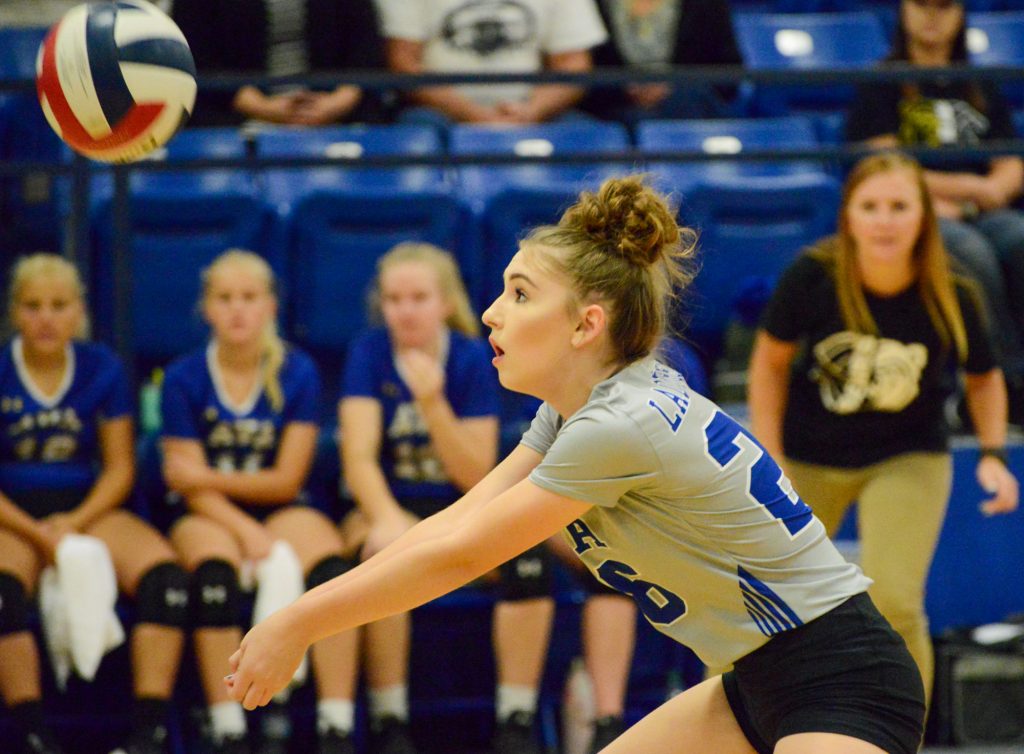 At 4-3, with the Panthers in the lead, Forsyth went on a five-point rally. Continuing to chip away at the Lady Bears the score slowly went from 4-3 to 4-9, stretching out to 15-10 as communication errors and blank stares at the return put Ava out of contention for the match.

Before they knew it, Swank came up with another deflating kill for the Lady Panthers, who now led 21-14.

An Ace from Emmalea Cook crowned a three-point rally, taking the Lady Panthers to 24-15 when they lost the rally after a return went out of the boundary.

The Lady Bears, down by nine, needed some magic to come back from the nine-point deficit. With Ava playing uncharacteristically and less of a cohesive unit, Swank was able to come up big with the final kill shot, straight into a gap in the Ava defense.

“(We’re going to practice) like we’re going to win,” said Petty. “Yesterday they came in kind of down, tired, coming off a good game on Tuesday. They were beat, but we saw the game (against Forsyth). Changing their mindset, we don’t have time to be tired. We’ve got to pick up our endurance and our mindset is going to be positive, looking forward, and saying we won last night (so we) go into tomorrow’s game with the same thing.”

The Lady Bears went on to play in the Cabool Invitational Tournament on Saturday, with wins over Mountain Grove and Thayer, a tie with Neosho, and two losses against Cabool and 5-0 Licking.

With all of that in consideration, the Ava Volleyball record stands at 11-5-1 as of Monday, September 23. The Lady Bears play against Willow Springs at home this evening and will host Thayer on October 1st.