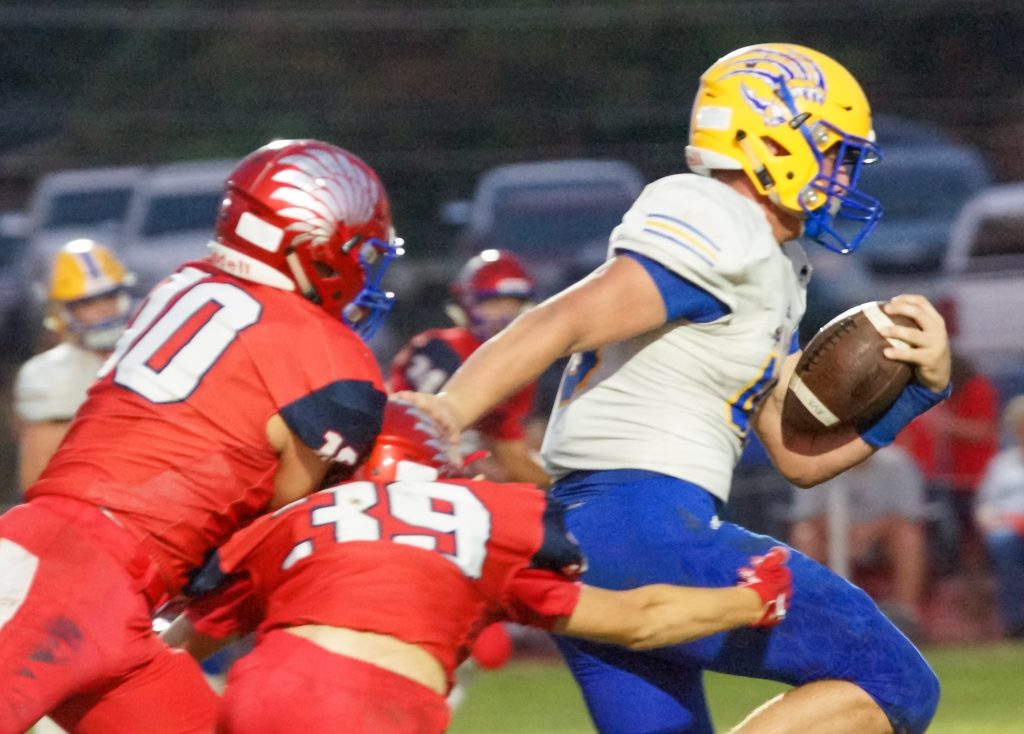 MOUNTAIN VIEW – A couple of years ago, a 50-14 win over the Liberty Eagles may not have been possible. Regardless of the Ava win streak since 2016, the scores were much closer with no greater than a 21-point lead in 2017.

Area football fans once thought of the Eagles as they do of Lamar today. A large part of that may have been to a clutch quarterback and a great coach, one of which has moved on to greater things.

“I’m just going to tell you this, the best player in the conference in the history of the SCA was right here and that was the coach’s son.”

The program, like all programs, is in a cycle where times are tough. Kids come and go, as does the talent available to any high school team in the United States. It ebbs and flows like tidal waters on a beach.

For the Bears, Liberty is in a lull and Kayden Myers took advantage of it Friday. With him, Ava was able to put up 12 points in the first quarter, blanking the Eagles on the board after the first 12 minutes of play.

Ava deferred at the toss, kicking off to Liberty and starting the game off on the Eagles’ 32. The Eagles’ first possession lasted just one minute and twenty-three seconds. The first of many sacks from a now-seasoned rushing defense clobbered through the Liberty offensive line on several snaps, leading to several incomplete passes and a partial shutdown of their offense.

Ava started their first drive on their own 31. Straying from their own ground-express way of conducting the offense, Nate Swofford connected with Josh Bray for a 27-yard pass completion on a toss-out to the right side.

Now on the Eagle 41, the Bears found themselves giving-up yards in the first minutes with a holding penalty, setting them back to first and 15. Another shot out to Bray gained nine and a 32-yard rush by the Bears’ “Mack Truck” in Kayden Myers found the pay dirt with 6:59 left in the first.

The Bears have continued to find some trouble in completing two-point conversions. Friday they went four for seven in the extra points following the touchdown, the first two flopping and keeping the Bears down a bit at 12 points.

Just two minutes later Myers carried the ball for another 28 yards for his second touchdown of the evening, ending the first with 133 rushing yards. The Bears’ third possession failed at the Eagles’ 20, turning over on downs.

The Eagles’ defense still had a few cards up their sleeve, though. With a passing offense, Liberty was able to crack the Bear defense with long balls and bombs for big gains on select plays through the game. The first quarter, however, was filled with punts and incomplete bombs as they struggled to gain a foothold against Ava in spite of gaining 35 free yards from chop blocks and holds against the Bears.

The Bears went from 12 points to 22 points before the half, leading the Eagles 34-14 at the break. Myers took the Bears halfway to the first down marker after the Eagles failed to convert after just ten seconds on the play clock lapsed.

On the Liberty 43, Ava went on a two-play, 57-yard drive thanks largely to a toss from Swofford to Spencer Skyles who then ran it up the right side of the gridiron for Ava’s third touchdown. This time the Bears made good on their two-point conversion to lead Liberty 20-0.

The Eagles responded with a bomb from quarterback Jaris Acklin to receiver Kessler Heiney for a 41-yard touchdown completion and extra point by kicker Zach Stretch.

Myers again found the endzone for his third of the night then broke loose on the first play after the Eagles put up 14 points. The senior running back smashed through the defense, stiff-arming his way through the last tackle attempt for a 65-yard touchdown carry with 2:46 left in the half.

Swofford kept the pigskin to tack on the extra two points, putting Ava well-ahead, 34-14. The Bears’ final possession didn’t turn up anything except for a 26-yard breakaway by Skyles, who rushed for 26 yards and one touchdown during Friday’s game. But with 27 seconds left on the clock, the Eagles couldn’t do anything but take a breath and run out the clock.

The Bears added another 16 points in the third quarter with a touchdown from Swofford on a three-yard carry and another in the final seconds of the quarter, taking the Bears up to 48 before Myers found the endzone once more for the extra two points.

Myers has been a force to be reckoned with on the field. Averaging nearly 100 yards per game, the senior has an estimated 520 yards on the season with nine touchdowns over about 75 carries.

“Our Offensive line did a tremendous job,” said Meyers. “They just bowled over those guys and created giant holes for me and I ran through.”

Swofford has also amassed more than 500 yards this season with 221 passing yards on Friday after connecting with Skyles on the option for a 51-yard touchdown.

The Ava offense converted nine times for first downs Friday, and the defense came up with some big plays through the 48-minute game clock. Breaking up a total of 16 passes with two interceptions, the defense did find some valuable lessons when working against a passing offense.

In the fourth quarter Ava was stunned when the Eagles converted on third and 47 from the Liberty 15. A bomb to an open Heiney led to what may have been a game-end touchdown, but a quick learning Zach Mendel was in the right spot at the right time (again) to come up with another game-winning interception.

“If you let (Acklin) stand back and throw it. He will,” said coach Swofford. “He will burn you because he’s a very good passer and they’ve got some good receivers. Our kids did a pretty good job for the most part dealing with those guys.”

Tomorrow the Bears line-up against Salem, yet another South Central Association Conference rival at home against Salem. The Salem Tigers are a larger, Class 3 school with a 3-1 record and wins over St. James, Dexter and Houston. Last Friday the Tigers were handed their first season loss by Thayer, who is now 4-0 like the Ava Bears.

At this point the two juggernauts are scheduled to clash on October 11th on the Bears’ home turf.

Friday is also Homecoming night for the Ava Bears, who will be faced with the task of fending-off a competitive team looking to wreck a homecoming game.

What is the Ava’s leading rusher have to say about homecoming?

“I’m just ready to play,” said Meyers. “I want to go back either way. I’m so pumped up for that one.”