The Ava Music Booster Club has been formed to help support both the middle school and high school band and vocal music departments. The officers for the 1994-95 school year are Tom Roberts, president; Pat Lakey, vice president; and Vickie Corum, secretary-treasurer.

Several friends of Lawrence Barnes gathered in the Hall of Fame room at the Missouri Fox Trotting Horse Breed Association office here last Saturday morning for a surprise birthday party for the longtime member and former officer of the MFTHBA.

Gary Streight was the winner of the free television given away at the grand opening of Ava TV Clinic last Saturday morning. The clinic is owned by Dale Ross.

Sharon Jenkins, of Ava, and Bob Prock, Mtn. Grove, enplaned Sept. 7 in Springfield and flew to Los Angeles, California for a few days visit with their uncle, Berlie Cantrell and family.

Harold and Mary Mitchell will be celebrating their 37th anniversary Sept. 29.

A double birthday party was given Friday evening in honor of Tonya Titus and Kristen Cummins, cousins, in the home of Mr. and Mrs. William Cummins.

Minnie Boyle celebrated her 90th birthday at her home near Sparta recently with her family and friends. Minnie Bruffet was born Sept. 14 1904, near Thornfield.

This year the students at Bradleyville School will be watching their new school being built. Since the school yard is surrounded by dirt piles, the kindergarteners decided to have a “Dirt Day.” They learned how to read, write and spell the word “dirt.” They read a story about mud and then they spent an hour climbing up and sliding down dirt piles.

COUNTY LINE – Joan Rackley visited with Mrs. Bentley Bushong Friday evening. They went to the singing at the Community Center. 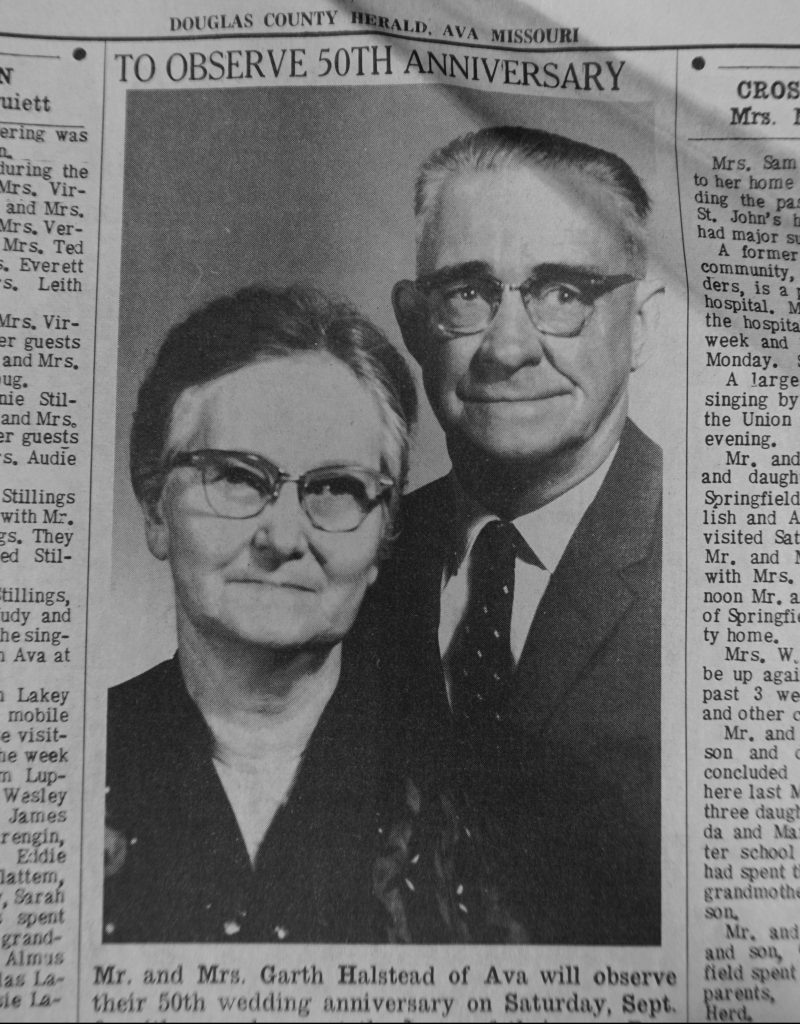 One of the worst outbreaks of armyworms in recent years has hit south Missouri this fall. Numerous reports of this pest has been received by the local University Extension Center, reports L. C. Binder, area extension director.

The National Fox Trot Jubilee, with headquarters at Ava, topped all previous attendance records this year in its 11th annual show and celebration last Thursday, Friday and Saturday. Gate receipts totaled $2,284 – an increase of $110 over last year, and increase of $368 over 1967, indicating the largest attendance ever recorded by the Missouri Fox Trot Horse Breed Association.

Mrs. Mae Naugle visited several relatives last week while she was making a vacation tour with her sister, Mr. and Mrs. Floyd Richer, and daughter, Glenda of Hartford, Ill.

One of five named as members of the U.S. delegation in the next session of the United Nations General Assembly opening in New York Sept. 16 is Shirley Temple Black, 46, one-time child movie star and unsuccessful Republican candidate for Congress two years ago.

Lee Ray, son of Mr. and Mrs. Clarence Ray of Wasola, is on his second trip to Vietnam. He is stationed on the Aircraft Carrier U.S.S. Constitution. Ray’s four-year service time will be up in January and he plans to return to his home in Gainesville.

The fellow who has a lot of crust is usually half-baked and quite probably a loafer.

DENLOW –– Mr. and Mrs. J. B. Alsup have moved to the farm known as the John Henry Mears farm.

GOODHOPE –– Orville Hale recently retired from his job as machinist at Fasco Industries in Ozark. He was given a fishing rod as a retirement gift.

Manager Billy Southworth of the Cards, kissed his winning pitcher, Henry Brecheen, after Henry had delivered to him the game which enabled the Cards to clinch the National League flag. The Cards snared the pennant after whipping the Boston Braves 5 to 4 in first game of a doubleheader.

A jury in circuit court here Friday night failed to agree in the case of W.O. Lassley of Christian County, charged with accepting a bribe of $110 as the price for hiring a rural school teacher. Lassley was convicted of the charge in Christian County in 1942 and sentenced to two years in the state penitentiary. An appeal to the state supreme court resulted in a new trial being, and the case came to Douglas County on change of venue.

The Rev. Howard Woodruff was again named pastor of the Ava Methodist Church.

In the criminal case, State v John Holt and Howard Holt, assault, a plea of guilty has been entered by John Holt, with punishment assessed at $1 and costs and imprisonment in county jail for six months.  Parole granted as to jail sentence.

In Walter Winchell’s column of a week ago there was a hint of romance (of at least more than casual interest) between John L. Lewis and a very wealthy and prominent lady of New York, the owner of the famous Hope diamond. Famous for its great value and the fact that it is supposed to bring disaster to those who own and wear it.  (Note: John L. Lewis was an American leader of organized labor who served as president of the United Mine Workers of America from 1920 to 1960.)

The lunch room program in Ava School which is just a year old this month has grown very rapidly. Last year the daily average of diners was 250 students and teachers, and the largest number eating there last year in a single day was 370. This year the daily average has reached 395 and 410 student and teachers ate at the lunch room Wednesday last week.

Several relatives and neighbors gathered at the home of Mrs. Maggie Alsup Sunday in honor of the 86th birthday of John Proctor, Sr.

The marriage of Miss Pauline Whittaker, daughter of Mr. and Mrs. H.B. Whittaker of Brown Branch, and Doyne Chance of Ava has been announced this week.

Tommy Lusk who is attending Kemper Military Academy in Boonville has been placed in the Kemper marching band, one of the high honors to be attained in the academy.  Tommy, who is well known in Ava, is now a junior in the high school of the academy.

STAR –– Mr. and Mrs. Charley Chamberlain announce the birth of a son, Sept. 20.

T.E. Glass, secretary I.O.O.F. No. 319 of Ava, received a letter last week telling of the murder on Friday, Sept. 12, of John E. Milligan at Hope, Ark. Milligan was a member of the Ava order I.O.O.F. Mr. Milligan is well known throughout Douglas County, having operated a show in this section of the country several years ago.  He also owned real estate in this county.  Milligan was with his show at Hope when murdered.

The cases brought some time ago against various parties in Ava and other parts of the county, for betting on the Primary Election in 1918, were dismissed this week by Judge Chas. H. Henson of Mt. Vernon, Mo., who was called to hear the cases.

Pauline Owens, six-year-old daughter of Mr. and Mrs. Homer Owens of Ava, was run down by a car driven by Murl Malloy, at the northwest corner of the square Monday.  The little girl sustained several severe bruises, but is not though seriously injured.  The car passed completely over her before it could be brought to a stop by the driver, one wheel passing over one of her ankles.  Malloy plead guilty to speeding when brought before Mayor Thomson Tuesday, and paid a fine of $5.00.

Miss Lilla Mankin and four students from the second grade entertained the High School student body with a short program in assembly Wednesday morning. The students enjoyed it very much and hope the other grade teachers will follow Miss Mankin’s example, as we are interested in this kind of work.

The United States has more than one-half of all the hogs in the world.  It will be a surprise to many to learn that in the number of cattle this country is second to India and owns only about 1/7 of the cattle of the world.

Rev. and Mrs. G.R. Curry and son Sam and daughter Miss Nola departed Monday for Holbrook, Neb., where they will reside in the future.  Mr. and Mrs. C.E. Norman are moving this week into the G. R. Curry residence property in the northwest part of Ava, having recently sold their property on Ozark Street to J.E. Horton, of Mtn. Grove.

T.J. Moorhouse and T.H.E. Mathis have secured the agency for Overland cars for Douglas County.

Mr. and Mrs. A.J. Wilder of Mansfield, their daughter Rose Wilder Lane of New York; Mr. and Mrs. Jean Jacques Marquis of Chateau du Chatelard, Switzerland, were guests of R. W. Noll Wednesday, and were entertained Wednesday evening by a dance given at the Noll home.  The dance was a grand success, the music being furnished by home talent. Pendie Medley was the violinist. Mrs. Lane, as well as her mother, is a writer.

GRANADA –– The principal of our school closed the doors and went to Ava last Wednesday on a joy ride we suppose. What next will teachers not do?

A seven-year-old girl saved a passenger train on the Chicago and Great Western road near Dunder, Iowa yesterday. She was seen by the engineer waving her little red apron as a signal. The engineer stopped the train and the little girl told him that the bridge around the curve was burning. The child was on her way to the pasture near her home to drive in the cattle.

Belle White, 23 years of age, daughter of Benjamin White, a wealthy lumberman, died at Wood’s Hotel yesterday morning about 10 o’clock while under treatment for the removal of facial blemishes.  Death was caused, it is supposed, by the use of cocaine to deaden the pain from the application of an electric current which constituted the means of treatment.

St. Louis is the “fighting-est” city in Missouri.

Springfield is likely to lose its old town clock.

Missouri crows because she leads all the other states in the number of barnyard fowls.

The tomato and salt cure for drunkenness is being spread abut in the Missouri newspapers.

A Clinton boy puts on airs over the other youths because he has smoked cigarettes until he has fits.

Sheriff Hancock left Saturday night for the penitentiary with Chas. Lee, John Wiseback and smokehouse Patrick. The two first were sent for two years each for larceny, the last five years for burglary and larceny.

People are slow to attach much importance to college diplomas, and Candidate Murray will find that a diploma from Keeley is of no more importance than one from Yale.

The editor left Monday evening for Kansas City and left the Herald in charge of the world, the flesh and the “devil.”  All parties having grievances will please send in their cards to the last mentioned.

Measles are almost epidemic at this place.

A remarkable article – namely fish flour – has been brought forward in the last few years. The flour is prepared from dried fish of the quantity, thoroughly desiccated, and then ground in a mill.

Some racy developments in the Anderson divorce case are liable to come to the surface before long. the defendant was in town the first of the week and swore out a warrant against his wife charging her with perjury.

The case against the Wilson boys charged with disturbance of the peace, was called Tuesday and continued until next Monday.

M.C. Reynolds and H.M. Curnutt are in St. Louis laying in their supply of fall goods.

All pupils in Chicago schools are required to be vaccinated.

A Kentucky man joined a bill posters’ association by mail to get $15 a day. He sent $1 membership fee and received a certificate which authorizes him to receive $15 a day if any other fool will pay it.