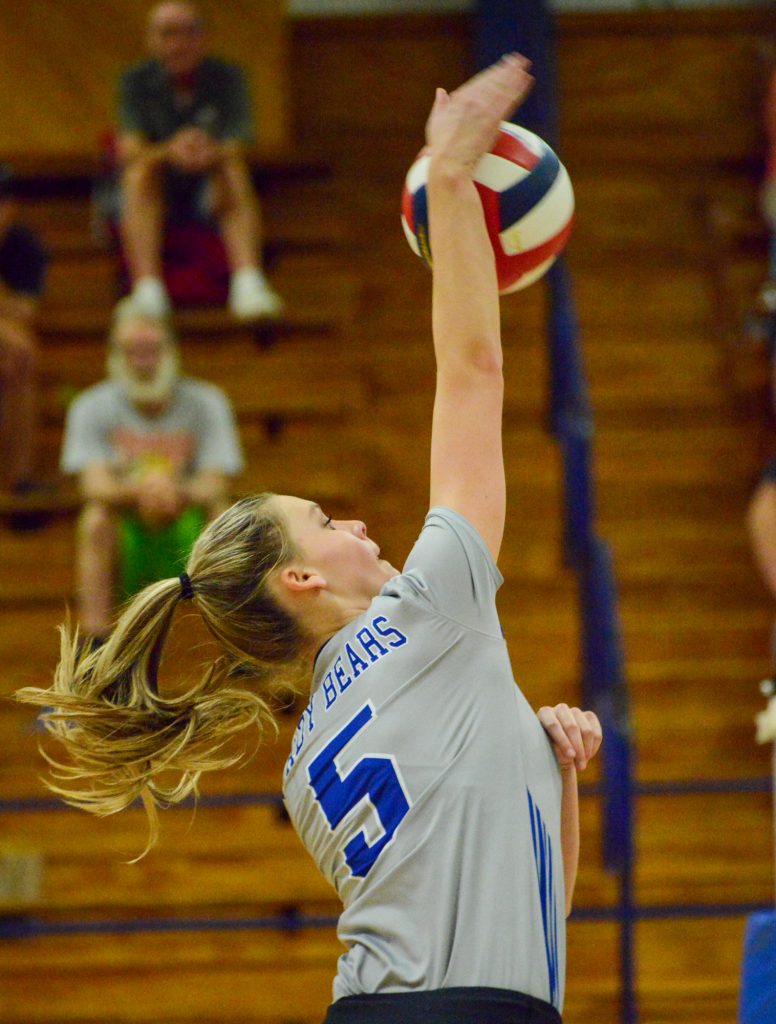 The Lady Bears put on quite the show of athleticism and drive Tuesday during their home contest against New Covenant Academy, hitting a milestone goal set by coach Emily Petty.

“The success over the weekend and today is that we are playing Lady Bear volleyball,” said Petty. “We’re playing to our speed, not letting the opponent run the court.”

The Lady Bears entered with an overall season record of 8-2, thanks largely to a successful tournament performance in Forsyth on the 14th.

At that tournament, the Lady Bears defeated Fordland, Sparta and twice over on Forsyth. A single tournament-opening loss to the Class 1 Blue Eye Lady Bulldogs landed them third place.

At 8-2, the Lady Bears stand on the top of the Class 3 District 11 totem pole, even over the 8-1 Springfield Catholic Irish. However, the Irish did hand Ava their first season loss on September 3rd. Even with a now 9-2 record, the district tournament crown is still up in the air at this point.

This season the Lady Bears have been resurrected not only in their winning season record, but in how they play on the court. Quick and determined.

New Covenant served first to open the match quickly taking up two points on tipped balls which went out on the Lady Bears. The third serve from NCA’s Macy Seevers went into the net for the side out.

A block by Claire Fossett didn’t go as planned, going out of bounds and turning service back to Lady Warriors. It didn’t stay with them for long when Fossett tipped the ball over into a gap to make the set 3-2 for the Warriors.

With Ava trailing 5-3, Sarah Dobbs led a quick rally to close the NCA lead to 6-5. Another sprint with libero Kaylee Downs serving up-ended the board putting Ava in the lead, 9-8.

“The girls are taking opportunities when they see it,” said Petty. “They’re doing a good job of listening to us,our play sets, and telling them what’s open, where to go, and what to do.”

The Lady Bears kept the narrow, one-point margin until the Lady Warriors nudged back to tie the set at 10.

The knot quickly unraveled with junior Laynie Isaacs on service, the team rallying for 11 points to take the wind out of the Lady Warriors with a lead of 21-10.

The final four points of the first set placed the Lady Bears apart with dives and sharply executed kill attempts. With the game point on the line Dobbs nearly went over the scorer’s table, successfully making the save on an errant dig by the Lady Bear defense.

That save went on to be the winning point after the Lady Warriors returned the ball over the net and out of the boundary.

“We stayed in control,” said Petty. “We weren’t afraid to lay out for a ball. We were intense and we were pumped to where our adrenaline was going. You can see that it was just static on the floor and they were really playing into their best.”

The Lady Bears held on to the rush from the first set and took an immediate 5-0 lead before NCA coach Lindsey Letsinger took a time out in frustration.

The break worked and stopped the five-point shutout with Isaacs serving the ball.

A return attempt by Hall went into the net, ending the Lady Bears’ streak, allowing the Lady Warriors to inch back but still trailing, 6-2.

Olivia Heriford, whose night involved more blocks and kills than one could count, picked up another three at service followed by Dobbs to take the lead further, 12-3. A dig attempt caused the loss of rally, but the Lady Warriors seemed to be done for the evening while the Lady Bears still had a serious drive.

“We have such a high expectation for these girls because we know the level and the quality of volleyball they can play,” said Petty. “It’s getting them to believe in themselves and each other. Once that all starts firing and they believe in each other and themselves, they lay it out on the floor for the team.”

The game went back-and-forth until the game was 23-17 with the Warriors slowly closing in on the Lady Bears. A solid kill from Heriford brought the ball back to Ava service and Fossett sent the ball over during the game point attempt.

Several returns and dives from both the Bears and the Warriors kept the ball in play until Heriford and Dobbs leaped up on the right side of the net with a solid block which went straight to the maple strips for an ecstatic win by the Lady Bears.

The Lady Bears travel down Highway 76 this evening to face a sore opponent in the Forsyth Panthers. Not only did the Lady Bears find success in the preseason jamboree, but they topped the Lady Panthers twice at their own home court tournament, winning 2-0 and 2-1.

After the Lady Panthers lick their wounds and look at the film, it is without doubt that the Lady Bears have the stage set for a competitive match.

“We’re traveling to an angry gym,” said Petty. We beat them once in pool play over the weekend and beat them in the third-place game to bring home that hardware. They’ve got our number. They’re going to be on fire, and for us, it’s going to be an intense game.” 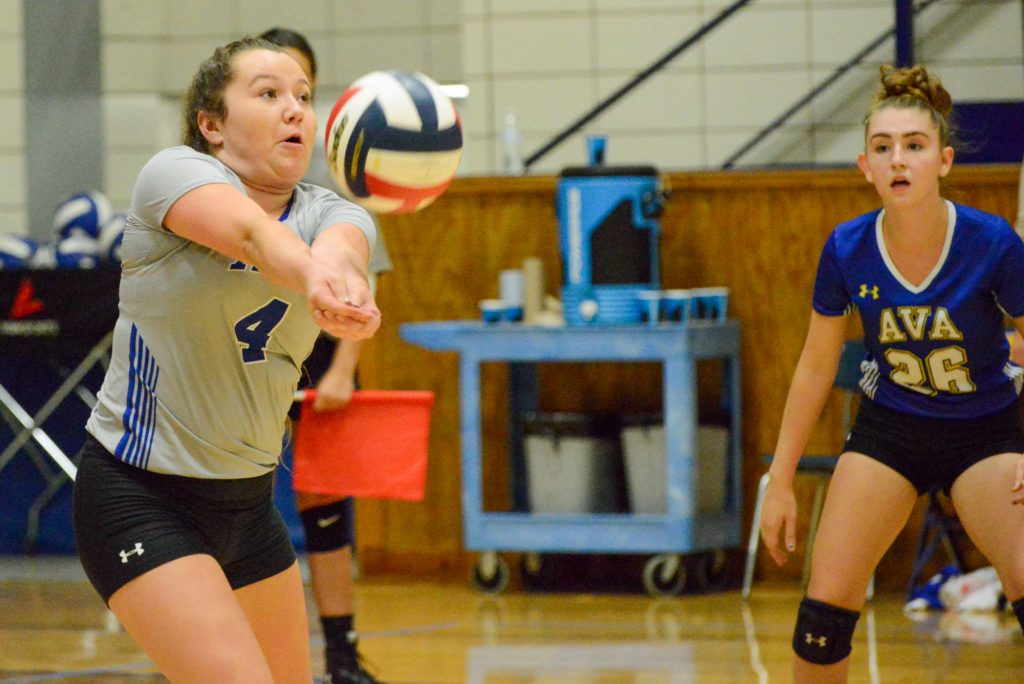 Senior Sydney Snelson (4) makes a dig during a match against New Covenant Academy on Tuesday, September 17, in Ava. (Jason Hoekema/Herald)