The new elevator in the Douglas County Courthouse is now in operation and working well, according to county officials.  The elevator was accepted by the county last Thursday afternoon, following a final inspection by engineer Royce K. Waters and Presiding Commissioner J.G. Heinlein.

About 40 Ava High School students gathered on the front lawn before school Wednesday morning for the annual “See You At the Pole” observance.  A large group of adults met across the street to show support to the students.

Ms. Randi Dye would like to announce the birth of her little sister, Danielle Autumn.

Two former Ava young women shared quite an exciting adventure during their summer vacation in June in California.  Kristy (Hutchison) Tackett was a guest in the home of Randy and Jayne Nash, Mission Viejo, where Randy is stationed with the United States Marine Corps in El Toro.  Besides shopping, the girls attended a taping of the Price is Right, in Burbank, Calif., where Jayne was chosen to be on contestant row. Jayne, with Kristy as her bidding helper, did very, very well and won many nice prizes, one of the grandest being a new Chrysler Concorde.

A retirement party with a patriotic theme was held in honor of Gene Clark Saturday, Sept. 17 at the Ava Community Center. Gene joined the U.S. Air Force in 1974 after graduating from Ava High School.

Dan Herrell, of Ava, has won in the first round of talent competition and is on his way to the Oct. 15 showcase at The Cannery.

MT. TABOR –– On Saturday, Caitlin Patterson celebrated her 4th birthday. The highlight of her party was when she received a pony, complete with saddle and all.  Her grandmother, Jean Curry, and her great grandmother, Myrl Cox, were among the guests. 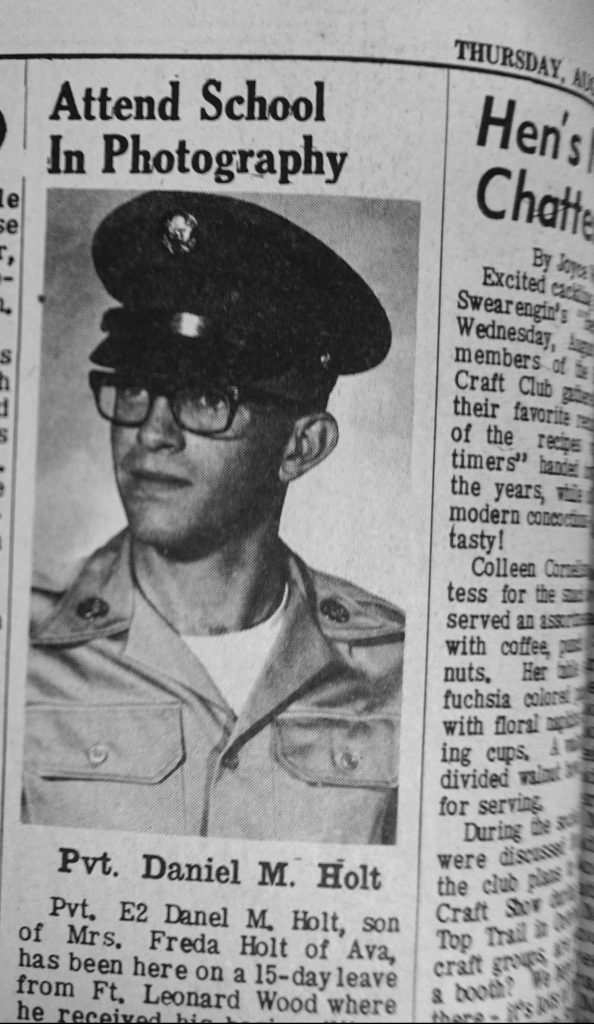 A.G. Spaldings Bros. Manufacturing Co., of Ava, announces the appointment of Larry Tucker of Squires to the position of process control coordinator, working under production control supervisor Warren Lindley. Mr. Tucker began his career with Spalding in September 1965 as a cutting department trainee. 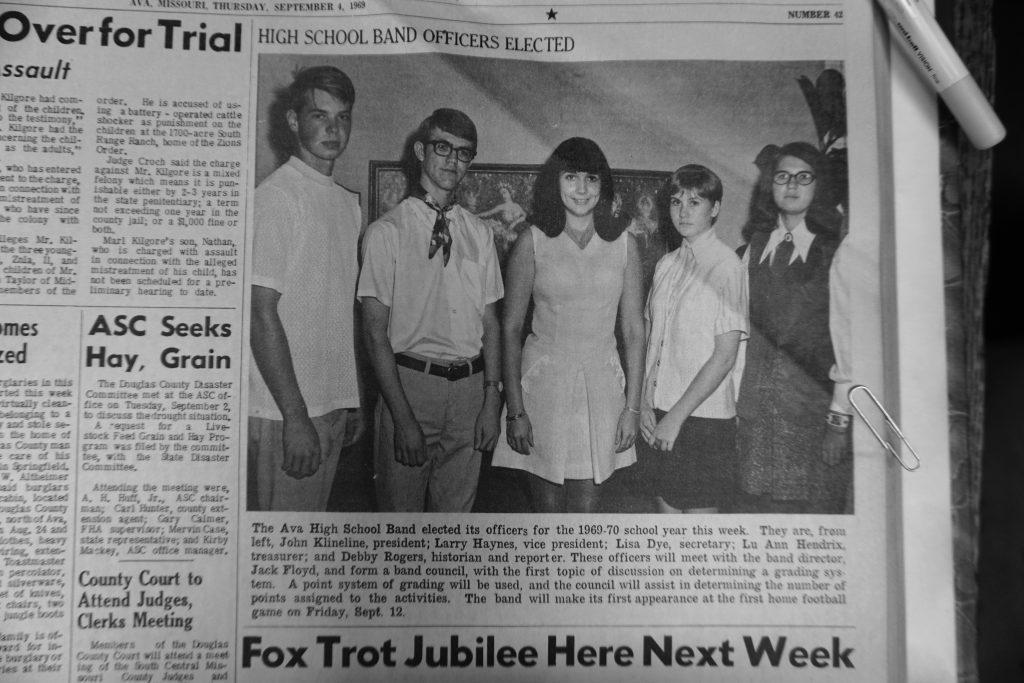 Leonard Wood where he is undergoing basic military training.

Work on the Spring Creek Church is progressing well with H. A. Robertson and Ernest Johnson as carpenters.

Miss Marjorie and Janice Robertson, who have been making the nine-week tour with the Southwest Missouri State College Chorale to 14 European countries returned to Springfield with the group Friday afternoon aboard an Ozark Airlines charter flight. Janice, who made the trip with the SMS group as a guest traveler, left home again Sunday enroute to Fort Worth, Texas, where she has enrolled in the Southwestern Baptist Seminary.

Mr. and Mrs. J. A. Owens of Ava will observe their 60th wedding anniversary Saturday at the MFA Hall in Ava.

Orville Hale, of Goodhope observed his 85th birthday last week. He retired recently from his job as machinist at Fasco Industries in Ozark.

Labor Day weekend, the last big holiday weekend of summer, attracted about 100,000 tourists to the Pomme de Terre lake area, Vern Mead, resident engineer reported.  Mead said the holiday turned out to be one of the best Labor Day weekend in several years as far as weather, safety and attendance are concerned.

West Plains police are investigating the theft of a woman’s wig from Carp’s Department Store. The wig, a mixed gray color, is valued at $29.40.  The manager of the store said the wig was believed to have been stolen. No arrests have been made.

Ozark, with Coach Larry Silvey, has no where to go, but up this season, reports the Bolivar Herald Free Press.  They were 0-8 in 1968. Ozark will go without much size and a lot of young players, but they return 17 lettermen and have an experienced backfield. The Tigers may still be a year away in the tough COC, but could come faster with the development of some of the younger boys, the newspaper commented.

Predominating in this term of court are divorce proceedings. Up to Tuesday evening, Judge Tom Moore had disposed of a large number of divorce cases, and had left several on the docket for consideration at some future date.  The next regular term of circuit court will be in January of next year.

Ellis Stores Company, Inc., have purchased the Sell building on the west side of the square in Ava and will rebuild within the near future, it was announced here this week by Al Westphal, local manager. The property was purchased from Mrs. J.H. Sell.  The Sell building was gutted by fire on the morning of August 5, with an estimated loss of 80% of the merchandise stock of the Ellis store, which occupied the main floor.

A green Ford sedan, stolen Thursday night last week from its parking place in front of the Basel Burke home in Ava, was recovered Wednesday by military police at Greenville, South Carolina. Several men are being held in connection with the theft, Army officials at Greenville informed Mr.  Burks in a telephone conversation Wednesday night. This is the second car theft for Ava in the past several weeks. A Ford sedan was stolen from the Jack Vinson home, and later found abandoned.

Sale of the Ava Produce Company this week to Steve Yates, another produce dealer in Ava, has been announced.  The Ava Produce Company is owned by A. L. Kropp and Charles Kellogg, and has enjoyed an enormous business for a town of the size of Ava, during recent years. Mr. Yates who becomes the new owner, has also been engaged in the produce business here for a number of years.  Ramey Smith, who recently purchased the property now occupied by Yates, stated yesterday he had no plans just now in regard to that property.

First Lieutenant Ruskin Norman, son of Mr. and Mrs. C.E. Norman of Ava, was one of 340 graduates of Northwestern University, Chicago, who received degrees there at commencement exercises last Thursday. Young Norman received the degree of bachelor of medicine.  He will now spend nine months in Wesley Memorial Hospital, Chicago, as an intern, after which he will be ready for assignment in the U.S. Army.

Mr. and Mrs. Winifred Durham announce the birth of a son, Billy Dwain, Monday morning at St. John’s Hospital in Springfield. Mrs. Durham before her marriage was Miss Doris Singleton.

Staff Sergeant Wade Hartley, 20, of Ava, who is in the European area has recently been awarded the air medal.

SPRING CREEK –– A baby girl was born to Mr. and Mrs. Glenn Hobbs Sunday, Sept. 17 and has been named Glenda Sue.

Paul Severns who has been in jail in Ava for the past few weeks on charges of forgery and who attempted to escape recently, entered a plea of guilty and asked for clemency. His punishment was assessed at three years in the state penitentiary.  J.S. Swearengin (Doc) entered a plea of not guilty to charges of gambling and was arraigned before a jury for a hearing. The jury found him guilty as charged and fixed the punishment at a fine of $25.  Linzie Bunyard who was being held for selling whiskey entered a plea of guilty and was fined $50 and costs, and 34 days in jail. Having already served the jail sentence he is now at liberty.

Bill of exceptions was filed in the case against Henry Huffman who was previously convicted for the killing of Fred Zerbst and sentenced to 15 years in the penitentiary, and who is now at liberty under bond to await the action of the Supreme Court on an appeal.

Lee Dyer will sell his household goods at public auction in Ava next Saturday preparatory to moving to Kansas City.  Roscoe Spurlock has bought the harness repair business formerly conducted by Mr. Dyer and will move the tools and machinery into the Ava Produce building.

The F.J. Northrup canning factory is making some good runs now, but the tomatoes are rather small because of the dry weather.

Miss Elinor Adams is filling the vacancy in the English department in the high school this week.

Misses Ethel Miller, Orla Mankin and Estella Berger departed for Springfield on Monday of this week where they will attend the Southwest Missouri Teachers’ College this year.

Aus Herrell of Oswego was in Ava this week.  Mr. Herrell was seriously injured about two weeks ago when in a run-a-way he was thrown from a loaded wagon with both a front and rear wheel passing over his head and neck.

The Farmer’s Produce Company has just received a car load of Michigan salt and can supply your wants in blocks or sacks of any size.

Lem Akins with his new jumping horse, electric lighted carry-us-all, will be at the Mansfield Fair.  The fair will have riding devices – merry-go-round, Ferris wheel and airplane flights.  A number of our citizens including some ladies are going up with Lieut. Snavely.

The sale of cigarettes in Springfield, Mo., has been stopped as a result of the efforts of Christian Endeavor societies.

JEFFERSON CITY –– Some time between 12 and 1:15 o’clock yesterday burglars forced an entrance into the state treasurer’s and auditor’s offices at the capitol. As the vaults were closed they did not secure anything of value. The town is overrun with tramps and hobos and some of them are supposed to have tried to better their fortunes at the state’s expense.

The refrigerator and brewery of the Krieger Klump Ice and Beer company at Rich Hill, Mo., were partially destroyed and the soda factory of J. W. Widener was entirely consumed by fire.

Every day there is made in the United States one glass of beer for every man, woman and child in the country.

Forty-five species of fish are found in Missouri waters.

The new corn cutting machine is severe on human legs.

In some dry sections, boys use potatoes as ammunition for their bean shooters.

Cape Girardeau has a sportsman’s organization known as the “Fur, Fin and Feather Club.”

It is reported the United States government will construct a stone dam at the mouth of the Osage.

A lot of school land in Bollinger County was advertised as for sale September 13, at “not less than $1.25 an acre.”

Profs. Platt and Kay of the Mansfield Schools were in town Saturday renewing acquaintances. They report school at the place is in a flourishing condition.

Dr. M. H. Osborn of Roy has rented the Silvey residence and will move to Ava in a short time for the benefit of the school.

We understand that Martin Singleton has rented his hotel property to Mr. Zumalt of Mansfield.

Jos. E. Sell has bought a half interest in the Allen Miller blacksmith shop where he will be pleased to meet his old friends and many new who need work in that line.

Smith Hatfield, the all around bad man, who has but recently returned from a four years visit at Jefferson City, undertook to smear the town in fantastic colors last Friday, and as a result rounded up endurance vile. While the town was taking a recess at the picnic on Saturday, he pried the door of the cage open and once more inhabited the sweet ozone of liberty. Douglas County bids him God speed, and is not particular about meeting him before we gather on that beautiful shore.

Deputy U.S. Marshal Johnson of Springfield was down the first of the week, and arrested Sam Whitaker for selling whiskey without license.

No one can broaden his own views by spreading himself.