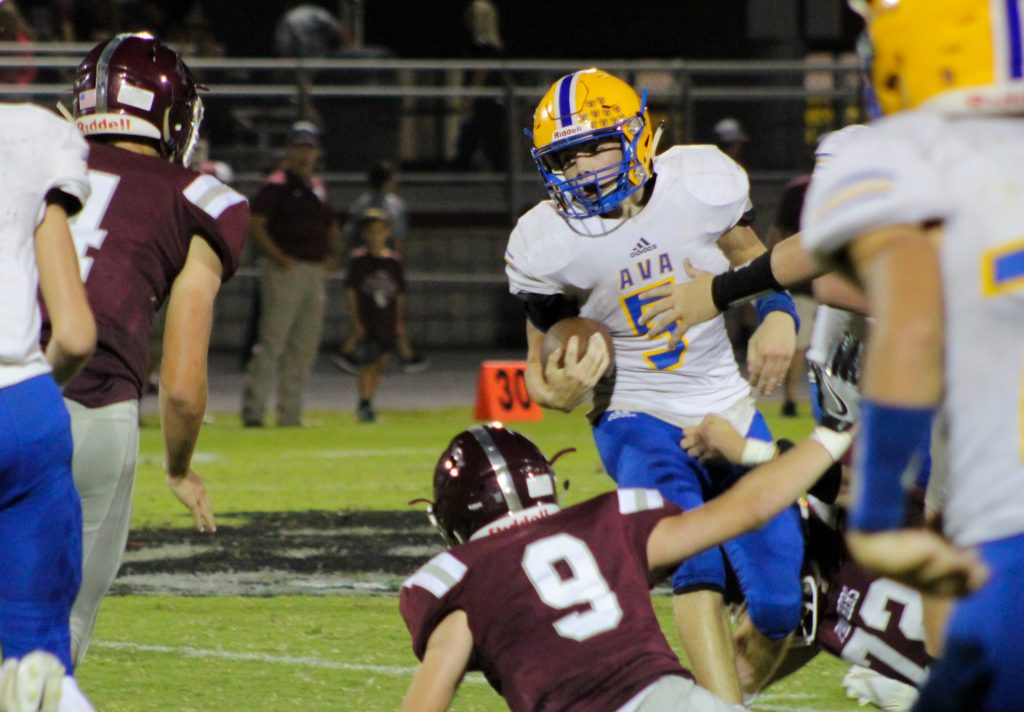 MOUNTAIN GROVE – The Ava Bears hit Highway 60 to take-on a bitter SCA rival and hand them their fourth loss in the last three years. It hasn’t always been pretty for the Bears, but their record against the Panthers continues to improve to 5-8 since 2010.

The first quarter was pretty quiet with the Bears pulling ahead by six thanks to a 39-yard touchdown from Nate Swofford. The Panthers were able to keep Spencer Skyles out of the end zone during the two-point conversion attempt.

The Panthers hogged the ball during the first half, topping Ava’s 4:27 of possession time with nothing to show but two punts and a big sack from Ava’s Mason Cole during the Panthers’ first possession.

However, the Bears didn’t fare much better until Swofford broke free with 2:36 left in the first. The Bears faced a sack, a fumble (which they did recover for a loss of six), and a punt on top of just 42 offensive yards.

Those yards nearly didn’t matter going into the half after Mountain Grove came up with a 46-yard touchdown by quarterback Rhett Wakefield. The Bears gave up a total of 40 yards in penalties.

With 71 offensive yards in the first half, mathematically the penalties left the Bears with 31 positive yards and converted the first down just once on a three-yard carry by Myers in the first quarter.

“We just kept getting penalties,” said coach Dan Swofford.  “We had guys going the wrong way. Mental mistakes. That was our biggest thing and putting ourselves in that hole. We’re not an offense that does well with first 15 or second and 12. When we get behind the chains we struggle. We’re just not made that way. Not many offenses are.”

Possession time in the second quarter was limited to just under four minutes of the Bear offense working on the field. In the other eight minutes of game play before the break the Panthers scored a touchdown to tie and managed to convert first downs three different times.

Not taking away from the success the team had on Friday, but the gauntlet only gets tougher as the season progresses.

“We want to get better than we were last week,” said coach Swofford. “We were not, and we certainly need to get better this week. I just didn’t think we played very well tonight.”

The Bears moved into Friday’s game undefeated although facing tough opponents in Buffalo and Hallsville while the Panthers came in at 0-2, but these games can all be for the taking if Ava isn’t careful.

Liberty-Mountain View took on a 47-20 loss to Thayer on Friday, another undefeated team which the Bears face on October 11. Giving up 40 yards in penalties will cost the Bears dearly if it is against Thayer, another SCA Conference rival.

Things looked better for the Bears in the second half. Out of the gate Myers charged for 11 yards for the Bears’ first, first down of the game. He pushed up another three to the Bears’ 38 before Swofford scrambled through the Panther defense for a 20-yard gain to the Panthers’ 42.

The Bears’ made it no further than the 35, forced to turn over the ball after failing to convert on fourth down when a lateral to Skyles led to a nine-yard loss.

The Bears’ defense spent the next 3:37 keeping the Panthers at bay, forcing a punt with 3:53 left in the third quarter. They quickly turned the ball back over thanks to a ten-yard penalty for a hold on third-and-five at their own 30.

A stroke of luck blessed the Bears when the Panthers fumbled on the following possession, pushing them back to their own 22 when Swofford made the recovery. With the Bear offense back on the field, they made the 22-yard drive for a touchdown by Myers who rushed for two into the pay dirt with 0:29 left in the third.

The Bears failed to convert the extra point, but now led 12-6.

The Panthers came unhinged in the fourth quarter where they started on their own 33. A major sack from Myers set Mountain Grove back by ten, putting them at third-and 18. Wakefield rushed for three, but the ball was kicked back 53-yards to the Bears who started with a fresh set of downs on their own 24.

Myers converted for the first down with a 13-yard gain, followed by an additional 29 yards on a quarterback keeper by Swofford. Myers rushed for another eight to the Panther 28, before things came apart with a stripped ball on the one-yard line.

The Panthers recovered, but with terrible field position. On first down, deep in their own end zone, the Ava defense broke through forcing Wakefield to toss the ball. A penalty was called on the play, an intentional grounding and a safety fin favor of the Bears; increasing the lead, 14-6, with 1:39 left in regulation.

The Panthers attempted to maintain possession of the ball with a squib kick that bounced-out at their own 22.

Ailed by terrible field position, the Panthers gave up another six points after Skyles stiff-armed his way for eight yards plus four from Myers putting the Bears on the Panther 11 with a fresh set of downs.

A carry for nine by Swofford and a two-yard scoot by Myers put the Bears well ahead with just 0:38 left in the game. In their third attempt to put extra points on the board, Myers attempted a field goal, which failed leaving the Bears to be happy with six points.

With 109 all-purpose yards in the fourth quarter, the Bears turned-up little in comparison to their drives against Buffalo and Hallsville.

In the second quarter against the Indians, a total of 93 yards net the Bears 14 points and 109 yards in the second against Buffalo brought the Bears eight points.

The Mountain Grove sideline delayed the Bears inevitable victory with time outs at 1:34 and 0:43, and the rest they say… is history.

The Bears cut-down their yard losses to just 10 on penalties in the second half, the subject of the halftime locker room discussion.

“We had to stop it,” said coach Swofford. “They were effort penalties in a way. You might say that jumping offsides… they’re just things where you’re wanting to beat the guy, you want to get the best block you can, and you just give too much. We can’t do that. That’s what puts us behind the chains.”

The Bears move onward, 3-0, to face the Eagles Friday evening in Mountain View. Coach Swofford knows that any team can bring the heat to the field and that the Bears must be ready to keep moving forward, not backward, if they plan to continue their success this season.

“(Mountain View-Liberty) are 0-3 but were beat by a good team tonight, and they almost won against a good Class Four team. We have got to watch them; they’ll be ready for us and playing them over there is even tougher.”