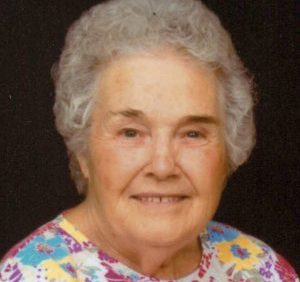 June Ross Thompson, 83, of Ava, Missouri, passed on to Heaven on September 2, 2019 at her home with her loving family by her side.

Vonda June King was born on June 7, 1936, in Douglas county to Clarence and Ada Opal (Walker) King,  in the middle of the Great Depression. She was raised to appreciate everything that she was given and to use it to the very last drop,-and she did!

She fell in love early in life and married a local business man, Jesse Ross and they were blessed with five kids, Randy, Larry, Calvin, Janice (Jan) and Janet. Unfortunately, June was widowed young, but her strong work ethic did not let her stress. Instead, she worked hard and prided herself for always having a hot meal on the table for her kids and whoever else may wander over for supper that evening. June was known for her cooking, especially her blackberry and gooseberry cobblers, however her apple pie was pretty delicious too!

After successfully raising her five children, she remarried Gene Thompson and lived in the Goodhope area until Gene’s final days. Afterwards, June chose to move back to Ava, to be closer to her kids and grandkids.

June never quit working and often talked about her days spent working the belt at Rawlings, wrestling shoulder pads and packing football helmets, gloves and baseballs. She retired there after 29 years. She often had pain but never complained because she was thankful for the job. Her evenings always consisted of cooking supper, sometimes numerous times. She loved summertime and enjoyed gardening and canning and taking care of her chickens. June passed her love of gardening and preserving down to any person who would take the time to learn from her. June also loved picking blackberries and always found them ‘bigger than her thumb’, but bless her heart she was so petite, they ALL were bound to be bigger than her thumb.

She had a fierce desire to protect her family which they took full advantage of because June could kill a snake quicker with a hoe than most could with a gun. A weatherman of sorts-the first cloud in the sky, she swore it would rain. June always opened her home up to everyone. She was truly one of a kind.

June was proceeded in death by her parents, her husbands; Jesse and Gene, a son-in-law Garry, and  siblings, Ralph, Lloyd, and Donald King, Virginia “Sis” King and Minnie Potter.

She is survived by all of her children, Randy Ross, Larry Ross, Calvin Ross, Jan & Joe Cox, and Janet Claussen, two step children, J.D. & Judy Ross and Joan & Larry Allen, three sisters Geneva Hodges, Betty Scott, Mary Hesterlee, two wonderful daughter- in-laws; Pam and Sandy, the apples of her eyes, her grandchildren; Jess and husband Jonathan Harley, Sarah and husband Tommy Peterson, Jalyn and husband Nicholas Miller, Colten Ross and Koleder Ross and wife Lindsay, and the ones who were better than her grandkids, her 5 greats-Jentry, Jaxton and Jennings Harley and Ryder and Mackenzie Miller, nieces, nephews, and a host of other relatives and friends.

Funeral services for June were Saturday, September  7, 2019 at 10:00 a.m. in the Clinkingbeard Chapel, Ava, MO with burial following in the Ava Cemetery. Visitation was Friday, Sept. 6th from 6:00 p.m. to 7:00 p.m. in the funeral home. Officiating was Pastor Marvin Loftin. Memorials may be made to American Cancer Society or American Heart Association. On line condolences may be made to www.clinkingbeardfuneralhome.com.