The Rawlings Caravan will be at the annual Rawlings company picnic at the Ava City Park this Saturday, and the public is invited to come by from 1 o’clock until closing and see the various demonstrations and exhibitions offered in this unique museum on wheels.

On Sept. 10, friends and family of Earnest Cantwell gathered at Buck Creek Park to surprise him and help him celebrate his 60th birthday.

Tyler and Trevor Watterson are proud to announce the birth of their sister, Makenzie Dawn.  She arrived on Friday, Aug. 26 at 4:51 p.m. at St. John’s in Springfield. She weighed 7 lbs., 5 oz., at birth and was  19 inches long.

Seth Schroeder accompanied by his mom and dad, Mr. and Mrs. Rick Schroeder) and sister Delaine attended a birthday party at the Ava McDonald’s held Sept. 1 at 7 p.m. in his honor. 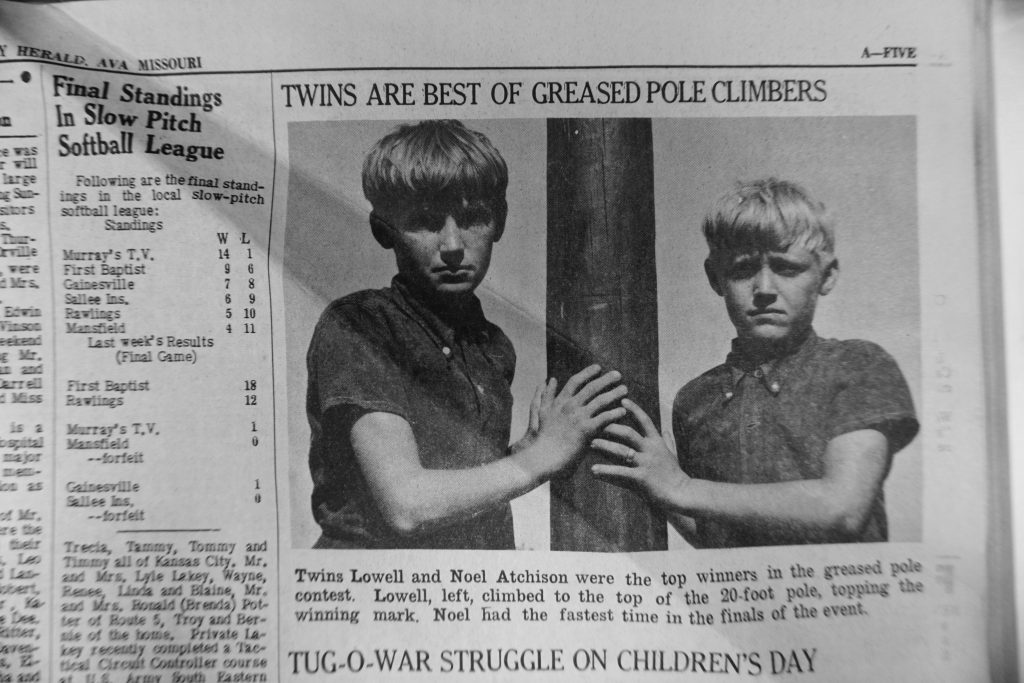 Archie R. Douglas, 50, a resident of the Oak Forest community, Clay Township, assumed the office of county assessor Monday, Sept. 1, replacing Garnett Kelly who was assessor for several years. Mr. Douglas, a farmer and veteran of World War II, is a lifelong resident of Douglas County.

Southwest Missouri State College’s mixed voices choir of Springfield was awarded top prize in the International polyphonic contest August 21, taking a silver cup for the best mixed voices choir.  Miss Marjorie Robertson of Ava is making the tour as a member of the SMS Chorale and her sister, Miss Janice Robertson, is guest traveler with the group.  The Misses Robertsons are the daughters of Mr. and Mrs. Clifford Robertson of 316 NW 4th Street. 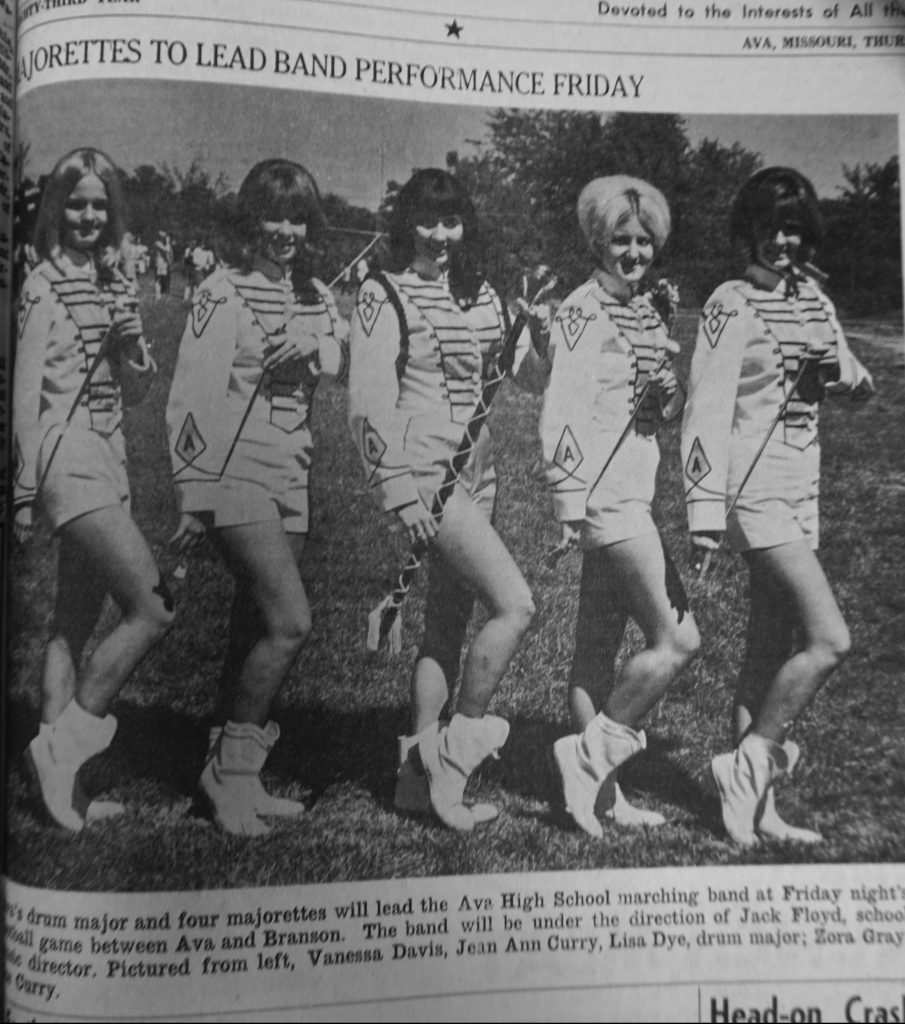 “Seersucker” is the name of a type of fabric; it is also a name for the fellow who believes completely in fortune tellers.

At the fair, twins Lowell and Noel Atchison were the top winners in the greased pole contest. Lowell climbed to the top of the 20-foot pole, topping the winning mark. Noel had the fastest time in the finals of the event.

Mr. and Mrs. Garth Halstead of Ava will observe their 50th wedding anniversary on Saturday, Sept. 6.

Sgt. Charlie R. Herrell arrived in Ava on Wednesday night last week to spend a 30-day leave with his parents, Mr. and Mrs. C.V. Herrell of 501 West Washington Avenue, after completing a one-year tour of duty in Vietnam.

LITTLE CREEK –– Joe Taber and Glen Tylson went to western Kansas last week to pick up a couple of horses.

Anyone who doesn’t believe in witches hasn’t seen our neighbor’s wife. 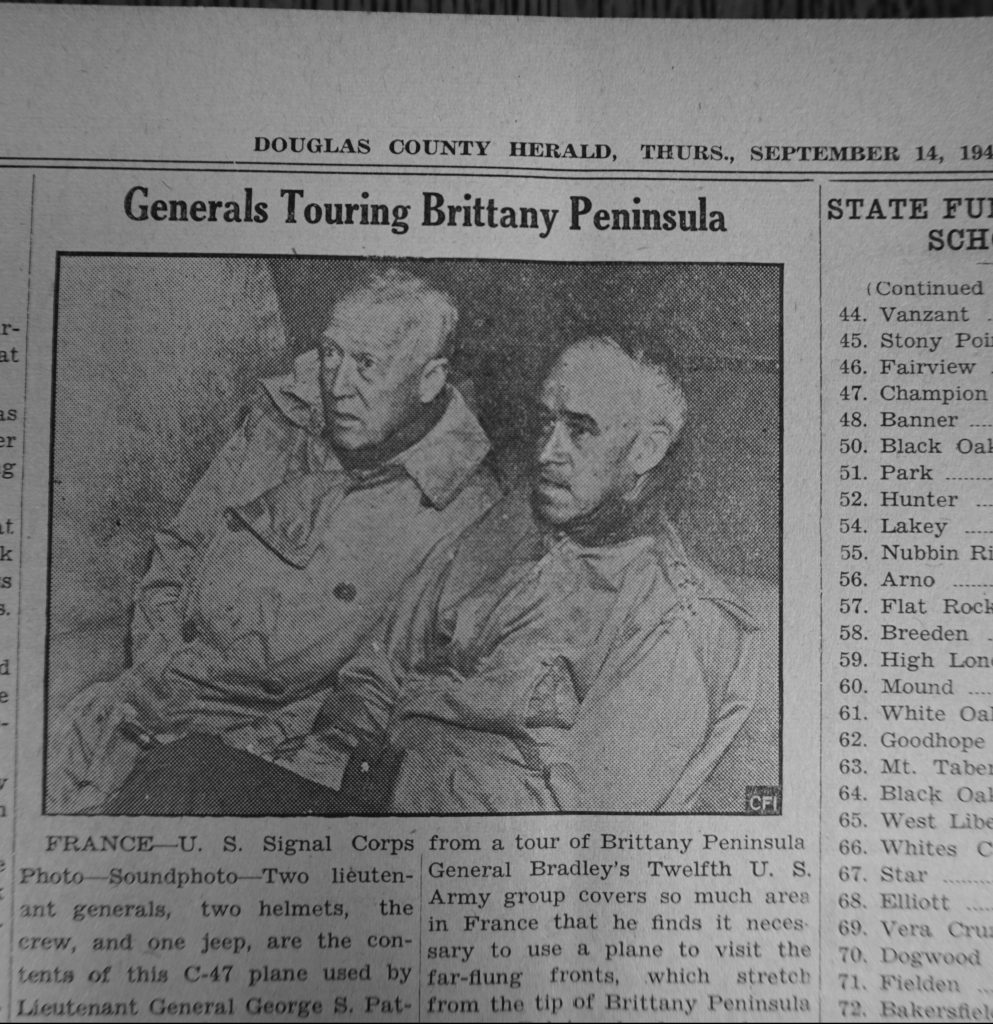 Allied forces from the west and the Russians from the east, have carried the war onto German soil during the past week. That means that the two-way invasion of the Reich is almost at hand.

Byron Rackley, 21, of the east end of Douglas County south of Cabool, was adjudged insane at an adjourned term of court here Thursday last week, and taken immediately to Hospital Number 3 at Nevada, Missouri.  Rackley was apprehended by Springfield officers when he appeared at the Springfield airport and attempted to commandeer an airplane. When taken in charge there, he told officers he wanted the plane to fly to Washington to kill Hitler and Roosevelt. He had heard that Hitler was in Washington, and wanted to kill him and then kill Roosevelt.  Sheriff Don Souder and deputy Ray Singleton went to Springfield to bring Rackley here.

Otis Strong of the Sweden community has claimed the bounty for two wolf scalps which he trapped recently, bringing the total trapped in Ozark and Douglas counties to five in the past several weeks.

QUANTICO, Virginia –– After more than two months of highly intensive training, Marine Private First Class Ralph C. Dobbs of Bertha, has graduated from officer candidates’ class here and has been commissioned a second lieutenant in the Marine Corps.

LITTLE ROCK –– Dedication ceremonies for the huge Norfork Dam, near Mountain Home in Baxter County, tentatively set for October 17, have been postponed indefinitely because of travel and rationing restrictions.

Discriminating taste and careful thought was used in selecting “God’s Half Acre” by the early settlers from Virginia who founded homes in Missouri.  Next in importance to choosing the home site was that of the family cemetery which was often on a hillside with stately pine and cedar trees ornamenting the chosen spot and suitable monuments marking each grave.  Here family members were laid to rest amid scenes of their former activities, in the place they loved and were beloved.

The old Singleton Hotel building located on the northwest corner of the public square in Ava, one of the most dangerous fire traps in the city, caught fire late Wednesday afternoon; and but for the city’s new fire apparatus would likely have been consumed by the blaze.  The chemical fire engine was ready for action and was immediately put into use. Had this building burned it would have been almost impossible to have saved the row of wooden structures extending westward from the old hotel, as well as the new garage building just to the north.

$500 is the amount offered for premiums at the Douglas County fair to be held in Ava, October 2-4.  A decision was reached by the premium committee last week to offer this amount as an inducement for a big display of farm and household products.

Prof. G. Arney of Bethany, Mo., has been employed by the Board of Education to take charge of the vocational agricultural course in the Ava High School.

A New York man who put four nickels in a telephone slot during a 35-minute wait, and even then did not get his number, was arrested for pulling the wire out of the phone. It is doubtful if any jury would convict him, technically guilty, though he was.

Wm. Morris is moving his stock of goods from the Herald building into the Ava Grocer building this week.

C.C. Coffeen and Chas. Judd motored to Springfield the first of the week and contracted for the agency of the Studebaker car in Douglas County, returning with a demonstrating car.

A hail storm in the southern part of Laclede County is reported to have done enormous damages on Tuesday evening last week. The hail and sheets of ice measuring five and six inches long fell for ten minutes and was followed by a downpour of rain.  Roofs of houses and barns in the vicinity of Peas Mill were damaged beyond repair. Many chickens and small animals were killed, and corn crops were beaten to the ground.

Everett Bacorn who has been working in Oklahoma came tearing in one day last week on his two wheeled car.

ROCKBRIDGE –– Parrot Gardner and family, and Landon Gaulding and family, accompanied by Mr. and Mrs. Frank Mahan, motored to Mountain Grove and back last Saturday. 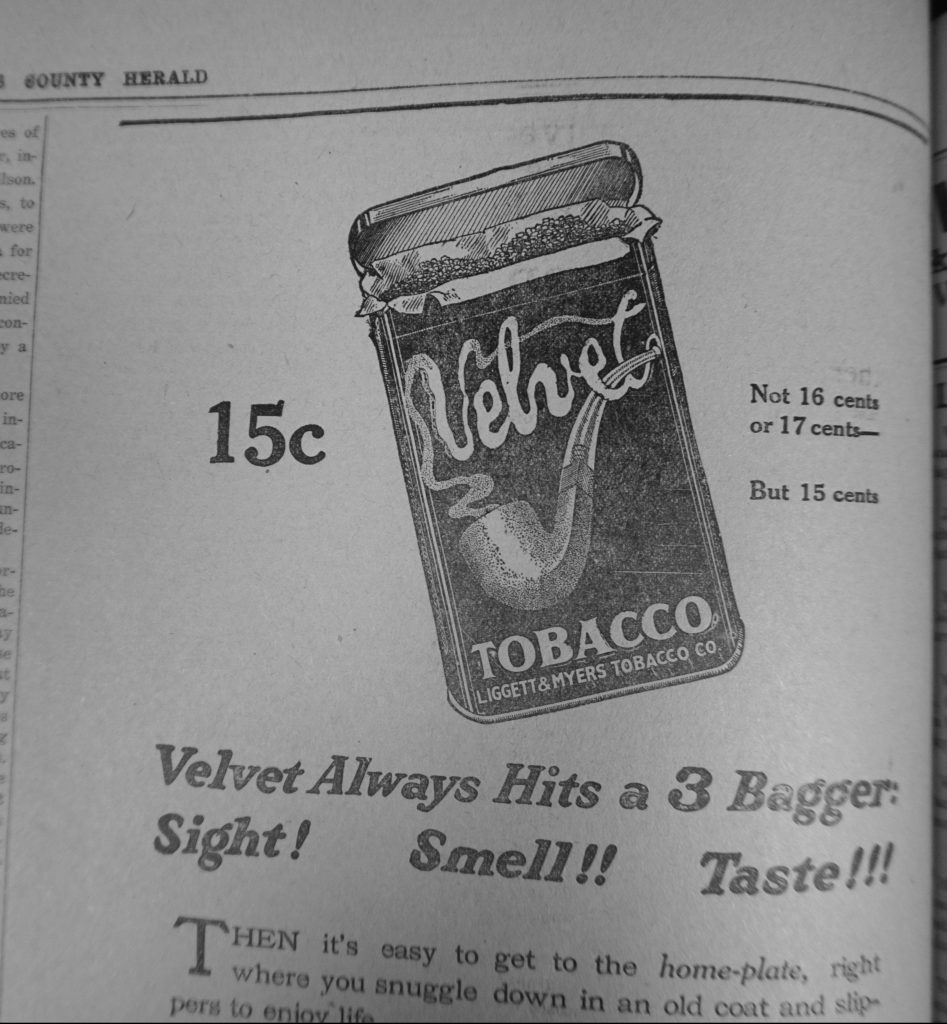 The telephone line is completed between Humansville and Hermitage.

Rev. Charles Clancey of Frontier, Mich., was tarred and feathered and rolled down a steep hill by four masked men, some of them husbands who did not like the minister’s style.  All the time he was shouting “Praise the Lord!” and “Glory to God!” and it is said his cries were heard a mile distant. He has made no complaint to the authorities as yet.

Some fine writing is being done for the Missouri papers under the head “It Rained.”

The Normal School in Chillicothe opened with 300 students, most of the new ones.

Apple buyers are telling all sorts of stories as usual, to induce farmers to sell their fruit on the tree at bedrock prices.

The first railroad built in Missouri was in Callaway County. It extended from Cote San Sessein back a few miles to the coal mines.

On Mr. Child’s snake farm in Ozark County the big rattlers are kept in a pen 20 ft. square, while the others run around like chickens.

If the Kickapoo Shows in Missouri continue to increase in number at the rate kept up for the past year or two there will be few lazy Indians left on the reservations.

The great auditorium in the Marvel Cave has been put in shape for public meetings. It is a room containing 4,000,000 cubic feet of space, with a roof 150 feet high, unsupported by a single column or pillar.

Fishing in the Osage is not what it used to be. Set nets at the mouth of the river have prevented the fish from going up, and dynamite fishing has been carried on until nothing is left worth catching.

The Elmore stock of goods at the old Curnutt stand was closed out this week by creditors.

W. F. Reynolds & Co. are fitting up a new billiard hall on the west side of the square.

Geo. Keller of Clinton Township was tried before Esquire Snyder on Monday charged with a felonious assault on one W. F. Pearson. The testimony not being sufficient, the defendant was discharged.

The Farm Record of last week is filled with many blind assertions and malicious falsehoods of such a character and from such a source as to be totally unworthy of notice.  The intelligent people of Douglas County are already well aware of the rottenness of its management and of the ungentlemanly policy it has so far pursued in the present campaign.  The Grand Jury meets next Monday and Bro. Murray is invited to present his charges before that body.

The first term of the Thornfield Normal and Business Institute opened Sept. 4, with more than double the attendance of corresponding day last year and several enrolled during the week.

For a lame back or for a pain in the side or chest, try saturating a piece of flannel with Chamberlain’s Pain Balm and binding it onto the affected parts. This treatment will cure any ordinary case in one or two days.  Pain Balm also cures rheumastism. 50 cent bottles for sale by Dr, J. H. Murray.