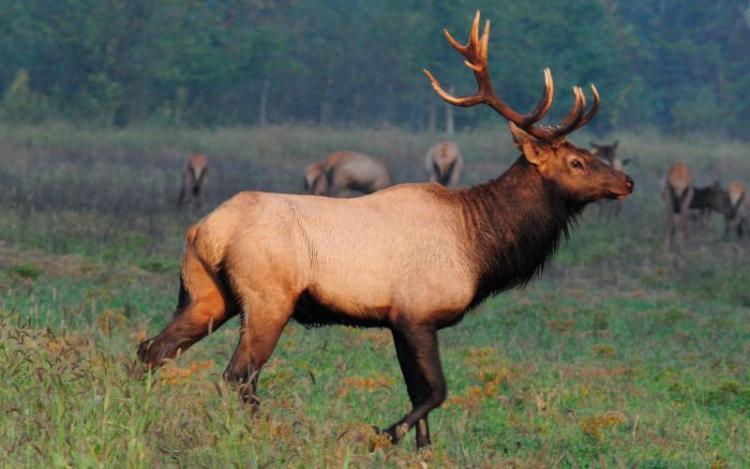 Register in advance at short.mdc.mo.gov/ZMb and then view the live webcast from a computer or mobile device.

JEFFERSON CITY – Join Missouri Department of Conservation (MDC) on Wednesday, Oct. 9, from noon to 1 p.m. for its Wild Webcast on Elk and Elk Hunting in Missouri. Get information on seeing free-ranging wild elk in Missouri and on Missouri’s first upcoming elk-hunting season, possibly starting as soon as next year. MDC experts will share information and webcast participants can post questions through the webcast.

Elk are a native species in Missouri but became extinct in the state during the late 1800s through unregulated market hunting. MDC reintroduced elk to Missouri by capturing and transporting 108 wild elk from Kentucky to a remote area of the Missouri Ozarks in 2011, 2012, and 2013. Elk numbers have grown, and their range has expanded to cover portions of Carter, Reynolds, and Shannon counties. MDC offers driving tours to see elk at Peck Ranch Conservation Area and Current River Conservation Area in the Missouri Ozarks.

MDC will begin offering Missouri residents a limited season for hunting elk once the herd of about 175 animals reaches a minimum of 200 with an annual herd growth rate of at least 10 percent and a herd ratio of at least one bull elk for every four cow elk. According to MDC research, the herd will likely reach 200 animals by 2020.

Learn more through the MDC Wild Webcast on Elk and Elk Hunting in Missouri on Oct. 9 from noon to 1 p.m. Register in advance at short.mdc.mo.gov/ZMb and then view the live webcast from a computer or mobile device.