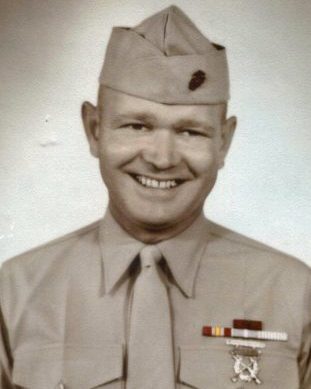 Al was born October 11, 1933 in Oceanside Long Island, New York to Alfro Edwin and Ida M. (Warren) Shaw. He was a retired First Lieutenant from serving in the U.S. Marine Corp for 30 years. He served his country in the Korean War and the Vietnam War.

On December 9, 1995, Al and Carol (Somers) Empie were united in marriage in Fultonham, New York.  Al was a Christian and lived a Christian life. He enjoyed hunting, fishing, and farming. His greatest joy was spending time with his beloved wife Carol and family.

Al was preceded in death by his parents, a daughter Julie, two brothers, George and John, and a grandchild, Bud.

He is survived by his wife, Carol of the home in Ava, five children, Amy Stuart and husband Michael, Ellsworth Shaw Jr., and Viola Bielby and husband Peter, Jim Empie and wife Donna, and Paul Empie and wife Molly, all of upstate New York, several grandchildren and great grandchildren, two siblings, Edwin Shaw and Audrey Jeffers, all of New York, and many other relatives and friends who will miss him greatly.

Funeral services for Al will be Monday, September 16th at 10:00 a.m. in the  Clinkingbeard Chapel, Ava, MO with full military honors by the Troy Herd American Legion Post 112 and U.S. Marine Corp at the funeral home.  Visitation will be from 9 a.m. to service time. Officiating will be Pastor Oren Alcorn.  In lieu of flowers, memorials may be made to Hospice Compassus or the Alzheimers Association. On line condolences may be made to www.clinkingbeardfuneralhome.com.