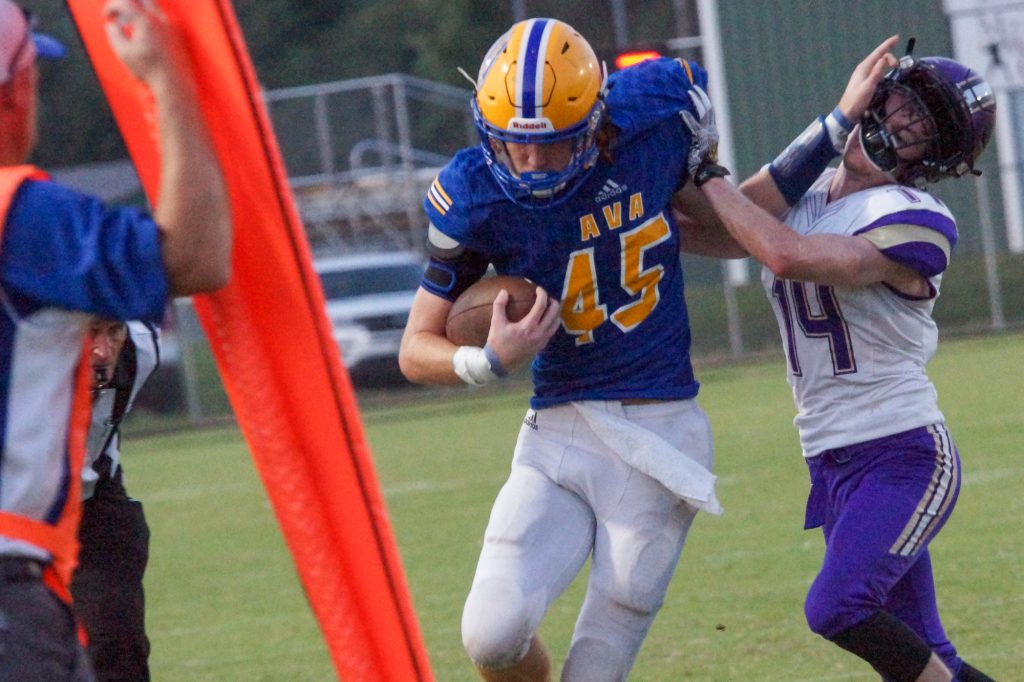 “As cliché as it is, they have heart.
They don’t have any give up.”

In their second game of the season, the Ava Bears football team may have given their fans a reason to watch their blood pressure. For the second week in a row, the Bears have put on a heart-stopping show of athleticism on the gridiron.

The Hallsville Indians won the toss and elected to receive the ball while Ava defended the northern side of the 50-yardline. Kayden Myers sent the ball to the Hallsville 49 where the Ava kicking team stopped the return.

In the first play of the game, the Indians played an ace from their hand with a pitch from quarterback Jake Ashburn to utility player Cooper Crane for a gain of 27 yards.

Now on the Ava 24 with a fresh set of downs, the defense needed to hold the Indians or risk trailing early in the contest. A 12-yard keeper by Ashburn moved the chains deep into Ava territory.

Quickly reading the relationship between Ashburn and Crane, the Bears defense were able to start managing the Indians despite their large gains. Crane was held to two yards from the Bears’ own 12-yardline.

The Ashburn-Crane connection managed another six on the option, putting the Indians on the Ava four.

“We’ve got to be ready for that that same type (of) running back,” said head coach Dan Swofford, speaking of Crane. He did a great job of getting downhill. They were hard to tackle, both (Crane and Ashburn) were. We talked about that this week, and I think we learned a great lesson about when a coach says a guy is a hard to tackle, they better hear that a little better than they did this week.”

With 10:12 left in the first quarter the Indians pulled ahead by six with a touchdown from Ashburn with the keeper.

Ava is a specialty team when it comes to making (and denying) two-point conversions. The Bear defense quickly stopped the attempt, keeping the damage done to just six points.

“The other team played really well,” said coach Swofford. “The thing that comes to my mind is (that) they were better than I thought they’d be. I think they were a lot better than our kids thought they’d be. I knew they were pretty good, but they executed well. They were very athletic up-front, and we struggled with them. With all that said, I’m really impressed with our boys coming back to find a way to win. And that’s something to be said right there.”

It was time for the offense to fire up and return the favor, but with just over two minutes of time on their first possession, the Bears were forced to punt after the Indians held them to just three yards at their own 40-yardline.

Myers delivered a 30-yard punt to the Indians’ 30 where Hallsville started-off with a 29-yard burst by Ashburn to erase all the ground made by Ava’s punt.

Ashburn tacked-on another ten yards, prompting a chain measurement which determined a new set of downs for the Indians on the Bears’ 31.

Ava received a few breaks, though. A procedural penalty from the Indians set them back five yards to the Bears’ 28. Then came a fumble forced by the Bear defense and a recovery by Dylan King.

With 5:36 to go in the first, the Bears quickly made a 51-yard gain with Swofford keeping the ball and rushing up the left to the Hallsville 10-yardline. A quick pitchout to Josh Bray pushed the offense up another seven yards, leaving Swofford to close the gap for the Bears’ first touchdown of the game.

The two-point conversion was good, putting Ava in the lead, 8-6. Two penalties on the Indians foiled their offensive attempts and kept them at their own 36. A sack on Ashburn put the Indians in a 4-10 situation where they punted it away.

With 1:53 left in the first, Ava saw its own hiccups with a holding penalty which set them from a 2-2 situation to a 2-20 because of the spot foul. A small gain of seven put the Bears at 3-13, but Swofford was tackled for a loss before the horn signaled the end of the first with Ava leading, 8-6.

The second quarter was much more productive for both teams, each scoring 14 points to keep Ava ahead by two at the half. Ava started with a drive for 30 yards to put Myers in the spot to truck his way through to the pay dirt from the Indian 3-yardline. The Bears’ conversion attempt was foiled, but the Bears had extended their lead, 14-6.

The Indians followed with a sloppy possession where a block in the back erased a pitch out for 36-yards and a touchdown. The setback was only temporary with a 34-yard toss to Mason Huskey for six. The Indians picked up the extra two points in spite of another penalty call to knot the game at 14 apiece.

“I don’t know if we played good defense,” said Kayden Myers. “I think that it could be improved by a lot. I think we need to prepare a little better, but it was a good win in the end.”

Ava’s next possession lasted nearly six minutes. Things looked dire on the Indians’ 32 where the offense was nearly stopped cold. Swofford was sacked for a loss making the next play a fourth and seven on the 34.

Then Swofford threw a bomb out to Zach Mendel who made the clutch catch for a 28-yard gain. Now on the Indians’ 6-yardline, a touchdown from the Bears was inevitable. Myers ran-in the final yard for six, followed by Spencer Skyles who carried the pigskin for the two-point conversion. The Bears now led 22-14.

“I tell everybody we don’t (pass),” said coach Swofford. “With that said, we work on (passing) constantly because when you can have these tight games with these types of teams, they’re trying to take away our run. We’ve got to be able to pass and we’ve got to be able to catch it. And so yeah. Nate had a big pass down there and Zach had a big catch.”

The Indians made good in the last two minutes of the half with a 64-yard drive ending in with a 32-yard Hail Mary for six more points. The Indians failed to convert, leaving the halftime score with Ava on top, 22-20.

After the half, both teams blanked each other in the third quarter. The Bears inched up 17 yards in their first drive but were forced to punt after Swofford was set back by two back-to-back sacks.

The Indians were just as shaky and gave up a fumble which bounced out of play, saving them from a turnover on their first-and-10.

The Indians tried a left-sided pitch on the Bears’ 19 but were met with a fumble recovered by the Bears.

“They really exposed some things we do and exposed the way the we play it,” said coach Swofford. They knew if they worked off that and pitched it to the edge, we didn’t have a guy. I felt like we got better at that and we made some adjustments and the halftime and so we’ll be ready for that next time.”

With 5:09 left in the third, Ava started a short drive which ended at their 26 when Swofford threw his first interception of the season to Brayden Stenger who returned it to the Bears’ 44.

Hallsville started the fourth quarter after pushing through the Bears’ defense for 32 yards before the end of the third. They started on the Bears’ 12 and their offensive was out-gunning Ava.

The Indians took the ball to the Bears’ one where they picked up a fresh set of downs which turned into 6 points after the Bears denied their conversion with 9:28 left in the game.

It appeared that the Ava coaching staff turned to playing against time, trying to oust the Indian defense. The Bears managed just three yards in their possession after Josh Bray was flattened on the option at the Bears’ own 36.

With 7 minutes left on the clock, the Bears had to punt, and the disappointment was heard in the crowd.

“There are things that they took away,” said coach Swofford. “Our pitch, and then they closed down on him hard. We were wanting to get the ball to the edge more, but they did a great job kind of funneling us in. Nate took care of the ball well-enough to get some but what he did great was getting the ball to the edge a time or two. Of course, Kayden just finds that line and he’s hard to bring down.”

Josh Bray managed to sack the Indians’ quarterback, and the Bear defense shut down a run up the right side. The Indians took a timeout with 4:50 left in regulation and on fourth-and-1.

Crane managed the two yards needed to convert on fourth down. At this point, some Ava fans were headed to the parking lot, and they missed a heart-pounding finale to Friday’s game.

With three minutes left, the Bears had to do two things. Plus, they had to do them well.

They needed to manage the clock to drain it enough to allow them a shot at the endzone, while giving as little time up to the Indians.

They also needed to find the endzone…

Swofford picked up six on the first play. On second-and-6 the Bears got the break they needed to gain momentum.

A penalty call against Hallsville for a horse-collar tackle. 15 free yards and a fresh set of downs showered on the Bears’ offense, propelling them to the Indians’ 34.

13 yards brought another first-and-10 for the Bears on the Hallsville 20. Striking distance.

Swofford rushed for 12 yards, Myers picked up the last five yards after a timeout from the Ava sideline with 0:57 left.

The Bears’ two-point conversion was foiled, but Myers’ five-yard haul was what the Bears’ needed to get on top.

“The fourth quarter was long one,” said Swofford. “Their coach had a great scheme against us. I was having a hard time get my reads and getting in gaps. I mean it was just a push and Kayden Myers just became our bull. Our linemen also stepped up. We’ve been having trouble getting the front line blocked, but the linemen came up and they won the game for us. I mean the linemen; I can’t brag about them enough. They got (Hallsville) blocked and Kayden Meyers finished it off for us.”

With just 28 seconds left, the Indians’ offensive strategy was obvious. Throw it and pray.

On their own 32, a long pass was nulled by defensive coverage by Swofford. On second-and-10, the Indians broke through with a 28-yard pass to the field’s midline.

The Indians figured they had a chance. That was before Zack Mendel leaped up near the Bears’ 30 for his first interception of the season.

“It was just a heat-of-the-moment kind of thing,” said Mendel. “It was amazing. I just found myself in the right spot at the right time and I jumped higher than the (defender) and caught the ball.”

“We had a little luck they when they fumbled the ball and that gave us a chance,” said coach Swofford. As cliché as it is, they have heart. They don’t have any give up.”

This evening, the Bears are up against the Mountain Grove Panthers. The SCA Conference and MSHSAA District rival is currently 0-2 with losses from Strafford (21-6) and Fair Grove (29-7).

The Panthers are in a two-year slump against the Bears. The Ava football team served the Panthers two losses in 2017 and another least year, 28-12. 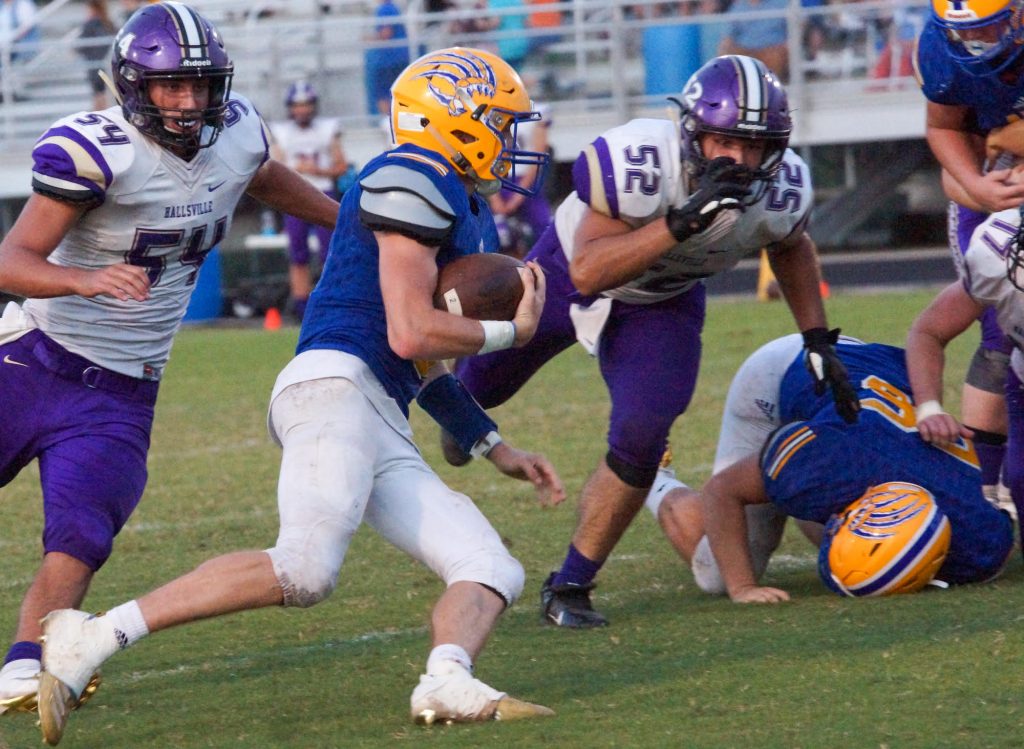 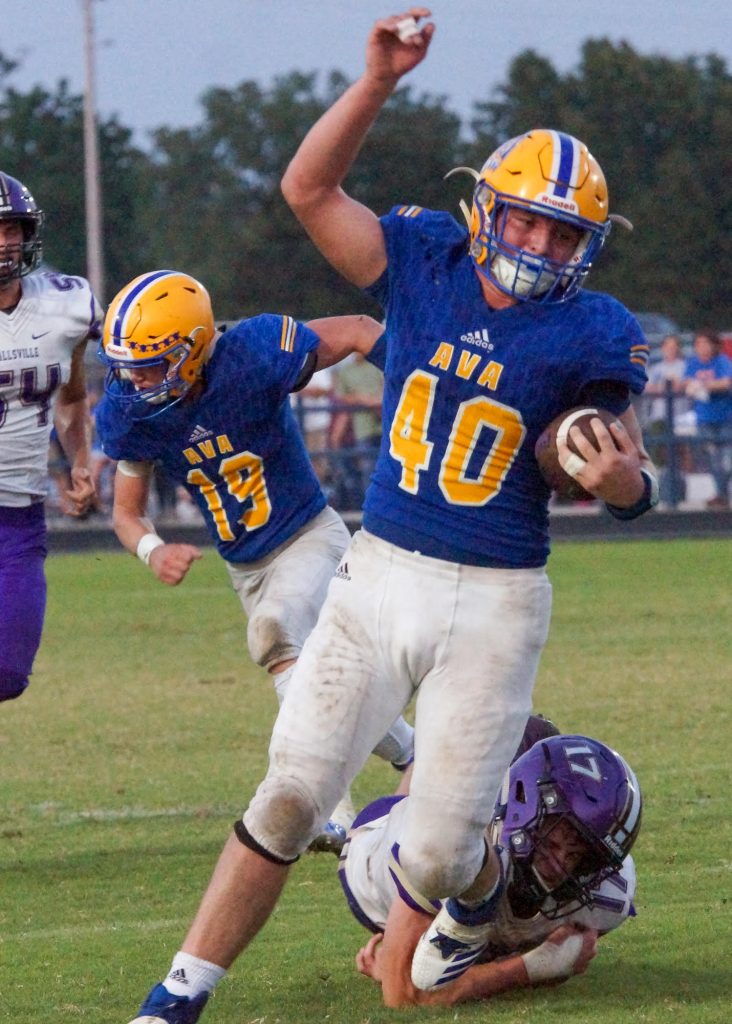 Ava High School running back Kayden Myers (40) breaks from a tackle attempt from defender Cooper Crane during a non-conference, non-district game against the Hallsville Indians on Friday, September 6, at Harlan Stadium in Ava. (Kayla Dry/Special to the Herald) 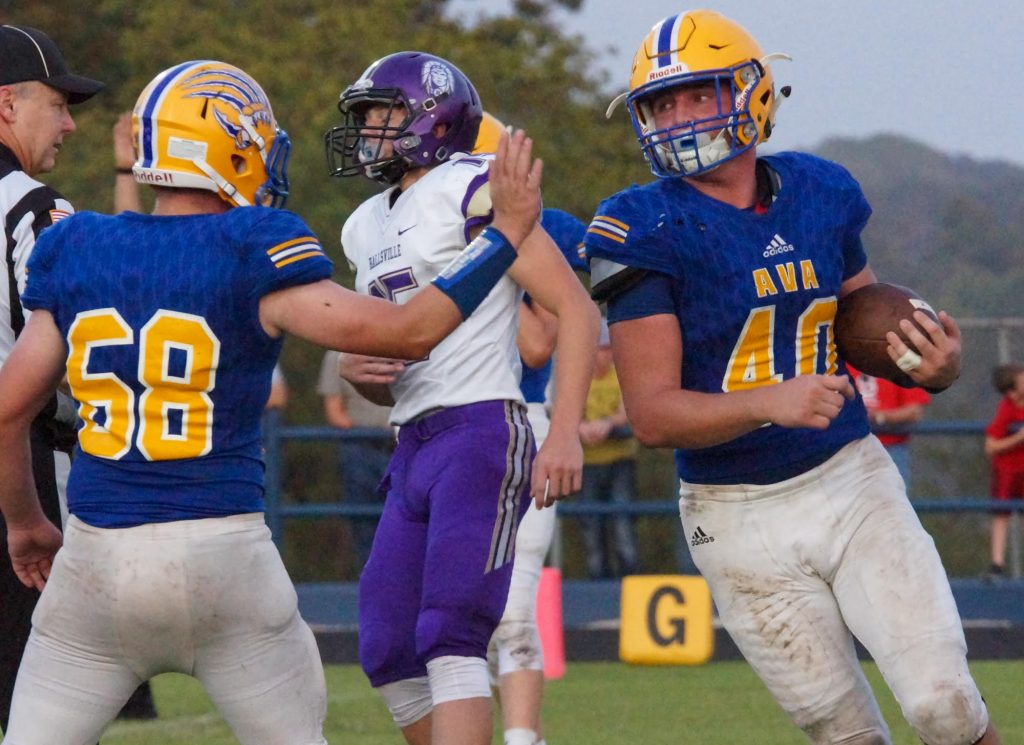 Ava High School running back Kayden Myers (40) turns to the sideline after scoring a touchdown during a non-conference, non-district game against the Hallsville Indians on Friday, September 6, at Harlan Stadium in Ava. (Kayla Dry/Special to the Herald)